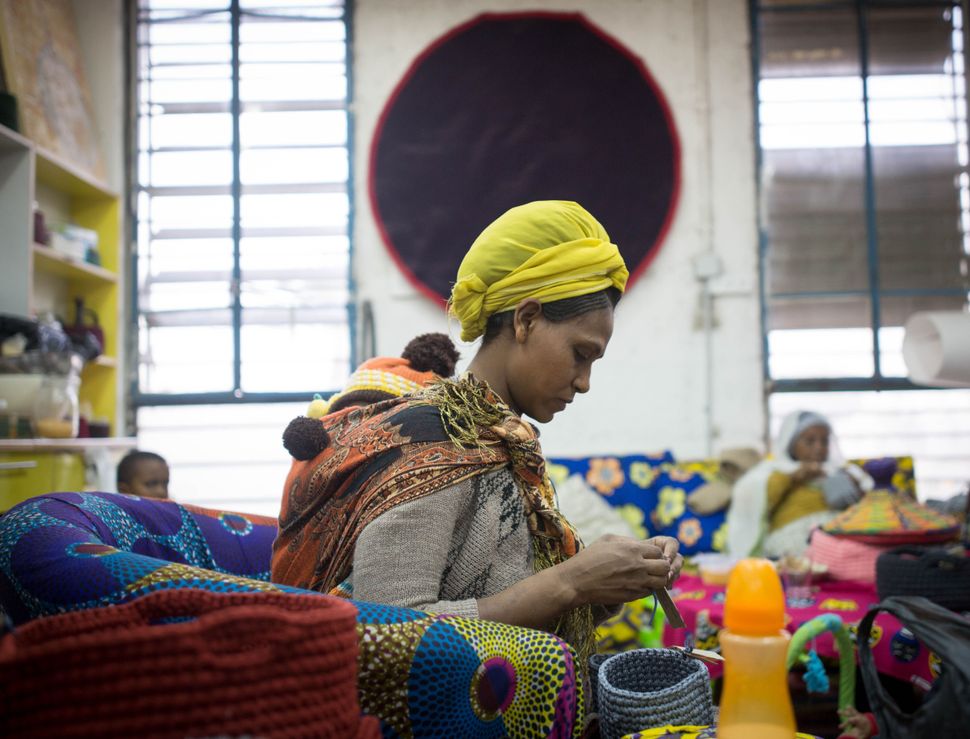 Kuchinate Image by Courtesy of Kuchinate

“We don’t have rules. We want the women to feel at home here. If someone comes every day or if they haven’t been for a year, it doesn’t matter,” says Sister Azezet Kidane, co-director of Kuchinate, an African refugee women’s collective in Tel Aviv.

The women at Kuchinate, which means “crochet” in Tigrinya (the language spoken in Eritrea), design and make eco-friendly cloth baskets and other products for the home such as place mats, poufs, rugs and hanging baskets for plants. Kuchinate also hosts crochet lessons, traditional Ethiopian and Eritrean meals and coffee ceremonies to visiting Israeli groups and has now extended these initiatives to b’nei mitzvah and their families.

Since its establishment in 2011, Kuchinate has dedicated itself to helping asylum-seeking women, most of them single mothers, for whom the crafts empowerment project is their sole source of income. Over 200 women are involved in the project, mainly from Eritrea and Sudan but also Ethiopia and Nigeria — many are survivors of the torture camps in the Sinai, human trafficking and sexual abuse.

“All the women who come have problems — physical or psychological. Several also have sick children,” Kidane says, cradling a baby in her arms. “When they came to Israel, they were hoping that everything would be OK, but their problems increased. They thought they would be able to work, pay their debts, but the trauma of their journey and their experiences, paralyzes them.”

Kucinate is located inside a foreboding Brutalist building on a busy main road in the heart of industrial south Tel Aviv. The project’s logo, painted in orange on a dank stairwell wall next to some graffiti, indicates the entrance to the bright, welcoming studio. Shelves of colorful baskets line the walls and, at the far end, about a dozen women sit on sofas covered with African fabrics. Sunlight and activity flood the cramped space and a number of women crochet while chatting to one another. Others sit quietly. A pot of coffee is brewing and bowls of freshly made popcorn are being passed around as well as himbasha, an Eritrean and Ethiopian celebration flatbread, often served at special occasions — the day of my visit is the Feast of St Michael.

Kidane, known as Sister Aziza, is an Eritrean nun and a member of the Comboni Missionary Sisters and a nurse by training, who has lived in Israel for the past nine years. In 2012, she was honored by Hillary Clinton, then US Secretary of State, for her efforts in combating human trafficking — she had exposed the existence of the torture camps while working as a nurse for the NGO, Physicians for Human Rights. Now and again, she breaks off our conversation to help a new member of Kuchinate who is making her first basket.

Kidane works twice a week at Kuchinate as an advocate and a counselor. “We create this atmosphere of being together, to make them feel that they are not alone. They have the opportunity to come and share their problems and day to day worries,” she says. “They feel that they are consoled, that they are understood.”

The art of crocheting in and of itself is meditative — it refocuses their thoughts, says Kuchinate founder, co-director and clinical psychologist, Dr. Diddy Mymin Kahn. “Research has shown that knitting, not crocheting in particular, has therapeutic value such as a reduction in anxiety.”

Hosting groups and meeting Israelis — selling, teaching and cooking for them — is also therapeutic, says Kahn, because it empowers the women. In addition, these visits help to break down barriers as they enable Israelis to see asylum seekers in a different light: “Not as people doing the traditional work of asylum seekers, such as cleaning houses. They are asked how to crochet; for recipes; if a discount is available. The women learn skills in marketing, computers and how to negotiate.”

All of these things do not necessarily address the trauma the women have experienced, she says, but the project helps build resilience. “If your resilience is good then you’re more able to cope with the hardship that you’ve been through.”

Kahn, a trauma specialist, originally from South Africa, founded Kuchinate following her experience of working with East African asylum seekers who had been traumatized in the Sinai. She realized that a traditional Western approach to treating trauma would not work and a different approach to rehabilitation was needed.

African asylum seekers began arriving in Israel in 2005, the majority coming from Eritrea, having fled life under a harsh dictatorship, or from war-torn Sudan. Many passed through the Sinai into Israel, often having endured dangerous journeys and hardship with some 7,000 asylum seekers entering via kidnappers’ torture camps in the Sinai desert. But in 2014, Israel constructed a 150-mile electronic fence along the Egyptian border and since then, the illegal immigration has stopped.

Israel currently has approximately 40,000 asylum seekers and many live under the threat of deportation. Earlier this year the Israeli government made — then reneged on — an agreement with the UN to have many migrants resettled to Western countries. The government introduced a payout of $3,500 to every migrant who agreed to deportation. Last year, in an attempt to make Israel a less attractive place to stay, a “deposit law” was introduced which requires employers of asylum seekers to hand over 20% of their salaries to the state, which then keeps the money until they leave the country.

“All of our women are in a state of poverty because they have the 20% taken off their salaries. Before that, they were just about on the breadline, now they’re really under it,” says Kahn. Although the women at Kuchinate are not under the threat of deportation — Prime Minister Benjamin Netanyahu has agreed, for now, that women and children will not be deported — the situation has had a profound effect on them. Many of their husbands or male relatives, on whom they rely for financial support, have been detained or deported. Kidane says she is aware of cases where men have taken the government payout and left Israel, leaving their families to cope alone.

The women came to Israel with an understanding that they would receive the help and benefits of a western democracy, says Kahn. “But the opposite happened. We have a lot of women and children with chronic illnesses and disabilities, and because they have no access or the means to pay for these basic services, these things become massive burdens. The situation has gotten worse and worse.”

Hewan Desta, who came to Israel from Eritrea in 2010, is one of the women responsible for teaching new members how to crochet. Although she married an Israeli and has three children, she does not have the legal permission to remain in Israel. Like many women in Kuchinate, she has to obtain a permit to stay every three months. Living with such instability means that many of the women want to leave Israel. “They are suspended, and feel unwanted,” says Kidane.

Kahn believes that all the women at Kuchinate would like to return to the countries of their birth, if it were safe to do so. “They’re nostalgic for home,” she says. “They talk about Eritrea, for example, with a such a sense of longing. They don’t want to be deported by Israel to some third world country where they’ll have no rights. Some of them will probably die.”

They would like to be relocated to a country where they will receive protection, work permits and support, says Kahn, and do not consider Rwanda or Uganda — countries recommended by the government — to be safe options. Kuchinate tries to help them resettle by making referrals to the UNHCR and some of the women have emigrated to Canada, the US and Sweden.

Despite the considerable challenges, working at Kuchinate raises the women’s self-esteem. Whenever a basket is made, whether it is sold or not, they are paid, Kidane says. Several women take on roles within the collective, such as looking after the children (there is a room next door to the studio which serves as a nursery), catering, product design, commissions and sales.

Outside the workshop. Kuchinate sells their products at craft fairs and they have also produced public art installations in Tel Aviv, as well as collaborated with Israeli artists. In April of this year, a group of women worked with Gil Yefman, to present crocheted sculptures for “VIOLATED! Women in Holocaust and Genocide,” a group art exhibition held in New York. Around ten women will be collaborating again with Yefman, says Kahn, creating new work for his solo exhibition which opens at the Tel Aviv Museum of Art on December 4.

As I step out of the studio to examine, “We Were All Once Refugees,” a 3.5-meter high multi-colored mosaic — a collaboration with mosaic mural artist, Mia Schon which had previously been located on Rothschild Boulevard in Tel Aviv — I notice a nervous looking woman standing alone in the passageway. She had come to find Kuchinate and as I take her to meet Hewan, I recall the words of Favor Agbo, an asylum seeker who had come to Israel from Nigeria eight years ago, to escape religious conflict. “At Kuchinate,” she said, “you meet women who have problems and share. It’s like family here.”