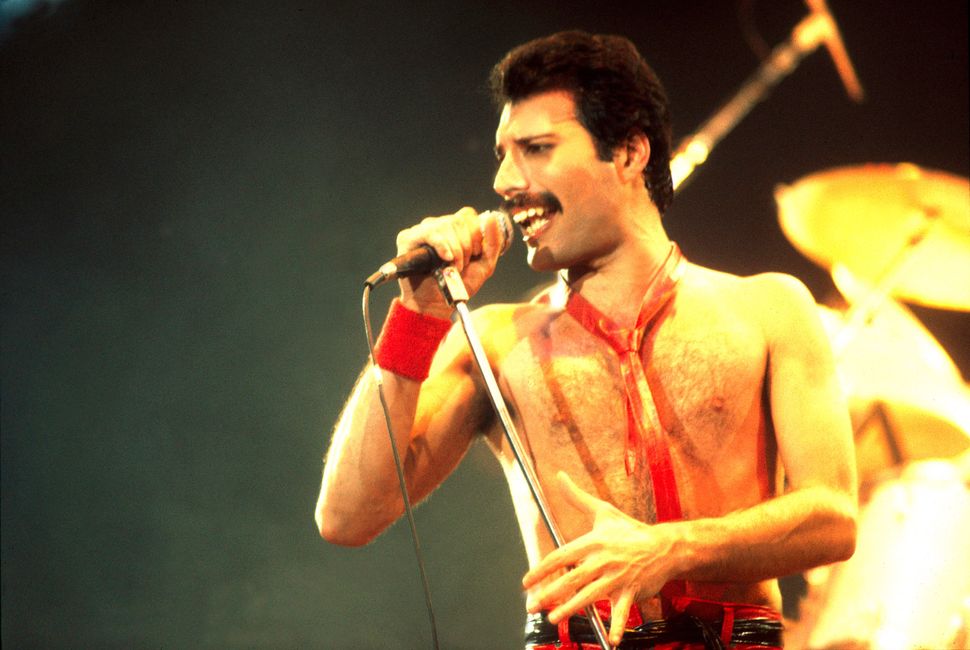 Had things gone the way they were originally supposed to, the lead role of Freddie Mercury in “Bohemian Rhapsody” – the biopic about the rock group Queen that opens on Friday, November 2 – would have been played by Sacha Baron Cohen instead of Rami Malek.

That’s right: Instead of the Los Angeles-born son of Egyptian Coptic Christian immigrants, the man prancing around in underwear and tights portraying the outrageously flamboyant lead singer of Queen might have been the English-Jewish actor-comedian best known as Borat or Erran Morad of “Who Is America?” Maybe there never even would have been an Erran Morad had Cohen gone through with his decade-old plan to write, produce, direct, and star in the film, plans that were scotched when he withdrew from the project citing “creative differences” with the surviving members of Queen, who had final say over everything having to do with the movie.

Had that happened, it would not have been the first time that Mercury, who died of complications of AIDS in 1991, was portrayed by a Jew. For the last seven years, Jewish-American singer Adam Lambert has held the position of lead singer with Queen, ever since Queen guitarist Brian May and drummer Roger Taylor met Lambert backstage at the “American Idol” TV contest. Lambert’s mother Leila is a dental hygienist who boasts Romanian-Jewish roots, which Lambert drew upon when Queen performed before 50,000 adoring fans in Tel Aviv in 2016. During the concert, Lambert peppered his stage patter with Hebrew and Yiddish phrases, including “erev tov,” “todah raba” “oy vey,” “oy vey iz mir,” and “oy gevalt” (he was shvitzing, you see), and guitarist May even wrapped a segment of “Hava Nagilah” into one of his guitar solos. While in Israel, Lambert visited Jerusalem, where he took a selfie of himself at the Western Wall, which he then posted to Instagram.

Queen first garnered public attention in the early 1970s with its unusual combination of hard rock, glam rock, and quirky pop affectations, put across by Mercury’s bombastic vocals. The band entered the rock stratosphere with the operatic mega-hit that lends its title to the new movie. “Bohemian Rhapsody” became the group’s signature song, appearing on what would become the group’s first hit album, 1975’s “A Night at the Opera,” still considered by many to be its best. Not ones to overlook an opportunity or to jinx good luck, the group’s follow-up album, 1976’s “A Day at the Races,” was likewise named after a film by the Marx Brothers. The story goes that Groucho himself was so tickled by the gesture that he invited the band to visit him in March 1977 in Los Angeles, where he reportedly sang the band one of his own songs, and they returned the gift with an a cappella rendition of “39,” a sci-fi song from “A Night at the Opera.”

Queen itself once counted a Jewish keyboardist from Canada as a member of its band. While they rarely worked with guest instrumentalists, the group did draft Fred Mandel, one of the original rock ‘n’ roll Zeligs – he had already worked with Alice Cooper, Pink Floyd, and Cheap Trick — to join them on their 1982 world tour. Mandel continued to work with Queen on their 1984 album, “The Works,” as well as on solo projects by Mercury and guitarist Brian May. After Queen, Mandel went on to play with Supertramp and with his idol, Elton John. Mandel was raised in a fairly observant home in Regina, Saskatchewan, where he attended Hebrew school, before his family moved to Toronto, where he became a bar mitzvah.

Mercury himself was born Farrokh Bulsara in 1946 in Zanzibar. His parents were Parsis, originally from India, where they returned when Farrokh was still young. He grew up mostly in India as a member of the Parsi minority that traces their origins back to Persia and still adheres to Zoroastrianism, which is said to share affinities with Judaism, the most obvious being the similarities between the prophetic figures of Zoroaster (or Zarathustra) and Moses, both of whom were recipients of a Law handed down by God while they were on mountaintops.

Seth Rogovoy is a contributing editor at the Forward. He is writing a biography of George Harrison.