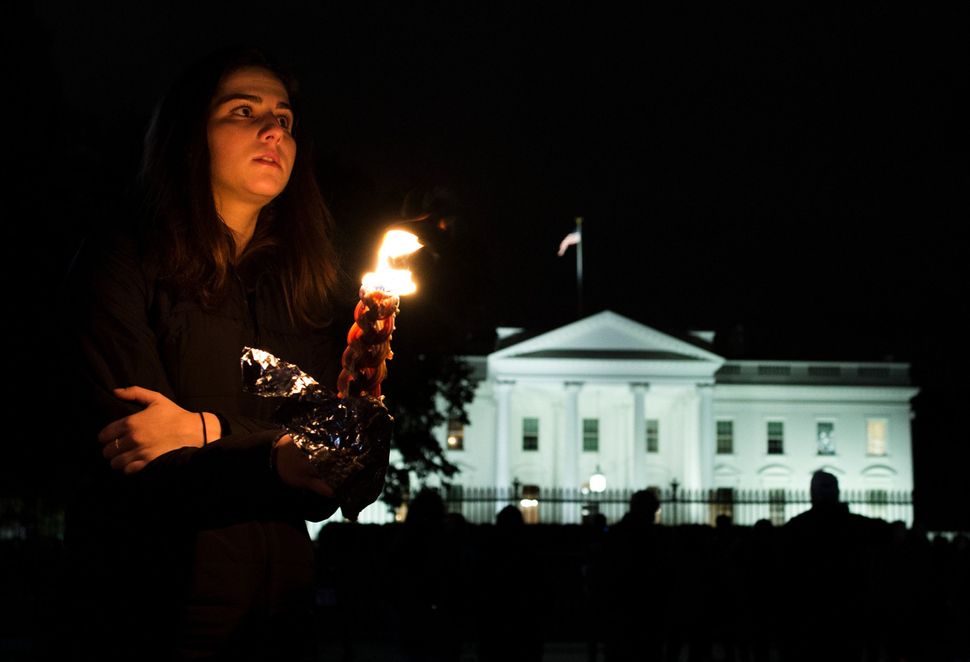 Memorial for Pittsburgh Victims in Washington Image by Getty Images

This week, you will hear many voices telling you not to “politicize” the shootings in Pittsburgh. “I will not politicize the murder of 11 Jews,” celebrity rabbi Shmuley Boteach wrote, before bizarrely connecting Pittsburgh to the Iran deal. “Have a moment of silence, light a candle,” Shmuel Rosner suggested, and don’t “treat this butchery of hate… as an opportunity to advance a political agenda.” Anti-Defamation League (ADL) CEO Jonathan Greenblatt declared that anti-Semitism “isn’t an issue of left, right,” and former ADL leader Abraham Foxman tweeted, “No need to politicize it.”

Ignore them. We Jews have always politicized tragedy; politicization is the engine of Jewish survival, the process by which we take responsibility for our destinies.

It is, for instance, exactly what the writer Hayyim Nahman Bialik did after the Kishinev Pogrom in 1903. Having traveled to Kishinev to interview the pogrom’s survivors, Bialik published — within a year of the pogrom, while the survivors were still reciting kaddish for the dead — his epic poem, “The City of Slaughter.” A century later, the poem still shocks readers, because of how stridently Bialik calls out those he thinks responsible. Bialik blamed the passivity of religion, which he felt made Jews defenseless: in one moment, he imagines Jewish men watching the rape of their wives and praying, “A miracle, O Lord, and spare my skin this day.”

Bialik was livid that Jews had not arisen to defend themselves, and he attacked the rabbis, one of whom “stutters, stammers” through “empty verses.” Not only did Bialik, then, politicize Kishinev: he had the audacity to name enemies within the community of victims.

“City of Slaughter” is painful, even embarrassing to read. Yet it was enormously influential on Jewish politics. The poem made converts to Zionism, but it also inspired Jews in Russia to organize and take up arms in self-defense. In the United States, as Steven Zipperstein’s new book shows, the pogrom helped galvanize advocacy against anti-Semitism and racism. Imagine if Abe Foxman had been around in 1903 to complain about Bialik’s “politicization,” if Shmuel Rosner had given him a sermon about the appropriate way to grieve.

Nor is Bialik’s approach unusual. It was, of course, the tragic trial of Alfred Dreyfus that launched Theodore Herzl as a Zionist. In 1897, of course, when Herzl organized the First Zionist Congress in Basel, Zionism was intensely political: a controversial, minority faction of Diaspora Jews, whom most Jewish leaders saw as dangerously threatening the status quo. Herzl’s genius was precisely his recognition that anti-Semitic violence is political: that it demands a collective Jewish response, that it demands controversy and argument, that it cannot simply be mourned and grieved like an event of nature.

Indeed, it’s not just the Zionists. Go back two millennia, to the destruction of the Temple. The fires had barely cooled in Jerusalem before Jews began apportioning the blame. Josephus faulted the Jewish Zealots, whose hubris led them to kill other Jews and revolt foolishly. Jewish followers of Jesus claimed it was our punishment for abandoning the messiah. The rabbis, over the subsequent generations, compiled a long list of people to blame: Roman collaborators, uncompromising zealots, overly modest rabbis. Ultimately, as Yoav Schaefer and Jacob Abolafia argued, the rabbis were most worried about “the unwillingness, or inability, of the rabbis to challenge the actions of their fellow Jews.” Why was the Temple destroyed? According to the Talmud, because Jews failed to politicize their tragedies.

When someone tells you not to politicize Pittsburgh, then, they are ignoring two millennia of Jewish history. Anti-Semitic violence is not an act of nature; it does not descend from the heavens mysteriously, or rise without warning from the sea. Such violence is the result of specific historical circumstances, of concrete decisions by particular actors: Trump’s xenophobic rhetoric, for instance, or the rest of the Republicans’ conspiratorial propaganda about George Soros. It is connected to broader political patterns: the rise of an ultra-nationalist right, for instance, around the globe.

And most of all, tragedy is a cause for controversy: for saying explicitly which Jews have chosen the right path, which have chosen the wrong. That may be uncomfortable, and it will cause some pain. For those who enjoy the status quo, who find consensus congenial, it will be better to keep mouthing the same platitudes. For those who have allied with the far right, those platitudes serve an extra purpose, obfuscating the question of their collaboration with Jew haters. But the rest of us must politicize. Nasty, unpleasant political argument is the only choice that Jews have ever had, if we want to fight back.