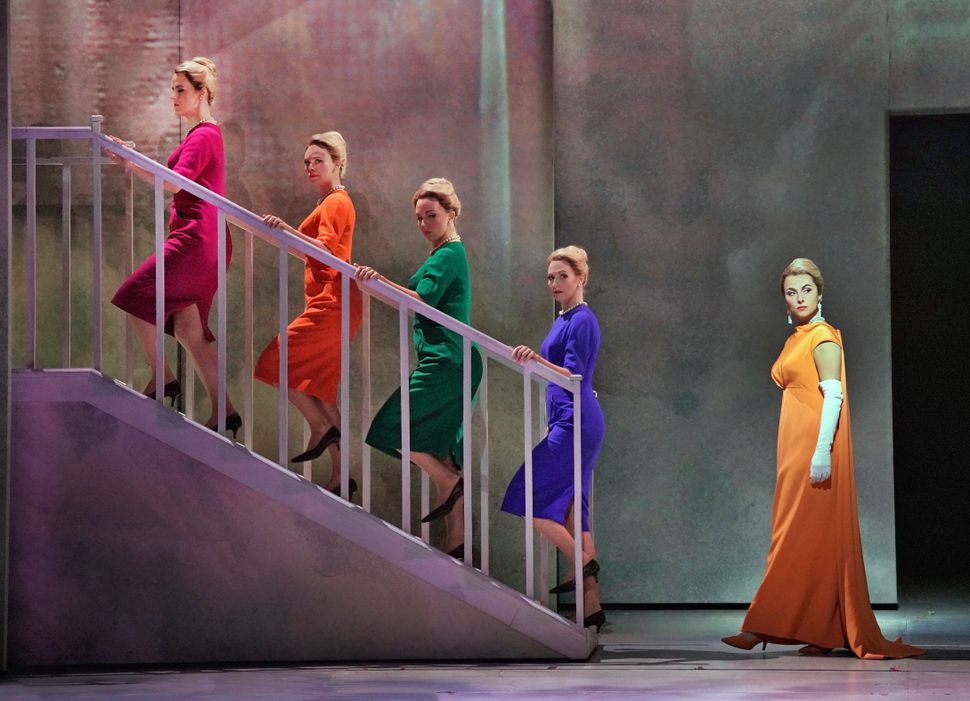 “Marnie” at the Met Opera Image by Courtesy of Metropolitan Opera

Competing versions of the same story can draw one’s attention to the moments of divergence, like to a distinguishing mark or tic. In this way, it seems notable that the eponymous protagonist of Nico Muhly’s new opera “Marnie,” adapted from the 1961 Winston Graham novel that also inspired Alfred Hitchcock’s 1964 film of the same name, is not a natural blonde.

Both the film and opera follow a sophisticated thief who is blackmailed into marrying a man who catches her stealing from him. In Muhly’s opera, now playing in Manhattan at the Met Opera, Isabel Leonard’s Marnie talks — well, sings — us through her decision to change her hair color. She has just knocked off the office safe and needs a new look, but the decision takes on a greater personal import. “What shall I be?” she asks, her decision to go blonde given a certain weight by the time-tested mechanics of operatic fatalism. In contrast, Hitchcock’s Marnie remains fragmented and anonymous until the moment her hair comes into frame. As Marnie makes her escape, we watch her go through the step-by-step process of her getaway, leading to a final coup-de-grace in which she washes the dark dye from her hair, then lifts her head to gaze upon her reflection in the mirror, revealing herself to us at last.

Marnie’s hair does more than give her a style, it places her in a particular, almost ontological category: that of the Hitchcock Blonde. Tippi Hedren follows in the footsteps of Kim Novak in “Vertigo” (1958) and Janet Leigh in “Psycho” (1960), playing a woman whose unblemished exterior belies a deeply troubled inner life. In the vein of “Vertigo” or “Notorious” (1946), “Marnie” is one of the director’s tales of vulnerable beauties psychologically dominated to varying extents by dashing men, each with his own bracing capacity for cruelty. Dealing with the legacies of these illustrious predecessors, “Marnie” brings a good deal of extratextual baggage to the screen. The slowest and most unruly of the bunch, it centers the relationship between Marnie and Mark Rutland, the man who blackmails her into becoming his bride, without so much of the explicit genre concerns of its forbearers. As such, the film gives Hitchcock the opportunity to both interrogate and indulge his own artistic proclivities, an endeavor made still more fraught by the director’s infamous relationship with its star. In her 2016 memoir, Hedren accused Hitchcock outright of sexual assault.

Following up on such a loaded work, Muhly and his collaborators, director Michael Mayer and librettist Nicholas Wright, take steps to both distinguish it from the movie and tweak it in directions more in line with their more contemporary sensibilities. Although Mayer, who first conceived the idea, was inspired by the movie, the opera takes its cues from Graham’s novel, adopting the book’s more diffuse arrangement of competing voices over the characteristically diagrammatic narrative of Hitchcock’s film. While that latter version takes place amid the modernist skyscrapers of the American East Coast, both novel and opera unfold in postwar England. Using a series of projections and moving backdrops, Mayer forges an industrial gothic landscape where Feudal-era class divides still hang around — working with a large, dynamic ensemble, he evocatively dramatizes both the anonymous grind of office life and the fading pretensions of the country gentry, each oppressive in its own way. Still, both staging and score remain more than a little under the influence of the master of suspense: an introductory number uses video projections in a manner that recalls Saul Bass’s constructivist credits sequences, while the post-minimalism of Muhly’s score is infused with brassy swells that scan as recognizably Hitchcockian (or, rather, Bernard Herrmann-esque).

Both versions revolve around an obscured primal scene in Marnie’s past that drives both her kleptomania and, as it turns out, her sexual frigidity, a mystery that comes to stand in for broader questions of her essential identity like a darkly Freudian “Rosebud.” The opera, however, brings us closer to its heroine’s point of view. This is most saliently embodied by characters who exist only in Marnie’s consciousness but share the stage with her and the other actors, including a brightly attired chorus of lookalikes (according to the program notes, the cast and crew took to calling them the “Marnettes”), who act as both her severe inner voice and as persistent reminders of her fractured self. Mayer also brings in a group of suited male dancers, who stand in for the omnipresent male threat (even if their menace is somewhat undermined by their tendency to spontaneously break out with some snazzy moves). In some of the show’s most effective moments, her mental specters intermingle with the masses in a grand chorus, accusing her with a single voice.

Hitchcock, conversely, gives us access to Marnie’s mind only though her responses to external phenomena — things that send her into a mental tailspin, including the color red, which pulses ominously throughout the screen when Marnie is affected. This approach dovetails disturbingly with Mark’s hobby: in the film, he moonlights as a sort of amateur animal behaviorist, boasting of training a rare jungle mammal to “trust him.” Recasting his famous networks of leitmotifs as prodding stimuli, Hitchcock makes the whole business at once more immediate and teasingly abstract. Throughout the film, we’re repeatedly made to venture into the fecund and uncomfortable liminal space between fetish and trigger.

In this way, his Mark, played by Sean Connery — who would appear as James Bond in “Goldfinger” that same year — remains oddly opaque, a sort of cipher for both filmmaker and viewer. While his psyche is no less depraved than Marnie’s — he describes himself wholly accurately as a “sexual blackmailer” and is drawn to her because, not in spite of, the fact that she steals from him — he seems oddly uninterested in examining his own psychology, even while obsessing over hers. Hitchcock, whose thrillers feature quite a lot of psychologizing, allows Marnie to convincingly critique her husband/captor’s attempts to put her on the couch — “You Freud. Me Jane,” she chides — which makes her ultimate capitulation all the more uneasy.

Not only do Muhly and his collaborators both open up Mark’s character — played by Christopher Maltman, he’s a less formidable figure, a wounded widower struggling in his business and naively enamored with our heroine because, in essence, she was nice to him one time—they also split the male element between multiple roles. In what is probably the most salient departure from the film, the opera reintroduces the character of Mark’s cousin Terry (here a brother). Voiced by unnervingly fleet-voiced British countertenor Iestyn Davies (a scene-stealer), he’s a malicious figure out to more unambiguously prey on the protagonist. All in all, Muhly’s vision is more democratic, giving Marnie more ability to hold her own alongside characters more or less as damaged as she is. Twinning each character to a specific instrument within the orchestra, the effect is that of an authentic plurality of voices. By contrast, the narrative architecture of Hitchcock’s film balances on her head as if on a single point. It’s no surprise that the moment when she finally opens up resembles a break.

And so in both works, the revelation of the nature of Marnie’s trauma comes with a sort of resolution. In the opera, she’s given a degree of personal closure even at the expense of her liberty. “I’m free,” she sings as the cops wait to take her away. In Hitchcock’s version, the boy and girl end up together — it’s the Hollywood way, after all — but as far as happy endings go, it’s pointedly unconvincing. “Oh Mark, I don’t want to go to jail,” she admits, “I’d rather stay with you.” Faint praise indeed, and wholly in accordance with the logic that got her into this mess in the first place, insinuating that as her wits return, their troubles will as well. And so the cycle repeats, and the same old story will go on and on.