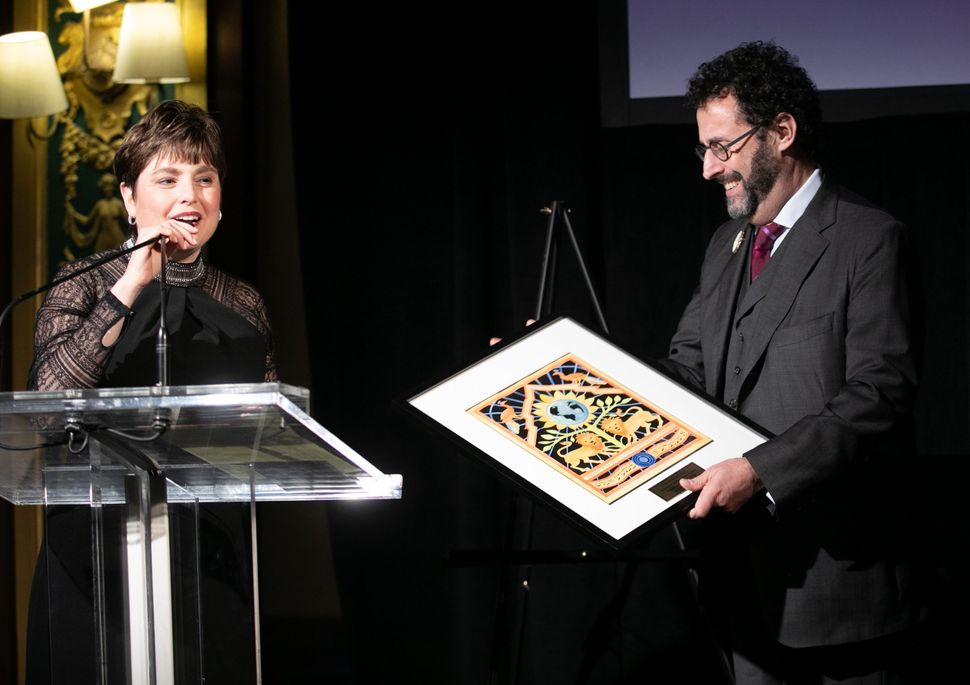 If you were looking for proof that for a certain portion of liberal American Jews, secularism remains as deeply held a value as support for workers’ rights and an immoderate love for klezmer, you might have found some evidence at the Workmen’s Circle’s 2018 gala, held in Manhattan on December 10.

“Cheeseburgers?” a waiter offered a trio standing together. A woman with an elegant, lean face reached for one of the pert sliders, then registering their treyf contents, withdrew her hand and grimaced. Another waiter circled by, offering pigs in a blanket — the hot dogs were presumably Hebrew National, but still: Pigs! — and she sighed.

The evening’s honoree, Tony Kushner, Pulitzer Prize and Tony Award-winning playwright of “Angels in America,” didn’t appear troubled by the show of irreligious solidarity. Accosted in the VIP section, where he stood beneath an electric menorah lit to the fifth night of Hanukkah, despite the fact that the holiday had just ended, he told a journalist what he thought the greatest issues facing contemporary Judaism were. Would it be intermarriage? Israel? A lack of youthful religious engagement?

“The single greatest issue facing everyone is, I would say, the planet, but in the United States [it’s] to save democracy from the threat posed by Donald Trump,” he said. “Democracy, which I persist in believing is the greatest hope for everyone, including Jews.”

Democracy was a theme of the evening, as its attendant liberties — workers’ empowerment, women’s rights, the ability to eat a cheeseburger next to a rabbi — are a central focus of the Workmen’s Circle.

That organization, Kushner said “provides a through line of modern Jewish progressivism.” He wiped his hands on his suit, a grey three-piece number worn with a raspberry tie and, on his lapel, a large, pale ladies’ cameo pin, which he wore as a tribute to his ferociously pro-union grandmother. She had worked as a seamstress in a sweatshop near the Triangle Shirtwaist Factory, and witnessed the aftermath of that factory’s devastating 1911 fire, which killed 146 workers. But after covering the most alarming threats to modern Jews, Kushner told a different story about stitchery, responding to a question about the very detailed, very terrifying pillows he had recently needlepointed for his husband, the journalist Mark Harris. They featured two stills from “The Shining,” and were a birthday gift about which Harris had rightfully crowed on Twitter.

My husband designed and needlepointed these masterpieces and gave them to me for my birthday. It took him a year! pic.twitter.com/LhtFiaCx2Z

Needlepoint, Kushner said, “is very relaxing.” The activity, he said, reminded him of his tailor ancestors, like that redoubtable grandmother. Yes, he clarified, it was relaxing even when its subject was objectively horrifying.

His interlocutor left him to waiting adherents. On a small stage, a three-piece band played “Moon River,; a screen above them displayed laudatory missives to Kushner and the Workmen’s Circle. American Income Life congratulated Kushner on being “honored for your many talents” — and they didn’t even mention the needlepoint.

No matter how much glitter may be present, there is no such thing as a Jewish society event untainted by grief. When the screen advertised an upcoming Workmen’s Circle trip to Lithuania and Poland, the woman who had rejected the cheeseburger said she would love to go on the tour. In fact, she had almost done so the previous year. But her family was from Poland. “I don’t know if I can face it,” she said.

And while the Klezmatics eventually performed a number, with lyrics by Kushner, that pianist and vocalist Lorin Sklambreg described as “Benjamin Cardozo’s love song to American law,” their first selection — another Kushner collaboration — came from a sweet and sad musical rendition of “The Dybbuk.” The Workmen’s Circle preaches a devoutly American method of realizing a set of Jewish values that can often appear eternal. But before liberalism and secularism came the old country and the old customs, mystery and grief.

So Kushner has noted in his work. At the start of “Angels in America,” a rabbi, delivering a eulogy, notes, “Your clay is the clay of some Litvak shtetl, your air the air of the steppes.” The dead woman “worked that earth into your bones, and you pass it to your children, this ancient, ancient culture and home.” But when Kushner took the stage, it was with the vigor of the forward-looking, those who see history as a fuel rather than a dictate. Earlier, he had told the journalist of his appreciation for the deep connection “between Jewish ethical teachings and social progress.” His grandmother’s radical politics, he said, had been a gift to him. But they were one that he elected to accept. Grief may be inevitable. But progress is a choice.