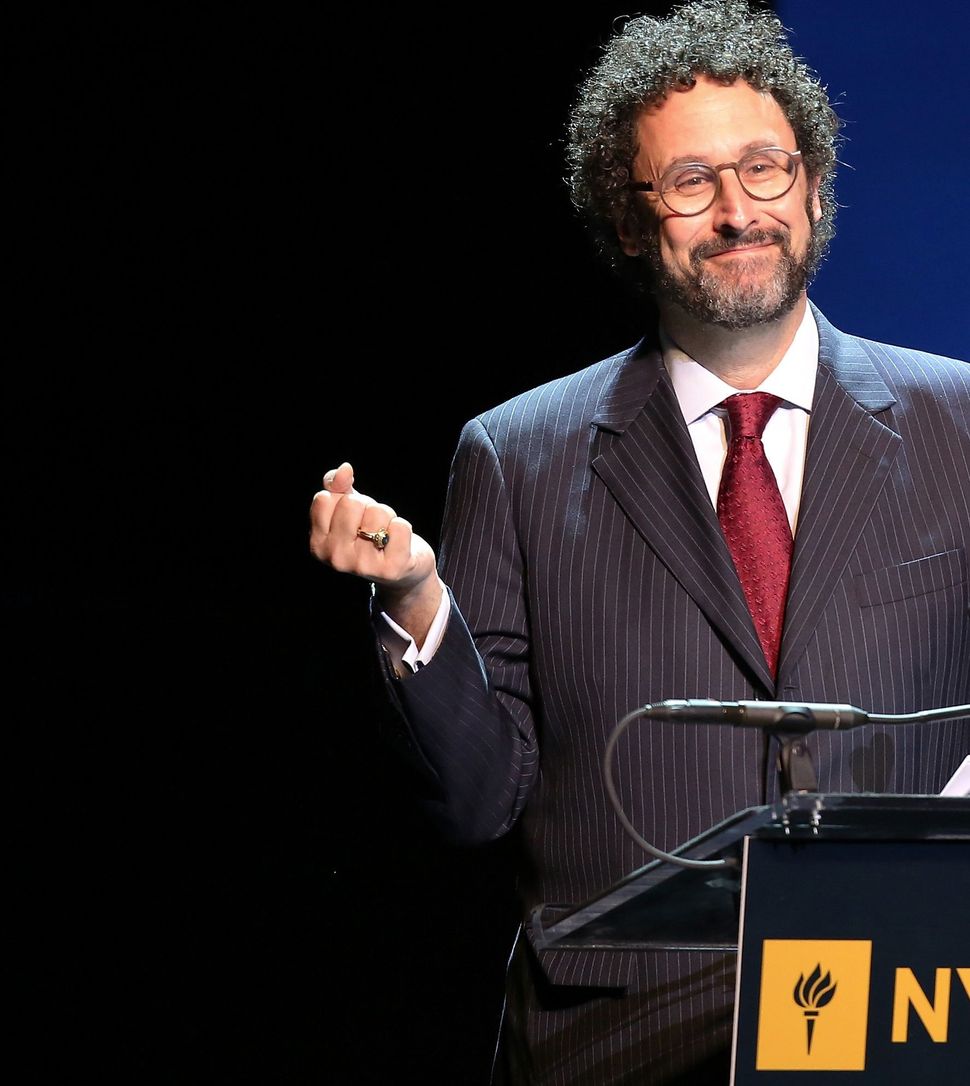 Donald Trump, when he was elected president, likely didn’t expect that he would come to dominate America’s theater scene.

Yet between the Public Theater’s headline-making representation of a Trump-like despot-in-the-making in “Julius Caesar,” playwright Robert Schenkkan’s imagination of a Trump-created dystopia in “Building the Wall,” and the rushed import of a British stage adaptation of “1984” to Broadway — not to mention the creation of resistance movements like “The Ghostlight Project” within the theater world — Trump has become a lightning rod for American theater.

Now, Tony Kusher — who’d like to emphasize he is no relation of Jared Kushner’s, thank you very much — is jumping into the fray.

In an interview with the Daily Beast’s Tim Teeman, Kushner revealed that he is writing a play about Trump, set two years before the 2016 election.

Yet for all that the president has drawn (mostly unfavorable) comparisons to a Shakespearean character, and for all that he serves as a subject of public fascination, Kushner thinks he’s a challenging central character to write — because he’s just not that interesting.

“I definitely think that incoherence lends itself well to drama, but he really is very boring,” Kushner told Teeman.

“It’s terrifying because he has all the power, but without the mental faculties he ought to have. I think he is seriously mentally ill, and the fact that he is in the White House is very frightening,” he continued.

While Kushner didn’t share many details about the work-in-progress, aside from the time of its setting and his anticipation that it will take some time to finish — “I don’t feel like I have to get something done while he’s still in office,” he said — he gave hints as to its themes, calling “the main problem” “how our country can give such power to a madman and crazy person; how a country commits political suicide — and I don’t think analogies to Hitler are misplaced in that regard.”

He also shared thoughts on the similarities and differences between Trump and his former lawyer and confidant, the late Roy Cohn, who is a character in Kushner’s two-part play “Angels in America.”

(Cohn, who passed away in 1986, gained notoriety for his prosecution of Julius and Ethel Rosenberg and his assistance of Sen. Joseph McCarthy in his infamous persecution of alleged Communists.)

“I didn’t have the sense with Roy that he lost sight of where the divide between fantasy and reality lay, which Trump does, I think,” Kushner said.

“What they share is McCarthy’s belief that you shouldn’t be a small, nervous liar. Make it huge, and never admit it, even if people might scream in your face it about it being a lie.”

Cohn, Kushner said, is unlikely to appear in his Trump play. No word on the same question, yet, regarding The Other Kushner.