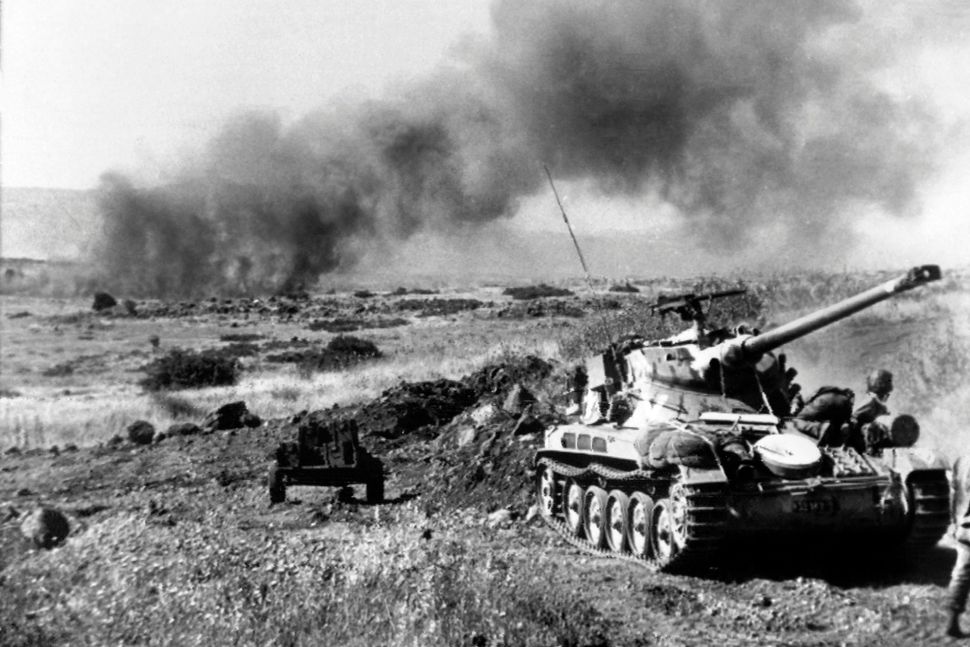 Catch-67: The Left, the Right, and the Legacy of the Six-Day War
By Micah Goodman
Yale University Press, 264 pages, $26

For many Israelis and diasporic Jews, the acquisition of the West Bank, Gaza, Golan Heights, Sinai Peninsula and Old City of Jerusalem in June 1967 fulfilled the hopes of messianic and secular nationalists. Along with expanded borders, however, the Six Day War left Israel in control of more than 1 million Palestinians. After a lengthy debate, the Cabinet of Prime Minister Levi Eshkol decided not to decide whether to annex the newly conquered territories.

In the ensuing 50 years, Israel’s nondecision decision has evolved into a policy of military occupation, the establishment of Jewish settlements and a denial of Palestinian nationalist aspirations.

Two new provocative books examine the historical and ideological underpinnings of the conflict. “Preventing Palestine” focuses on international diplomacy in the period between the Camp David Accords and the Oslo Agreement. “Catch-67” deconstructs the national political debate inside Israel. Both books remind us — if we need reminding — that a comprehensive solution to the conflict between Israelis and Palestinians is nowhere in sight.

In “Preventing Palestine,” Seth Anziska, a lecturer in Jewish-Muslim relations at University College London and a proponent of decolonization and human rights, indicts the United States and Egypt for, in essence, selling out the Palestinians in the Camp David Accords. By acquiescing to the demands of Prime Minister Menachem Begin to condition Palestinian political rights “on a narrowly functionalist and non-territorial definition of autonomy,” and failing to prevent Israel from expanding settlements, Anziska maintains, Jimmy Carter and Anwar Sadat undercut the possibility of Palestinian sovereignty.

This thesis informs Anziska’s analysis of the 1982 Lebanon War, the 1987 intifada and the 1993 Oslo Agreement. Despite occasional cracks in the special relationship between the United States and Israel, he indicates, the Reagan administration enabled and empowered Israel to “intervene and shut down political horizons in the occupied territories,” isolate the Palestinian question “in a larger historical frame of global anti-Semitism,” and dismiss as disingenuous Yasser Arafat’s commitment to accept Israel as a Jewish state and negotiate a two-state solution in good faith. Although the intifada prompted Foreign Minister Shimon Peres to float a “Gaza first” proposal to dismantle the settlements and enter into land for peace talks, Prime Minister Yitzhak Shamir insisted the uprising “changed nothing in our basic situation,” and so he rejected territorial concessions as a threat to Israel’s continued existence.

These days, Anziska notes, “the idea of a Palestinian state — even a demilitarized one — has receded from view,” replaced by political views that are “not necessarily premised on the attainment of equal rights, individual or collective, in either two states or one.” Current realities, he concludes, are “in many ways a twenty-first century revival of earlier iterations.”

Many journalists, policymakers and public intellectuals in the United States and Europe share Anziska’s frustration. They may be less inclined, one hopes, to castigate, as he has, any and all agreements that postponed the issue of Palestinian self-determination. The Camp David and Oslo pragmatists, it’s worth noting, tried to use compromise to establish trust and build momentum for a more comprehensive agreement. They should not, of course, be exempt from criticism. But neither should they be blamed for subsequent events, including the respective assassinations of Sadat and Prime Minister Yitzhak Rabin, that derailed their efforts.

Indeed, as Micah Goodman suggests, when conflicts seem intractable, the modern world at times rewards mediators and combatants who “move from a politics that attempts to change reality toward a politics that finds a way to live with it instead.”

Goodman is a senior fellow at the Shalom Hartman Institute, in Jerusalem and the author of, among other books, “Maimonides and the Book That Changed Judaism.” In “Catch-67” he attributes decisions not to decide to profound differences among Israelis about what to do with the territories acquired in the Six Day War. He claims that in the debate between proponents of security through military force and settlements and advocates of self-determination for Palestinians through an exchange of land for peace, “both have right on their side.” The discourse, he adds, has become “less an exchange of ideas than an affirmation of identities,” producing an “asymmetry between the profundity of the problem and the superficiality of the thinking it provokes.”

Goodman’s title refers, of course, to Joseph Heller’s novel “Catch-22,” in which a World War II fighter pilot pleads insanity to get discharged from the military only to discover that the very fact of his request proves he is sane.

Israel’s “Catch-67,” Goodman indicates, involves choosing between catastrophes: remaining in the territories enhances security while guaranteeing that a Muslim majority will soon reside within the State of Israel; withdrawal transforms the demographic problem into a security crisis.

Faced with “Catch-67” realities, exacerbated by intifadas and acts of terrorism, Goodman writes, left and right have replaced hope with fear. Instead of stimulating humility and an openness to new ideas, “the collapse of ideologies produced the closing of ranks and mutual recriminations.” No longer claiming that withdrawal would produce peace, the left insisted that military occupation would increase human rights violations and the isolation of Israel. No longer claiming that settlements would produce a redemptive “Greater Israel,” right-wingers insisted that withdrawal posed an existential threat to Israel.

In line with his decision to treat the prescriptions of the left and right as equally legitimate, Goodman does not opine about the “rightness” of either or both of these contentions. He also declares that the rallying cries “Let the IDF Win” and “Peace Now” are “equally absurd.” And Goodman fails to address the implications of the decline of the left in Israel.

“Catch-67” concludes with a plea not likely to be embraced by Seth Anziska. The jubilee of the Six Day War, Goodman suggests, presents an opportunity to replace “dichotomous arguments” that led Israeli and Palestinian societies “to a dead end” with “thinking in degrees.” Instead of seeking an imminent end to the conflict and the establishment of internationally recognized borders, Israelis should return to the pragmatism of David Ben-Gurion, “the very force that created the country in the first place.”

To that end, he proposes several initiatives. One option, advanced by Foreign Minister Yigal Allon in 1967, would be to retain an Israeli military presence in the Jordan Valley to provide security. Israel would then evacuate territory between the Jordan Valley to the east and the Green Line to the west, but its demilitarization would be enforced by Israeli troops. A partial agreement based on a partial withdrawal, the deal might produce a partial peace.

A second possibility involves recognition of Palestine, locating its capital in East Jerusalem, expanding areas of self-rule and granting Israeli citizenship to Arab residents of Area C, where many Jewish settlers live. This initiative, Goodman suggests, would bolster Palestinian sovereignty and “create a meaningful process of separation.”

When Goodman pitched these initiatives to audiences on the left and right, the responses left him angry and frustrated. But probably not surprised. After all, as “Catch-67” reminds us, practitioners of ideological politics, who believe rival beliefs are dangerous as well as wrong, are unlikely to find pragmatic proposals fruitful food for thought.