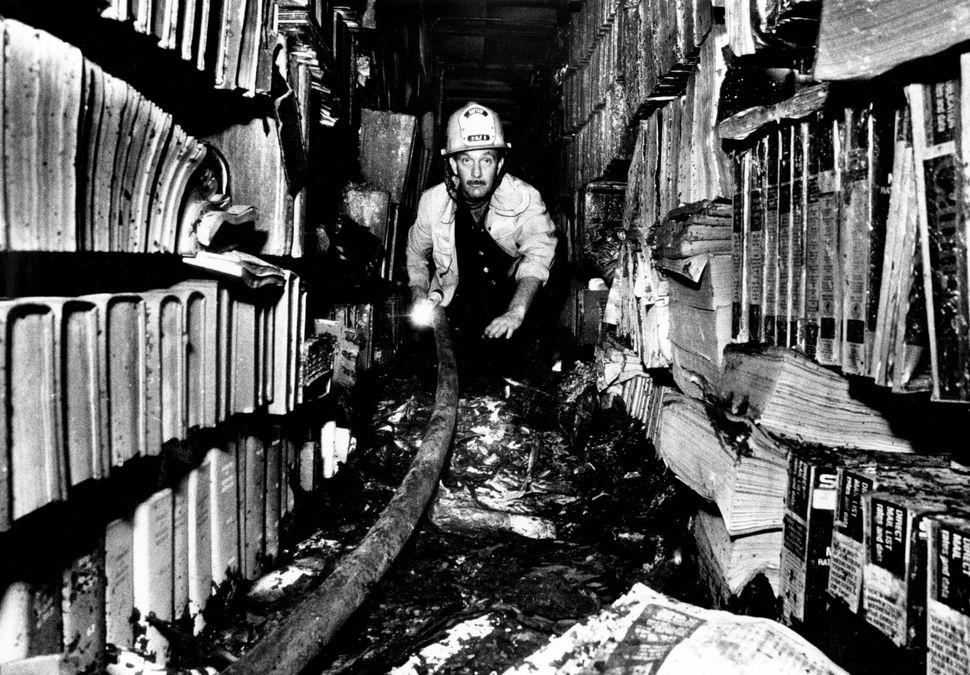 In 1986, a firefighter inspects the damage at the Los Angeles Public Library. Image by Courtesy of Simon and Schuster

On April 29, 1986, a massive fire ripped through the Los Angeles Public Library’s central branch. During the nearly eight hours that the fire raged, temperatures reached 2,500 degrees, 350 firefighters reported to the scene, shelves collapsed,3 million gallons of water were expended, and two acres of plastic sheeting were deployed to try to salvage the library’s treasures. “We thought we were looking at the bowels of hell,” one firefighter said. When it was over, 400,000 books had been destroyed, and another 700,000 were badly damaged. It was the biggest public library fire in American history.

It’s easy to envision a book that would be written about the fire and would be a straightforward procedural that described the events of that day; that tabulated the physical, financial and emotional damage, and that guided readers through the labyrinthine arson investigations and litigation that followed. (An aspiring actor, Harry Peak, was arrested for the crime but never charged. Peak filed a lawsuit against the city for false imprisonment, slander and other charges, and the city countersued for damages related to the fire; both lawsuits were eventually settled via a $35,000 check to Peak from the city in 1991.)

But “The Library Book” by Susan Orlean, who is a dazzling writer and a person of prodigious curiosity, is a great deal more than that. Orlean treats the fire not as just as a subject, but also as a kaleidoscope through which she sees innumerable vivid scenes, ideas, stories and people.

There is, indeed, a thorough account of the fire and its aftermath here. But the book is also about the history of Los Angeles, arson and how it is investigated, Ray Bradbury and his novel “Fahrenheit 451,” The Bill & Melinda Gates Foundations Global Libraries Initiative, and that time in 1942 when President Franklin Roosevelt delivered the keynote address at the convention of the American Library Association and said: “Books cannot be killed by fire. People die, but books never die.”

Orlean spent years showing up at the library and roaming its halls, and she buttresses the story with a portrait of the present-day LAPL, including a profile of its lead librarian and visits to the shipping department, the computer center, the teen section and the map collection, and an account of the quiet, restless moments outside the building each morning before the library opens. At one point, she goes in search of information about Peak, interviewing family members and digging through the life strands of a man who, in Orlean’s words, was a “flawed, self-destructive person who blundered through life” and died of complications from AIDS in 1993. Other sections offer mini philosophical treatises that ponder the very meaning of books, memory and death. (Libraries, she writes at one point, are forever seeking to assemble the puzzle of “the looping, unending story of who we are.”) In one scene, she climbs to the top of a hill and sets a book on fire, then describes the sights and emotions the act elicits.

The book “combines all of the things that I love writing about: how things work, ordinary life, strange people, places, memory, books,” Orlean told me. “It really was a kind of amalgam of all of my interests and curiosities, both as a person and as a writer.”

It’s also one of the most Jewish things she’s ever written. 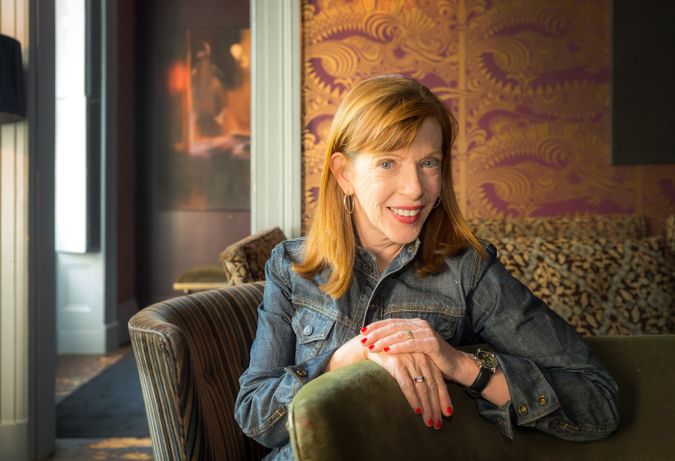 Orlean is the author of eight books, the most famous of which is “The Orchid Thief.” written in 1998. That book was turned into the Oscar-winning film “Adaptation,” starring Meryl Streep as Orlean (or, at least, in the film’s metanarrative, a character inspired by Orlean). But in “The Library Book,” she recalls her desire to step away from writing books. “Working on them felt like a slow-motion wrestling match, and I wasn’t in the mood to grapple with such a big commitment again,” she writes.

But then something changed.

Her visit to the local library with her son evoked memories of the afternoon trips she had taken in childhood to the local library in Cleveland. But because of her mother’s recent dementia, this experience was “bittersweet, because just as I was rediscovering those memories, my mother was losing all of hers.” Orlean credits her mother with being the source of her love of libraries — “Mom, I made a book for you,” she writes in the acknowledgements — and she writes that she embraced the new book project because of a sense that she was losing her mother. “I knew I was writing this because I was trying hard to preserve those afternoons,” she writes. “I convinced myself that committing them to a page meant the memory was saved, somehow, from the corrosive effect of time.”

But to call “The Library Book” merely a return to book writing for Orlean would be a severe understatement. It is a heartfelt, hyper-specific, expansive, deep-reaching praise-song to books, a bible for bibliophiles, a 310-page celebration of these wondrous objects made from paper, ink and glue. “The library is a whispering post,” she writes. “You don’t need to take a book off a shelf to know there is a voice inside that is waiting to speak to you, and behind that was someone who truly believed that if he or she spoke, someone would listen.

“I was struck by how precious and foolish and brave that belief is, and how necessary and how full of hope it is to collect these books and manuscripts and preserve them,” she continues. “It declares that all these stories matter, and so does every effort to create something that connects us to one another, and to our past and to what is still to come.”

It’s not surprising, then, that a book about books (and a book that discusses book burning) would turn to Orlean’s Jewish upbringing. “When you see people kissing a book, and you grow up having people excited to be able to reach out and touch a Torah, I think it begins filling you with that feeling that this is something special,” she told me.

Whatever the exact reason, during her reporter’s odyssey inspired by the LAPL fire — which takes her, at one point, to a conference in Denmark about the future of libraries — the section on Jews and books stands out. “All the wonders and failures, all the champions and villains, all the legends and ideas and revelations of a culture last forever in its books,” she writes. “Taking books away from a culture is to take away its shared memory. It’s like taking away the ability to remember your dreams. Destroying a culture’s books is sentencing it to something worse than death: It is sentencing it to seem as if it never lived.”

Orlean explained to me that being Jewish is fundamental to who she is: It touches who she is, how she looks at the world, how she thinks about things, and what she knows and cares about. Her Judaism, she said, compels her to approach everyday life through a lens of ethics and morality. She explained that although she may not go to synagogue every week, “I feel that I live with that consciousness of moral decision-making, and being responsible to do whatever I can to try to make the world better.”

When a writer chooses a subject, and his or her approach to that subject, that writer is making moral choices, Orlean said. And in this case, she chose to write about a public institution that is free and available to everybody, and she strove to write with empathy and attention for uncelebrated people: “Making a choice to write about libraries rather than, say, thoroughbred horseracing or something that’s very exclusive and not available to most people in the world, that’s a decision that’s very specific.”

Homelessness is a theme throughout the book. “Libraries have become a de facto community center for the homeless across the globe,” Orlean noted. “One of the few places homeless people are welcomed, given access to computers and the internet and permitted to dally all day.” In one brief but memorable chapter, she stops into the Library’s Literacy Center with students from Korea, China, Mexico, Ecuador, Taiwan, El Salvador and Thailand; she then describes a tutor helping a Mexican-born woman study for her U.S. citizenship exam. Later, a librarian confides in Orlean that, back when he was working at a separate branch of the library, drug dealers would come to the library looking for help filling out their tax returns. “He thought it was a perfect example of the rare role libraries play, to be a government entity, a place of knowledge, that is nonjudgmental, inclusive, and fundamentally kind,” she writes.

Is there a place for libraries in the age of smartphones, e-readers and infinite knowledge accessible to anyone with an internet connection? It’s a question that Orlean anticipates in the book, and answers unequivocally: Yes.

“In Los Angeles, the librarians I met were not the dour and discouraged personnel of a dying industry but cheerful and eager individuals uplifted by the conviction that they were doing something important,” she writes. She cites a 2010 study finding that almost 300 million Americans used a local public library or bookmobile during the year, and another study where nine out of 10 people surveyed said that closing a library would negatively affect their community. She points out that young Americans use libraries even more than older folks do, and that nearly two thirds of those people believe libraries contain important materials that aren’t available online. “Public libraries in the United States outnumber McDonald’s; they outnumber retail bookstores two to one,” she writes. “In many towns, the library is the only place you can browse through physical books.”

Orlean sees modern public libraries as much more than just storehouses of printed material. “They have evolved as community centers, information hubs,” she says. Libraries offer genealogical services, literacy programs for immigrants, story time for kids or simply a place to work that isn’t home or the office. Perhaps as proof of this point, many of the events on her book tour for “The Library Book” are taking place at public libraries.

The idea that the internet has replaced any need for libraries scares Orlean. “We wouldn’t want to live in a world where we didn’t want places to gather, places to be together that are public and functional,” she says. In the book, she describes libraries as places that feel like they belong to us, even though technically they aren’t ours.

Toward the end of her book, she writes, “All the things that are wrong in the world seem conquered by a library’s simple unspoken promise: Here I am, please tell me your story; here is my story, please listen.”