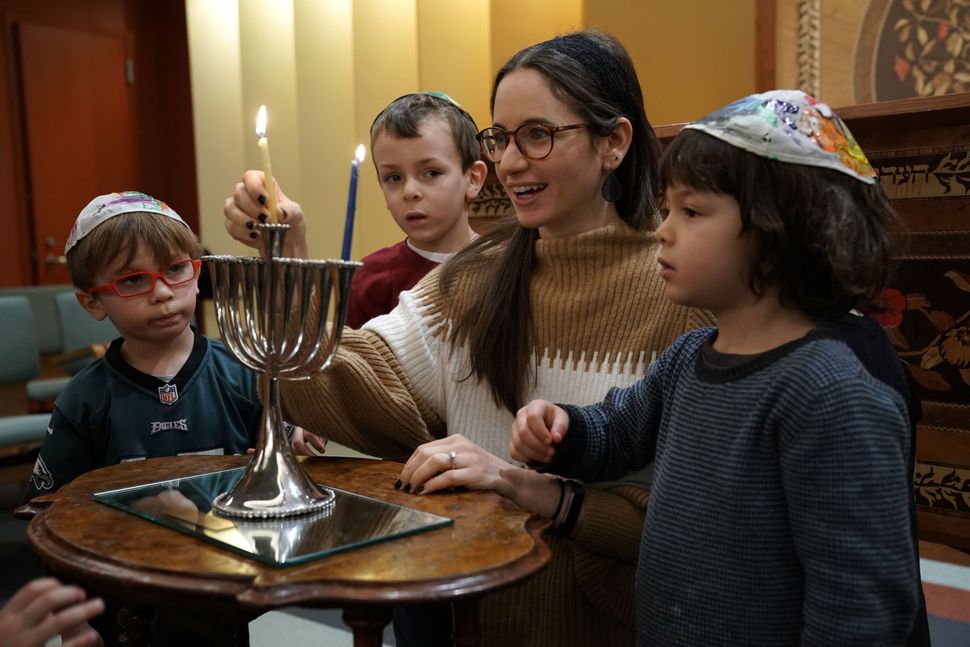 In “The New American Judaism,” Jack Wertheimer, a professor of American Jewish history at the Jewish Theological Seminary and the author of “A People Divided: Judaism in Contemporary America,” draws on interviews with 200 rabbis, survey data and visits to many synagogues to examine the experience of Jews who have lived in the United States. Wertheimer focuses on Jewish religious life rather than on the totality of the contemporary Jewish experience, because religious practices, rituals, holidays and commandments “keep the Jewish people Jewish.” In the absence of pervasive anti-Semitism, he maintains, religious engagement is more likely than any other factor to transmit “a strong Jewish identity from one generation to the next.” Conversely, “Jewish families without religion don’t stay Jewish for very long.”

Drawing on data from a 2013 survey by Pew, Wertheimer reminds us that, compared with the general public and other religious groups, the 4 million Jews in the United States exhibit low levels of commitment. Twenty-six percent of Jews claim that religion is very important in their lives but only 29% percent deem it somewhat important. Six out of 10 Christians and 29% of Jews indicate that they attend religious service at least once or twice a month. Belief in God is less common among Jews than among Protestants or Catholics. The percentage of Jews who attend Passover Seders or fast on Yom Kippur is shrinking, as well.

Several factors contribute to lower levels of belief and engagement. About 60% of Jews have married non-Jews (compared with a 40% rate of intermarriage for other Americans). Non-Orthodox congregations show significant gender imbalances. Thirty-two percent of Jewish millennials claim no religious identification.

Wertheimer agrees that American Judaism’s main “organized denominations” (Reform, Conservative, Orthodox) are having a difficult time attracting and retaining congregants. The broader cultural context, he points out, is antagonistic to institutional religion. Many American Jews value individual autonomy, a search for personal meaning and universal rights; they are skeptical of the authority of establishment leaders; their attention spans are short, and they support the inclusion of previously marginalized groups, including women, gay men and lesbians, singles, intermarried couples and nonwhites.

Wertheimer does not accept the claim that Orthodox, Conservative and Reform leaders have resisted change and that, as a critic once quipped, they are best characterized, respectively, as “crazy, hazy, and lazy.” In “The New American Judaism,” he describes and assesses significant changes in practices and worship services implemented “across the board.” Richly detailed, engaging and judicious, his book should command the attention of anyone interested in Judaism in the United States in the 21st century.

Unconstrained by Jewish law, or Halacha, Reform synagogues, Wertheimer notes, have “mixed and matched whichever aspects of Judaism resonate to forge highly idiosyncratic forms of Judaism.” Some congregants wear yarmulkes and tallit; some do not. Services are short on Friday night and on Saturday. Some synagogues eliminate siddurs, and they also project prayers (and translations) onto large screens. They replace traditional music with rock, jazz and folk. They sponsor food-centered social events on ski slopes, hiking trails and desert sites. Most important, “they have cornered the market of intermarried families”; fully one-third of Reform synagogue members are intermarried.

Short-term gains, Wertheimer asserts, have come with “a very high price.” Judaic literacy among Reform Jews is very low. Rabbis shy away from identifying individual and communal imperatives and obligations. For these reasons, perhaps, the future of Reform Judaism is not bright: Forty-four percent of synagogue members older than 54 identify as Reform, but only one-third of congregants between 40 and 54 and 21% between 25 and 39 do so.

The proportion of American Jews who identify as Conservative has fallen to 18. “Whipsawed between observing Jewish laws and accommodating new mores,” and failing to coalesce around a coherent religious message, the movement, according to Wertheimer, “shows evidence of having lost its way.”

That said, Wertheimer notes that Conservatives are far more likely than Reform Jews to attend services regularly, observe Jewish holidays, send their children to day schools, give to Jewish causes and socialize with other Jews. Ineffectual national leadership, he adds, makes it possible for individual congregations to “take a pragmatic if not improvisational approach to Halacha,” accommodating those who cannot follow the Hebrew, and welcoming intermarried families. The jury is still out, Wertheimer concludes, on how this approach will fare over time.

Orthodox Jews, Wertheimer reminds us, are not monolithic. They include ultra-Orthodox, or Haredi, whose numbers, thanks to high fertility rates, are growing; Modern Orthodox, and Sephardim, whose numbers are shrinking. Surprisingly, perhaps, the ultra-Orthodox and Orthodox have reached out, aggressively, to recruit Jews to their cause. Their efforts, Wertheimer suggests, are “all the more remarkable,” given Orthodox hostility toward social media, as well as a willingness to work around halachic directives about who may be counted in a minyan, appropriate dress for men and women, and whether to welcome to Shabbat dinner an individual who arrived by car. That said, Wertheimer acknowledges that outreach has touched hundreds of thousands of non-Orthodox Jews.

Having reviewed efforts to make Judaism more relatable, Wertheimer asks how much accommodation is possible without distorting Judaism’s distinctive teachings, and whether Judaism can flourish as a pale imitation of the dominant culture.

Relegating religious practice to synagogues, he writes, is “not only unfaithful to the teachings of Judaism, but deeply destructive.” Jews, after all, “must live their Judaism at home, in the workplace, and in all the settings of their lives.” Nonetheless, he maintains that synagogues are “irreplaceable institutions” that play an essential role in fostering the “thick culture” of Judaism and in creating “a plausibility structure” for religious community that serves “as a counterweight to the modern preoccupation with autonomy,” to the likelihood that Jews will not live close to one another, and to the erosion of allegiances to “peoplehood” based on kinship.

Wertheimer concludes with a warning presented as a hope. If Jews find “sustenance and inspiration in old/new commitments to Jewish memory, community, and particularistic content,” they will be able “to create the next iteration of old/new Judaism.”