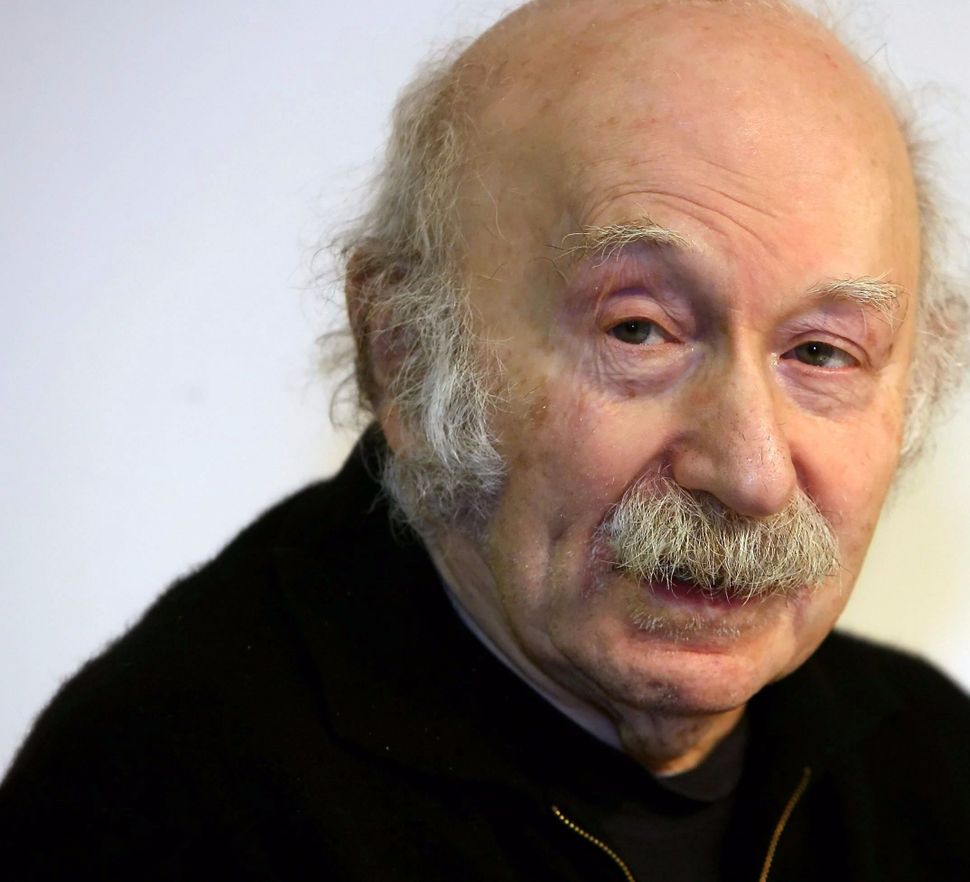 Edgar Hilsenrath, a German Holocaust survivor and novelist celebrated for his trenchant and satirical books on genocide and life in the Jewish ghetto, passed away Sunday at a hospital in Wittlich, Germany. He was 92.

Hilsenrath was born April 2, 1926 in Liepzig to David Hilsenrath, a furrier, and Anna Hilsenrath, née Honigsberg. As he grew up in the city of Haale, The New York Times reports that Hilsenrath knew by the age of 14 that he wanted to be a writer. The years to come would provide him with his major subject.

In 1938, before Kristallnacht, Hilsenrath’s father left for France and sent 12-year-old Hilsenrath, along with his brother and mother, to live with his grandparents in Siret, Bukovina. In 1941, German-allied Romanian troops secured the territory and deported Hilsenrath and his family to the Mogilev-Podolsk ghetto in what is now Ukraine. The Washington Post writes that the Hilsenraths, who were transported to the ghetto in a cattle truck, sewed valuables into their clothing.

Hilsenrath told the German paper Der Spiegel that his deported group was lucky in that their leader knew the commander in charge of the ghetto. That commander allowed the 40 Jews from Siret to live in an abandoned schoolhouse; more importantly, he gave them all papers to keep them from further deportation. He also turned a blind eye when they sold their smuggled valuables on the black market.

Hilsenrath’s wartime experience informed his first novel, “Night” – not to be confused with Elie Wiesel’s better-remembered book about Auschwitz and Buchenwald — which he wrote while working as a waiter in the 1950s. That book is an unsentimental and brutal chronicle of ghetto life focused on the character of Ranek, a lower-status member of the restricted society than his author had been. Hilsenrath told Der Spiegel in 2005 that he “wanted to describe the ghetto’s lowest social level,” possibly due to a “guilty conscience” about his relative privilege and ultimate survival.

“Night,” published in 1964, was notable for its refusal to paint a saintly portrait of Jews by, for instance, including Jewish characters that are rapists. The Post reports that the book generated considerable controversy in West Germany. Hilsenrath dismissed the criticism, telling Der Spiegel “the Jews in the ghetto were every bit as imperfect as human beings anywhere else.”

In 1944 the Russians liberated Hilsenrath’s ghetto; Hilsenrath credited them with impeccable timing, saying their approach stopped a firing squad. After that reprieve — which Hilsenrath found all the more memorable for a Russian soldier’s offer of a cigarette, and thus the introduction to his lifelong vice — Hilsenrath left for a kibbutz in Mandatory Palestine, where he caught malaria. He reunited with his family in Paris after the war.

Hilsenrath immigrated to New York in 1951; in addition to being a waiter there, he worked as a porter to support his writing. Hilsenrath became a citizen in the States but returned to his native Germany in 1975, citing his frustration with living in a land dominated by English.

He published his popular follow-up to “Night,” “The Nazi and the Barber” in English in 1971, but despite his homecoming, it took six years and the rejection of 60 publishers for the book to be released in the original German. When it finally appeared in Germany in 1977, the book provoked readers with the darkly comic story of SS Officer Max Schulz, who kills his Jewish childhood best friend, moves to Israel under his dead friend’s identity and becomes a Zionist hero and hair dresser in the Jewish State. The German edition removed a final scene in which Schulz blames God for his failure to intervene in the Shoah. The Post reports this elision was due to Hilsenrath’s fear the scene appeared to absolve the German people.

The book received more favorable attention than its predecessor. In a review, the Nobel Prize-winning writer Heinrich Böll praised its “gloomy and quiet poetry,” despite having to overcome a “threshold of disgust” to finish reading the novel.

Hilsenrath was unafraid to make readers uncomfortable. He was openly critical of Germans’ tendency to idealize Jewish victims, a philosophy he extended to other victims of genocide throughout his career. In 1989 he wrote “The Story of the Last Thought,” a tragi-comic novel about the Armenian genocide that includes a passage about a nonagenarian’s sexual assault of a 9-year-old Kurdish girl. He cited a friend’s reaction to the scene to Der Spiegel, admitting, “sensitive readers do have problems with my books.”

Despite this squeamish passage, Armenians distinguished Hilsenrath as an honorary member of the Armenian Writers Association for his work on the novel. In 2016 Hilsenrath was also honored by the city of Heidelberg with the Hilde Domin Prize, awarded to German authors whose work addresses the subject of exile.

Hilsenrath continued to write about the Holocaust with books like “Jossel Wassermann’s Return,” published in 1993, and his 1997 autobiographical novel “The Adventures of Ruben Jablonski.” The Times notes that Hilsenrath insisted his literature was meant to equalize the weightier work of other writers on the Holocaust by elevating what he called the “little chattering voices” of everyday Jews. For the author, advancing this project meant being willing to offend, even if that wouldn’t be his first choice.

“If I could, I wouldn’t write like that,” Hilsenrath told Der Spiegel. “I just have a rather perverse take on the events of the Holocaust.”