How Nathan Glazer Dared To Change His Mind (And Ours) 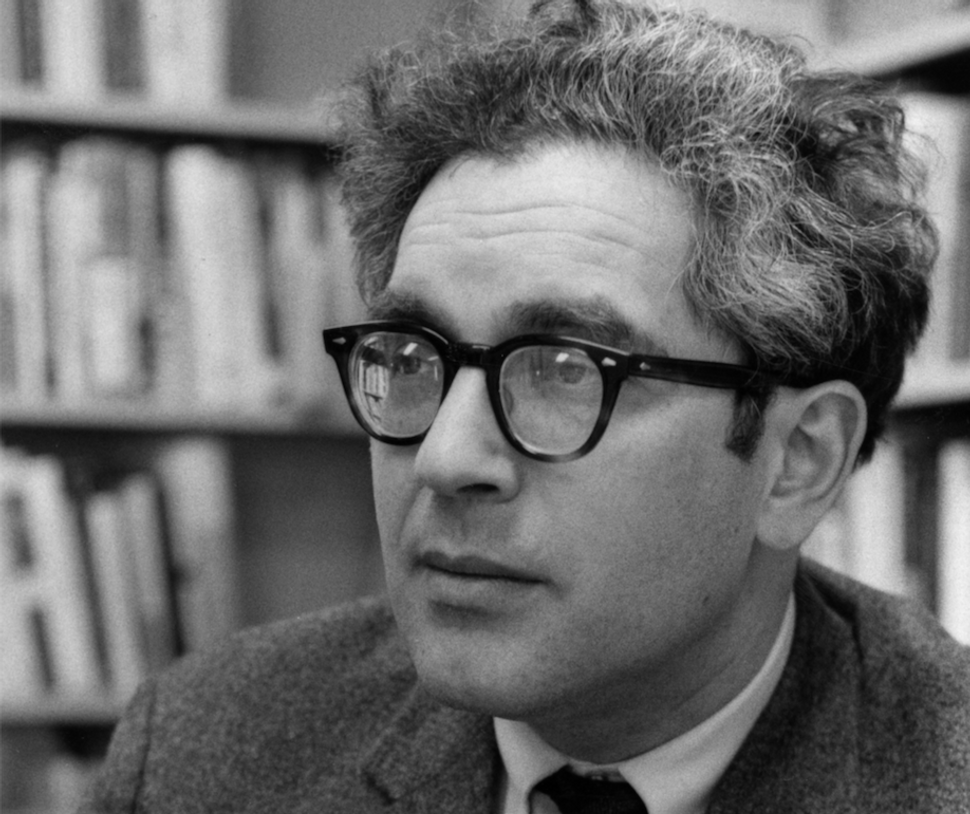 The sociologist Nathan Glazer, who died on January 19 at age 95, proved that thinking is an exercise in modification. Unlike pundits who calcify ideas and opinions to better give readers what they expect, Glazer was constantly reformulating his notions, even after publishing classic books such as “American Judaism,” and “Beyond the Melting Pot.” In his mid-eighties, attending a New York Law School State of Play conference about virtual worlds, he called for more change and diversity in the mapping of virtual reality. He confessed to surprise that computer designers working with limitless possibilities, usually fell back on conservative historicism, recreating medieval villages as background to online fantasies.

Unlike many of his colleagues in academia and journalism, Glazer never allowed his opinions to fossilize. His progressive sensibilities and lifelong modesty about his achievements may have been partly hereditary. As Glazer told an interview for the American Jewish Committee Oral History Collection, (AJCOHC) his Polish-born father Louis was a leftist and an avid reader of the Yiddish Forverts. According to his son, the elder Glazer unassumingly described his job as “sewing machine operator. He eschewed the term tailor, which is a grander term and which he never achieved.”

His family was Orthodox, Glazer specified: “An observant household with two sets of dishes and an extra set for Passover, and two sets of dishtowels, and that was the main definition of observant and so on.” In presidential campaigns, his parents voted for the socialist Norman Thomas, who in the 1930s campaigned unsuccessfully to open US borders to Jewish victims of Nazi persecution. Glazer’s older brother Joe Glazer followed these family traditions, becoming a labor educator and folk singer. Joe Glazer recorded throaty, sincere renditions of songs inspired by the workers’ movement and the Jewish immigrant experience.

Despite such exuberant expression, the Glazer family rejected excesses in politics and religion. Louis Glazer’s most ardent adherence was to Young Israel, the Orthodox youth group supporting the creation of a Jewish state. When Nathan Glazer enrolled in City College in 1940, he was invited by a friend, Seymour Melman to participate in a student organization, Avukah (Torch), organizing support on American campuses for a Jewish state.

Soon, Glazer would encounter many different thinkers, who indicated the possibility of varied ferment of ideas. He earned a master’s degree in linguistics under the supervision of Zellig Harris. The sociologist Daniel Bell (born Bolotsky) pointed him in the direction of the sociologists Max Horkheimer and Leo Löwenthal mainstays of the Frankfurt School of social research, then in wartime exile in New York. Even when Glazer held a modest editorial job at the Contemporary Jewish Record, fate gave him a brilliant office colleague, Clement Greenberg, later an opinionated, influential art critic.

In this time of burgeoning talents, Glazer worked as an editor of Commentary Magazine with Elliot E. Cohen (1899–1959), that periodical’s founder. Yet as Glazer told the AJCOHC, he “always felt like [Cohen] was an overbearing father and I was trying to get out from under.” Glazer would be happier working with the sociologist David Riesman on two landmark books, “The Lonely Crowd” and “Faces in the Crowd.” Riesman’s diagnosis was that modern society made previously self-sufficient people suddenly worry about their neighbors’ possessions. Following these and other projects, Glazer would later be mislabeled a neo-conservative, perhaps by those overly concerned about what their neighbors were thinking. No neo-conservative, Glazer eventually voted for George McGovern in 1972 and Jimmy Carter in 1980.

Glazer eluded all such attempts to categorize him, such as “Nathan Glazer: A Different Kind of Liberal” (1973) an admiring text by Leonard Dinnerstein and ‎Gene Kopel. In 1998, the New York Times displayed further misconceptions by headlining an article, “Nathan Glazer Changes His Mind, Again” as if reformulating thoughts was unheard-of.

Some onlookers have discerned drama in Glazer’s avoidance of being typed intellectually. The documentary filmmaker Joseph Dorfman has starred Glazer in two projects: “Arguing the World” (1998) about prominent Cold War Jewish intellectuals, and in 2017, “Moynihan,” about Senator Daniel Patrick Moynihan.

In addition to Moynihan’s flamboyant careers in politics and a diplomacy, he also wrote the chapter on Irish American experience in Glazer’s study of ethnicity, “Beyond the Melting Pot”. The book’s title alludes to a play by the English Jewish author Israel Zangwill, first staged in 1908. Contrary to Zangwill’s theme of the blending of ethnic identities, Glazer concluded that distinct identities survived among Jews as well as other minority groups in America.

Glazer’s lack of unchanging attitudes made him an especially apt analyst in “American Judaism” (1957), his first major work. Retaining a moderate tone and evenhanded approach, Glazer was no cheerleader. He even warned the reader that in his book, “many things will be said that may hurt Jews.” While his mild, candid tone was not wounding per se, his conclusion that the future of American Judaism was in an ethnic Jewish identity, rather than in religious practice, did raise hackles.

Glazer’s mild skepticism extended to his methodology as a scholar: “We can collect statistics on how many children attend religious schools, how many adults join synagogues,” he explained before asking, “But what really goes on in the minds of people?” Dubious of the value of traditional interviews to gather data, Glazer observed: “Most American Jews are incapable of giving a coherent statement of the main beliefs of the Jewish religion and tend to call ‘Judaism’ whatever views they happen to hold today… were we to limit ourselves to what American Jews say about their religion, or to what they carry on the surface of their minds, how confused and banal a picture we would carry away!”

Instead of such banality, he read the scholarly literature and visited synagogues. He gathered information much as an investigative reporter might, when preparing an extensive journalistic study. Ultimately, Glazer identified a “simple, unreflecting attachment to the Jewish people, a subconscious insistence that the Jews be maintained as a people” despite a tendency for assimilation or overall confusion about identity questions.

Glazer’s statements over the years have caused controversy, especially his 1975 opposition to, followed by acceptance of, affirmative action a dozen years later. Glazer lived long enough for a certain nostalgic aura to be created around him, as in the title of the well-compiled anthology “When Ideas Mattered: A Nathan Glazer Reader” (2016).

His freedom in breaking from orthodoxy of all kinds represents an uncommon liberty of mind. Shifting positions based on changing evidence and related factors, Glazer symbolized the unfettered thinker. He conveyed rare humility in an intellectual world all too rife with egotists. Even in a late book, on the unlikely subject of modern architecture and urbanism, Glazer expressed diffident amusement and asked difficult questions, while nonetheless remaining open-minded.

How Nathan Glazer Dared To Change His Mind (And Ours)