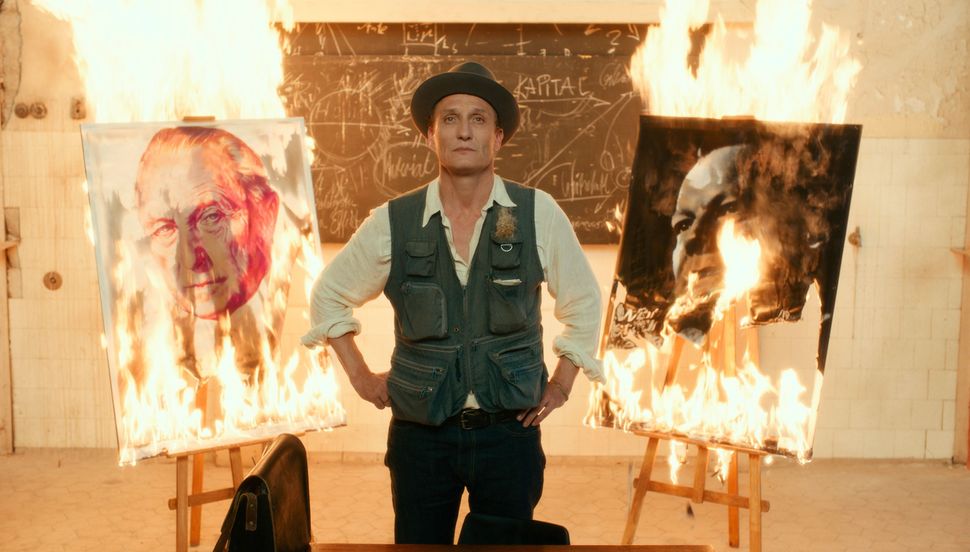 In 2006, Florian Henckel Von Donnersmarck’s first flick, “The Lives of Others,” walked off with an Oscar in the Foreign Language category (after beating out the much favored “Pan’s Labyrinth”). It was a focused, compelling film that explored the lives of two artists and the Stasi agent assigned to keep watch over them in the German Democratic Republic (GDR), circa mid-80s.

Henckel Von Donnersmarck’s latest movie, “Never Look Away,” an Oscar nominee for Best Foreign Film and Best Cinematography, is an epic undertaking (it runs more than three hours and spans more than thirty years), and it also tackles the interplay of German politics, art, private life and destiny.

But unlike “The Lives of Others,” it’s far too ambitious. The thematic threads seem to vie with each other and never form a cohesive whole. Its tone and genre are all over the map too: depictions of Nazi brutality that are almost unbearable to watch and scenes in the art world that border on send-up. Family drama, love story, suspense, mystery, and thriller are also present. Nevertheless the movie offers much to think about, it’s visually compelling, the performances are fine, and two of them are terrific. Loosely inspired by the life of German-born artist Gerhard Richter, an internationally recognized photo-realist painter, “Never Look Away” traces the aesthetic evolution and personal life of Kurt Barnert (Tom Schilling) who grows up during the Nazi regime, finds a fair degree of artistic success in the GDR, but comes into his own when he escapes to West Germany in the post-World War II era, shortly before the Berlin Wall is erected.

The opening scene is set in Dresden’s notorious 1937 exhibition of “Degenerate Art.” Flamboyant Aunt Elizabeth (Saskia Rosendahl) escorts her young nephew Kurt (Cai Cohrs) through the gallery on a tour led by a Nazi guide (Lars Eidinger) ranting on about modern art’s shallow decadence and titillation as evidenced in paintings by such artists as Georg Grosz, Paul Klee, Pablo Picasso, Piet Mondrian, Marc Chagall and Wassily Kandinsky. Aunt Elizabeth whispers to Kurt that she very much likes the work on display especially Kandinsky’s and urges Kurt to “never look away,” which has many meanings given the context.

Aunt Elizabeth is a central figure and ultimately, after her brutal and untimely death, a spectral presence throughout Kurt’s life. She is an embodiment of the “free spirit,” a conceit that’s a tad sentimentalized throughout. Her life-defining motto is “Everything that’s true is beautiful.”

Returning home from the exhibit, Elizabeth and Kurt stop off at a bus terminal so that she and the bus drivers, still seated behind their wheels, can engage in a well-practiced ritual: they honk their horns in unison and she swirls around in unbridled joy. Later, we see her playing the piano nude. In fact, Elizabeth is a schizophrenic and needs psychiatric help. The story takes a particularly grotesque turn when she is forcibly carted off to an asylum where Dr. Carl Seeband (Sebastian Koch, “Lives of Others”), the Nazi doctor in charge, has her sterilized and marked for death when a more “worthy” member of society needs a bed.

In time Dresden becomes part of Communist controlled East Germany where Kurt, now a young man, wants to be an artist, though he makes his living as a mural painter, assigned to depict a happy proletariat in the Soviet-realist mold. Individual artistic expression is as frowned upon under the Communist regime as it was when the Nazis were at the helm.

Kurt meets and falls in love with fashion design student, Ellie (Paula Beer), unaware that her father is Dr. Seeband, the monster responsible for Aunt Elizabeth’s death. He is the personification of an authoritarian personality who, without any difficulty, is able to switch loyalties and become a celebrated, well-heeled gynecologist under Communism. He provides a stark contrast to Kurt’s father (Jörg Schüttauf), who could not abide (let alone flourish in) either regime and commits suicide.

Not unexpectedly, Dr. Seeband views Kurt as a penniless wastrel and does everything in his power to terminate his daughter’s relationship with him, including arranging for her to have an abortion when she becomes pregnant. Dr. Seeband concocts a nonsensical medical reason for the procedure, resulting in damage to her reproductive organs. Patriarchal policing of a woman’s body is a literal fact and metaphorical subtext here. A major problem throughout the film is its coincidences seem to defy credibility, most strikingly, as noted, the fact that Aunt Elizabeth’s murderer turns out to be Kurt’s father-in-law. Such turns of fate on screen (stage or novel) seem like overkill, even though that scenario comes right out of Richter’s life, proving once again that life doesn’t have to be plausible, fiction does.

Richter learned of his father-in-law’s identity when his biographer uncovered the facts and shared the information with him. Similarly Kurt has no idea who his father-in-law is early on, though the film suggests he may have developed suspicions. Growing increasingly dependent on photographs for his subjects, style of painting, and inspiration, he comes across a shot of a former Nazi who might have been Dr. Seeband. The photo is grainy but as Kurt’s painting evolves the figure morphs into Dr. Seeband. Along the way he envisions Aunt Elizabeth and somehow the two are brought together on his canvas. It may seem simplistic and reductive, but in this universe art and truth are synonymous.

Art is a central topic here and regrettably painters (real, fictionalized or wholly imagined) are not necessarily fascinating, and the process of creating art is often less than convincing on screen. A brooding Charlton Heston as Michelangelo in “The Agony and the Ecstasy” didn’t cut it; nor did José Ferrer’s enraged and thwarted Toulouse Lautrec in “Moulin Rouge.” Even Ed Harris couldn’t make Jackson Pollock’s action painting all that captivating in “Pollock.”

Admittedly in “Never Look Away,” the cultural/political milieu is as significant as the artist himself, if not more so, in defining his art. Kurt is appalled at the prospect of doing yet another painting of beaming workers as dictated by the Soviet realist aesthetic and decides to escape to West Berlin. This takes place during the early 1960s when crossing the border wasn’t all that difficult as long as you traveled light and didn’t arouse any suspicion that you wouldn’t be returning. Still, the tension mounts as he and Ellie approach and then successfully make it to the other side where Hitchcock’s “Psycho” is playing. It’s a symbol of western cinematic freedom, a nice detail.

Kurt is accepted into the “progressive” Dusseldorf Art Academy, under the leadership of Van Verten (Oliver Masucci), a shamanistic self-invented guru based on the artist Joseph Beuys.

One can appreciate that the West afforded Kurt far more freedom than the East. After all, it’s where he finds his own voice as an artist, but for Henckel Von Donnersmarck to imply that the institute — most colorfully embodied by the professor, awash in pretensions — wasn’t as authoritarian in its own way (with its own carefully defined dos and don’ts) as the art worlds from which Kurt emerged is just plain false.

Many of the scenes, especially those centered on the professor are hilarious (and more than a little scary), though it’s hard to gauge to what extent, if any, Henckel Von Donnersmarck was intending a parody. At the reviewers’ screening I sat through a number of critics were restraining titters, unsure of whether laughter was permissible.

Still, in the end we know precisely where Henckel Von Donnersmarck is coming from (in case there was any doubt) when Kurt, now a burgeoning artist, pays tribute to his late Aunt Elizabeth. In a Dusseldorf-based bus terminal he approaches the drivers requesting that they honk their horns simultaneously so that he can spin about, joy exuding from every pore. They comply, Kurt performs his little memorial dance, and Aunt Elizabeth’s ritual lives on. To be an artist you must be crazy. It’s tired.

Still, you can’t fault the actors. They are all admirably credible even with roles that seems less than fleshed out. The production is top notch too — from production designer Silke Buhr’s authentic rendering of time and place to Caleb Deschanel’s cinematography that is by turns warm/romantic and stark/brutal. In one stunning montage, including the bombing of Dresden, warfare on the Eastern front and the bone chilling murder of Elizabeth in the gas chambers the horrors of World War II are kindled all too vividly. It’s a memorable editing job too, compliments of Patricia Rommel. The musical composition by Max Richter (no relation to Gerhard Richter) is affecting but not intrusive, a major stumbling block in many films.

Yet, in the end Henckle Von Donnersmark does not really show the interconnectedness of politics, art and personal growth. It’s once over lightly (perhaps that’s inevitable given the scope of the topic) and feels dogmatic. The film’s length doesn’t help. That said if the movie is intended to embody an eclectic cinematic vision — not unlike the art he admires — he has scored. Whether this is cutting edge movie-making, however, is a matter for debate.