A Jewish Girl’s Guide To Getting Dumped By A Doctor 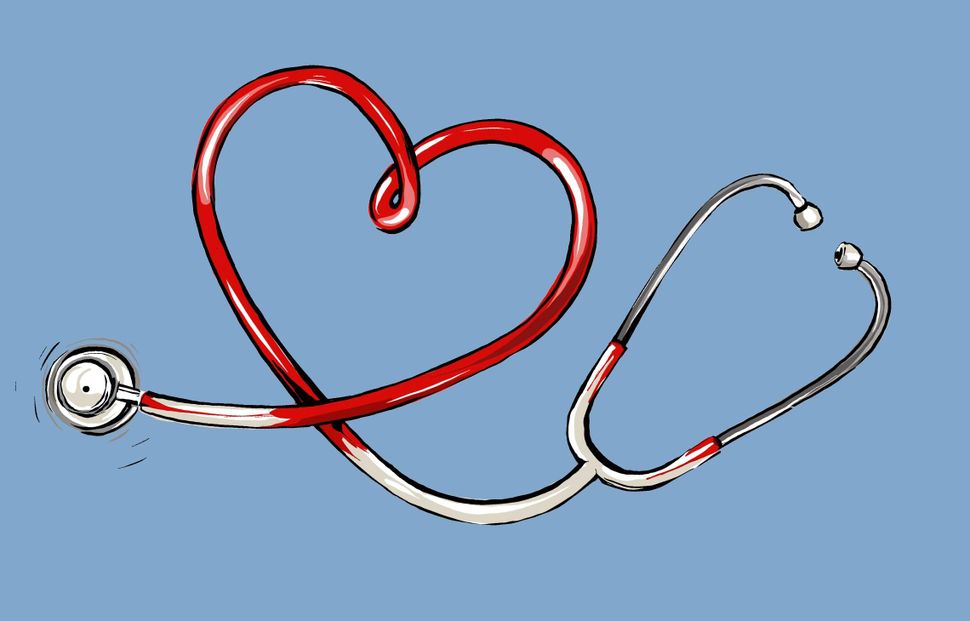 I can’t explain the basic science behind electricity or eyeglasses. I’m not sure if a bull is better than a bear, I have no real understanding of the Constitution, and I don’t think I remember how to do long division.

Plus, most of the time, my hair looks bad.

And yet, I am dating a doctor. I, a nonathlete with a low salary and a dress sense no better than a barnacle, am dating a Jewish doctor!

Well, I was. Now I’m just a woman who once dated a Jewish doctor. Before I hang myself with a stethoscope of sadness, let me explain:

I’ve experienced a lot of rejection in my life. Mostly from local productions of Charles Dickens plays. Rejection from a human man is different, almost more personal. It’s like being told, “As I’ve gotten to know you, I’ve realized that I would rather be alone with my thoughts than spend time in your presence.” And as a Jewish woman, I can tell you there is nothing like being dumped by a doctor. God may as well have dumped you; so intense is the feeling that you have failed your primal communal purpose.

You have to believe me — it really isn’t about money. Like most young doctors, this one was richer in strep cultures than in stock holdings. But I will admit that my attraction to The Doctor did have a kind of pragmatism to it, grown out of an impulse for survival. Instead of yachting off to Amalfi, I fantasized about The Doctor slipping oxygen masks around our children’s tiny faces and bartering medical care for iPhone batteries in the inevitable chaos of environmental collapse. When the future is this uncertain, mating with a human Urgent Care has an evolutionary baseness to it that’s kind of erotic, like watching a baby mouse eat a strawberry.

It has been communicated to me directly and subtly, through example and art, through joking and frank advice, that marrying a man who has a graduate degree in law or medicine would validate my entire existence. Of course, a nice Jewish girl should achieve scholastically, repair the world, and have one child for every concentration camp she can name. But she also should marry a doctor.

The Doctor and I met at a social event. He had the icy blue eyes and lean body of an anthropomorphic cartoon fox. I was surprised that he approached me, even before I knew I was interested: He was attractive enough to sell sports drinks. As our conversation continued, I actually had to stop myself from urging him to shop around a little more. Because a Jewish doctor is a prince: He studies; he passes tests; he learns the secret to eternal life, or at least extended life. And then he takes what he deserves.

So, I was surprised that he took me.

Up until the moment that we were kissing, I was sure that we would not kiss. The words “When can I see you again?” were coming out of his mouth even as I was telling myself, “You will never see him again.”

But we had clicked. He knew the names all the bones in the foot. I had a foot, and I wanted to know the names of its bones. I was getting what I had always been told to go after but had never been confident that I deserved.

“You’ve really impressed me with your intellect,” The Doctor murmured, kissing me goodbye that first night. Since I am often impressed by my own intellect, I didn’t reflect on this feedback.

“Any chance you give lobotomies?” I texted him, after struggling all day with an essay draft. “Asking for myself.”

“No one gives lobotomies,” he said. And that was the end of the conversation.

I watched when The Doctor shared his expertise with sick friends and injured strangers. The feeling this inspired in me was similar to the sublime ecstasy described by people who claim to have encountered angels. I was delighted by his abundance of lifesaving knowledge, how he could always spare it, like it was nothing. He was delighted by my delight.

As I listened to my racing heartbeat (my Tachycardic heartbeat,) I hummed:

The doctor’s eyes are blue

Or you’re a bad Jew

The Doctor read some of my writing. “It’s really good,” he said. “It’s even better than my writing.”

I bet your testicular exams are even better than my testicular exams, I thought. But I was touched that he’d taken time out of his busy day of appointments. I was glad he noticed me.

And he did notice me. I wasn’t using the most effective allergy medication, he said. Yes, you should get the flu shot, he affirmed. It’s good this year. No, don’t believe that thing guys in high school told you, no studies confirm that. I asked for more and more. Free information! Round-the-clock access to lifesaving skills! An answer to every ailment, a science tailored to my needs, an encyclopedia of goodness inside one person’s mind.

I also, sometimes, feared his knowledge. It was eerie that The Doctor knew more about my body from studying it than I did from living inside it. He, not I, was the expert on my cervix, though he would never say that. He knew more than I did about my birth control method, and my eyeglass prescription, and my headaches. Could he spot what was wrong or rotten in me just by looking? Did he keep secrets from me about myself?

“You should get that mole checked,” he said one night.

“You should get it checked again.”

Some people have to put down a copay for that kind of advice.

I had a body. He knew the names of all the parts and why they worked. I had only words and opinions. He had facts and methods and solutions. I had fears. He had answers. A perfect match, I thought. Wrong! With the unceremoniousness with which a nurse whips off a blood pressure cuff, The Doctor ended our relationship.

I had let everyone down.

After all, for what did my family come to America, labor in poor conditions, get shot up in World War II, and empty their savings to glut themselves on private education, if not for me to marry a Jewish doctor?

Now how will I get my children vaccines once the rationing starts?

Jews love our reputation as doctors and lawyers. Sure, we like our Natalie Portmans, our Bernie Sanders, our Zuckerbergs and our Adelsons. And sure, just as often we more quietly produce teachers and plumbers and social workers. But we always return to doctors and lawyers. They help us feel strong and secure and successful in a world that wants Jews to feel none of those things. They help us feel like we might survive whatever is coming next. They help diagnose our yeast infections via text message.

I imagine the future, and the water has all run out. Or, this time the Jews are being rounded onto high-speed bullet trains. Or gun violence has become so prevalent that no one can leave the house. I know what The Doctor is doing in this future. But what am I doing? What is worthy, other than making life or saving it?

No matter what may have been lost in our time together, I know it wasn’t a waste: The Doctor explained to me, in stark medical terms, that if I don’t stop eating nine to 13 gummy vitamins like candy every day, I will be hospitalized and will risk losing my eyesight.

And the next time I want to see a doctor, I’ll make an appointment.

Jenny Singer is the Forward’s deputy life/features editor. Contact her at singer@forward.com

A Jewish Girl’s Guide To Getting Dumped By A Doctor