Of Course We Must ‘Write Our History’ — But Do We Need To Restage It? 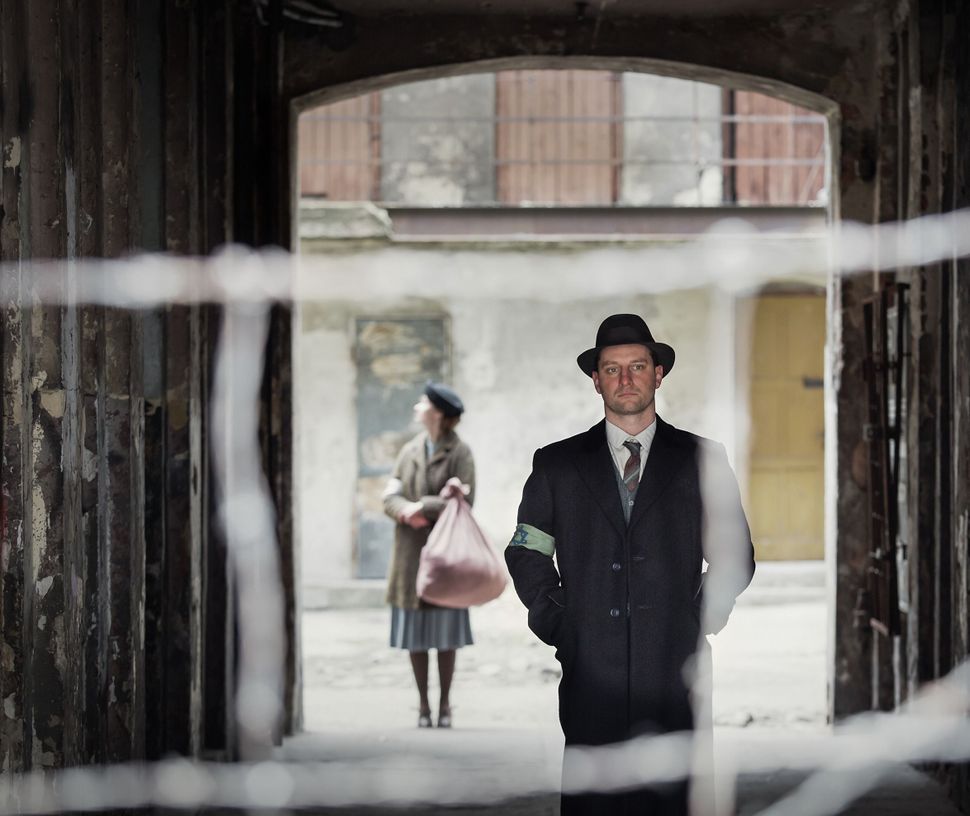 After the establishment of the Warsaw Ghetto in 1940, Nazi cameramen recorded countless rolls of film. Much of the material captured was repurposed for propaganda films that portrayed Europe’s Jewry as unhygienic, uncivilized and animalistic. While this documentary footage often relied on subjects that were not directed, the narrative and the conditions surrounding them were contrived and controlled. The Germans crammed the city’s Jews into close quarters, filled their already cramped squares with refugees and reduced them to indigence.

But a group of about 60 Jewish Poles, with no equipment save their eyes, ears and pens documented a counter narrative, working tirelessly and secretly to tell the true story from a Jewish point of view.

This group, the “Oyneg Shabes,” is now the subject of not just a film, but a theatrical event. “Who Will Write Our History,” directed, written and produced by Roberta Grossman, executive produced by Nancy Spielberg and adapted from Samuel D. Kassow’s book of the same name, is out in select cinemas now with a global event screening scheduled for Holocaust Memorial Day January 27. It will be shown simultaneously at Auschwitz and Holocaust museums and streamed on Facebook Live with the imprimatur of UNESCO and the World Jewish Congress. The project’s ambitions are grand and, by rights, should be.

Led by historian Emanuel Ringelblum the Oyneg Shabes was a clandestine branch of the Jewish Self-Help, a charitable organization formed after the Nazi invasion of Poland. The band of journalists, artists and scholars collected, recorded and ultimately buried some 60,000 pages of witness testimony, drawings, pamphlets and ephemera of ghetto life. This archive of primary source material, discovered in caches over the years, constitutes the bulk of the film’s narration.

No expense was spared. Academy Award Winner Adrien Brody and three-time Oscar nominee Joan Allen narrate as Ringelblum and the journalist Rachel Auerbach respectively, from their own firsthand accounts. But Brody and Allen aren’t the only actors to fill the roles. In the thick of black-and-white footage and talking head context, Grossman interjects a costume period drama.

Polish actor Piotr Glowacki plays Ringelblum in Yiddish and Polish. Jowita Budnik plays Auerbach. Their scenes are brought up to date with glossy, muted color production value. In a director’s statement Grossman wrote her team worked alongside scholars for six months to ensure everything that appeared on screen in these sequences was true to the era. But juxtaposed with real footage of a poor, sunken-cheeked child fidgeting with his coat; the streets choked with people; the carts of the dead, these scenes with their stilted dialogue and set-designed recreations scan as bogus. (The choppy composite green-screening of actors over archival film and the characters’ tendency to poetically fade into frame from the ether don’t help.)

There’s a certain way actors behave in a documentary recreation. In a bad one, they move around a space with heavy purpose, like they’re yoked to the profundity of their subjects or to a period in time. It’s as if they forget, in the immensity of their task, their most essential function: To appear human. And to be human, even in the midst of a knowing episode in history, is to never be fully aware of one’s place in it. Even the members of Oyneg Shabes, palpably aware they were witnessing an epochal tragedy, surely didn’t live their every waking moment as such.

And so we have Ringelblum’s worried wife (Karolina Gruszka) linger for a loaded second in a doorway, watching her husband work, before turning away to the hall. We have passersby stopping to listen to a musician’s perfunctory plangent violin. We have people peering out their windows to witness some show of violence one would expect them to be inured to. We have, in one instance, a powerful monologue about hunger — something we’ve seen already in the form of real, emaciated bodies – recited in voiceover as a well-fed Polish actor trips over a body in the street. While the words retain their impact, these dramatizations can’t match them.

In an attempt to bring us closer to the past, Grossman draws us further away. It’s true that the narrative the Oyneg Shabes hoped to preserve was not a cinematic one. The group didn’t have a documentary film crew and operated in secret, but in trying to render their operation in the cinematic language of today something essential is lost.

There’s a version of this film that could capably tell Ringelblum, Auerbach and their group’s history through narration and photographs. The filmed footage would, necessarily, be taken mostly from a German perspective, but the words – the elements most essential to the Oyneg Shabes’ mission – would provide the fuller story.

Of Course We Must ‘Write Our History’ — But Do We Need To Restage It?