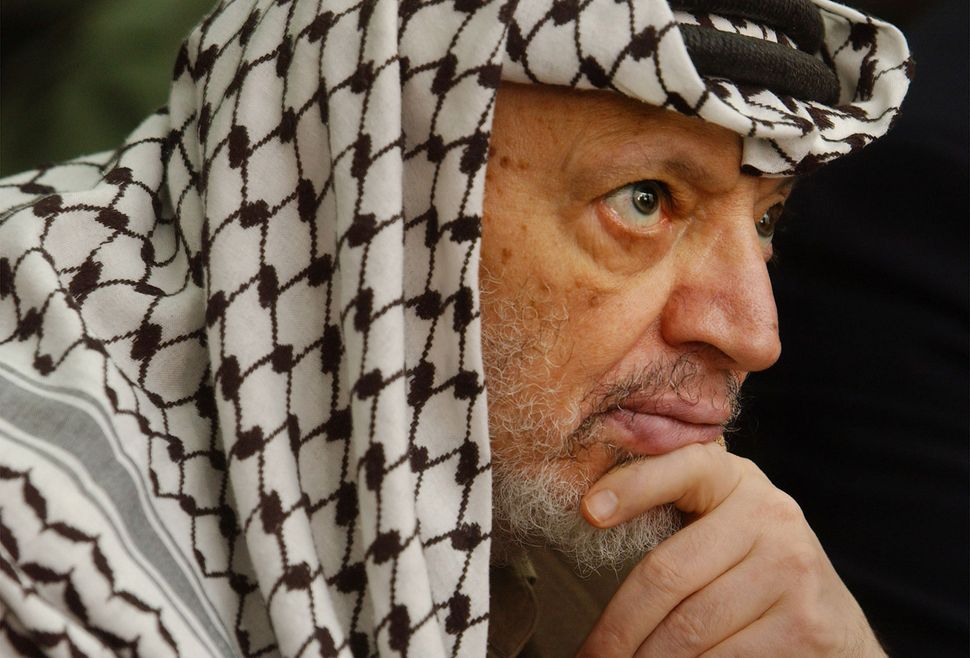 For a Jew, visiting the Yasser Arafat Museum in Ramallah is an unsettling experience.

Arafat, who would have turned 90 this year, is the closest thing Palestinians have to a Founding Father — their George Washington or David Ben-Gurion — except that his dream of an independent Palestine still is not realized 14 years after his death, and many believe that his violent form of leadership hindered the cause instead of helping it.

This museum, which opened in 2016 and retains the shine and hush of a brand-new building, is the closest thing Palestinians have to an actual tourist attraction in the West Bank territories now occupied by Israel, a gleaming contrast to Ramallah’s haphazardly maintained buildings and scruffy streets.

I imagine that, for Palestinians, the museum stands as a monument to a heroic past and a taste of what a future Palestine could offer. Adjacent is the Palestinian president’s headquarters. At the entrance is Arafat’s tomb, a solemn landmark guarded by two stiff uniformed men.

“The idea is to have a cultural, educational, as well as commemorative institution,” Nasser al-Kidwa, chairman of the Yasser Arafat Foundation, which pioneered the $7 million project with funds allocated by successive Palestinian Authority governments, told The New York Times at the opening.

But for this Jew, the museum presents a steady narrative that is both seductive and troubling. Some of its omissions and assertions are ridiculous, true, but the overall tone is not as bombastic and offensive as I thought it would be. Instead, the visitor is exposed to a storyline that quietly defies the Zionist narrative with which I was raised, and cleverly frames Arafat as a simple, courageous prophet leading his people in the Promised Land. 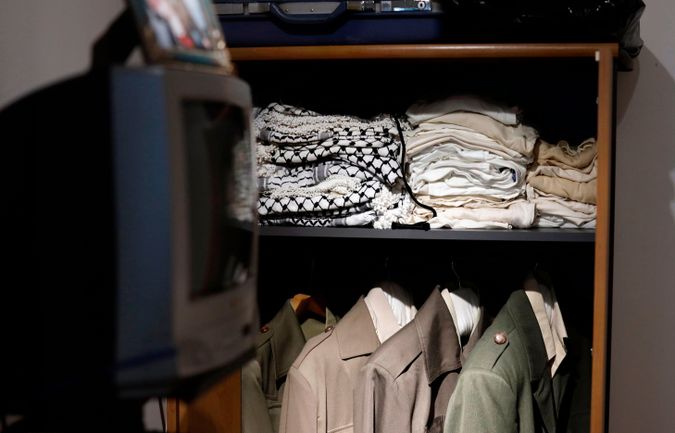 An Austere Existence: The museum replicates the quarters where Arafat lived from 2001-2004. Image by Getty Images

From birth to death, Arafat’s life is not so much sugarcoated as subtly reconstructed.

The museum asserts that the Palestinian leader was born in his grandfather’s house in the Old City of Jerusalem, overlooking the al-Aqsa Mosque, on August 24, 1929, situating his birth at the contested heartbeat of the conflict. But Israelis and many historians say he was born in Egypt and that he arrived in Jerusalem only after the death of his mother, when he was 4 years old.

Similar controversy surrounds his death. The museum asserts that Israel tried to assassinate him numerous times, and finally succeeded near Paris in November 2004 by poisoning him, based on evidence from medical reports “as well as official statements by Israeli officials.” Israel, however, has denied involvement in his death, and French authorities have reaffirmed that he was not poisoned.

But clearly these claims serve a purpose, as do the origin mythologies of any national leader.

That mythology is dramatically advanced at the end of the historical exhibit, when visitors are led through an enclosed footbridge to the cramped, austere quarters where Arafat lived from 2001 to 2004, while he was under siege and surrounded by Israeli tanks and rubble. 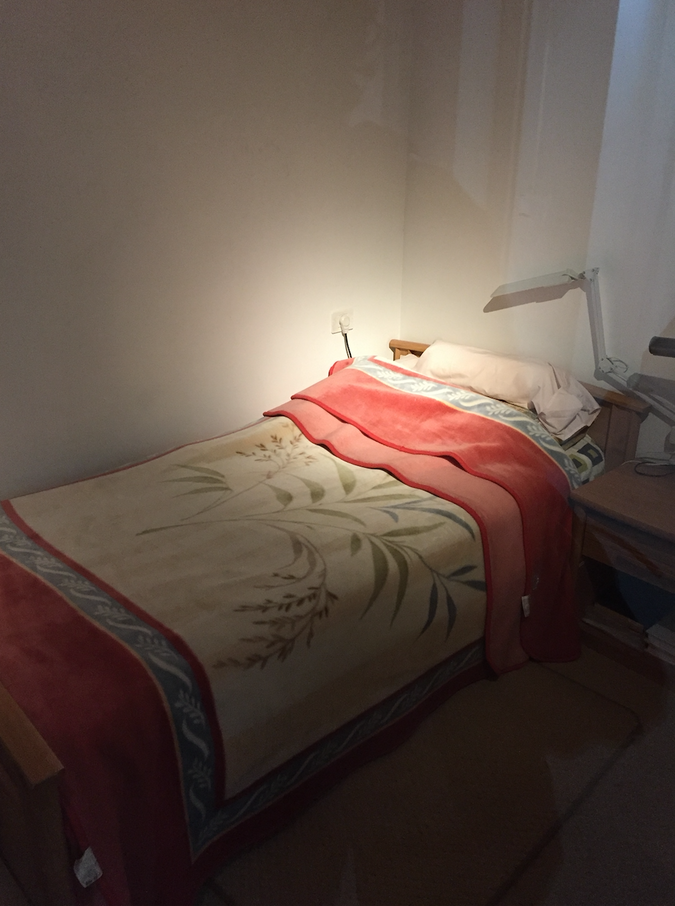 A single, metal-frame bed is tucked into a corner, a bedside lamp shining halolike on a plain, nondescript covering. Opposite, four of Arafat’s trademark khaki military uniforms are displayed hanging in an open closet. A Muslim prayer rug is folded on a wooden chair. There is a pile of keffiyehs, his signature Arab headdress.

The mood is solemn, the message obvious: Forget the allegations of massive corruption and patronage that swirled around Arafat’s rule and, arguably, deprived his people of what they deserved. Here is a revolutionary hero, living a Spartan existence. His wife, Suha Arafat, is not even mentioned; the only nod to his personal life are several photographs of Yasser Arafat with the couple’s young daughter.

This repositioning is no more egregious than the lengths to which we Americans have gone to erase the distasteful aspects of our own Founding Fathers’ lives. What I found more troubling was how, in Arabic and English, the museum presents the narrative of Arafat’s life, juxtaposed with the Palestine Liberation Organization’s chronology, in such calm detail that you could easily miss the omissions and storytelling twists.

The waves of Jewish immigration to British Mandate Palestine are seen as evidence of the growing power of “Zionist colonization” — particularly because when partition is proposed in 1947, there are twice as many Palestinians living there than Jews, and Jews get the majority of the land. But somehow, the Arab refusal to acknowledge Israel’s existence and to accept the proposed sharing of the land is missing.

Massacres of Arab villages are sympathetically portrayed, as they should be. They were horrific and inexcusable. But Arab violence against Jews is underplayed.

The museum adopts a sort of passive rhetorical distance when describing certain events, as if Arafat and his supporters were somehow absent. The 1967 war, prompted by multiple Arab invasions of Israel, is described thusly: “The Arab-Israel War erupts and Israel occupies the remainder of mandated Palestine.”

When Palestinians commit acts of terror, Arafat seems to bear no responsibility, and somehow the rescuers or victims are held to account.

So, in September 1972, “during the Summer Olympics in Munich, members of the Israeli Olympic team are taken hostage by members of the Black September Organization. German and Israeli security forces attempt a rescue, resulting in the deaths of all the hijackers and nine Israeli athletes. In retaliation, Israel bombs Lebanon, killing 400 civilians.”

Or, in March 1978, a Fatah naval unit “storms the coast of Tel Aviv killing and wounding many Israelis. [Most] members of the unit are killed fighting the Israeli Army. Israel retaliates by sending 3,000 soldiers into Lebanon, occupying the south of the country and causing many casualties.”

There are 27 photos of Palestinian leaders allegedly assassinated in world capitals by Israeli security services. But there’s no personal reference to the individuals murdered by Palestinian terror directed or abetted by Arafat.

By the beginning of the 1990s, Arafat shifted his tactics toward negotiations and eventually embraced his onetime enemy with that famous, if reluctant, handshake with Yitzhak Rabin on the White House lawn, after signing the Oslo Accords in 1993. Two years later, Rabin was assassinated by an Israeli right-wing extremist, and the hard-fought dream of peacefully ending the conflict began to unravel.

With the ensuing Palestinian intifadas and acts of terror, the construction of Israeli barriers and checkpoints and the continued occupation, Israelis and Palestinians know even less about each other than before. Israeli citizens (with the exception of the military) are not allowed in Ramallah, so the Arafat museum’s version of their communal history — as flawed as it is — is not accessible, even to be hotly debated. 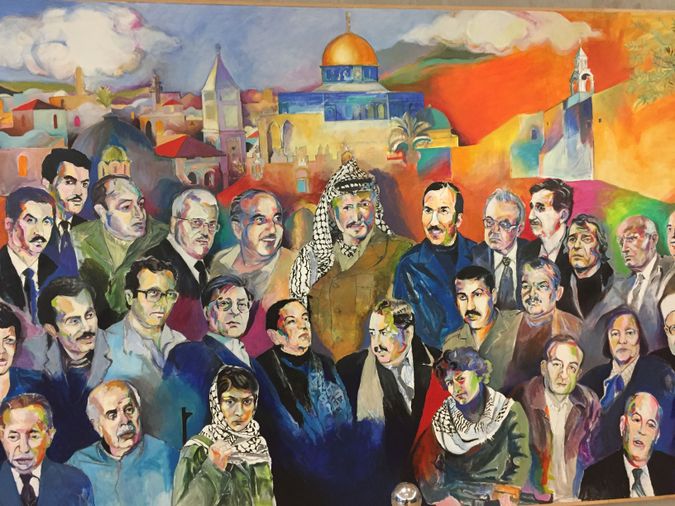 Hagiographic Depiction: A mural at the Arafat Museum depicts Yasser Arafat among a pantheon of leaders. Image by Jane Eisner

Perhaps, then, more American Jews should visit. It’s certainly affordable: The entrance fee for a family is 2 dinars, the equivalent of less than $3. A visit will make you uncomfortable, defensive, maybe very angry. Or it could leave you impressed by the sophisticated presentation of a complicated story.

“Museums are not neutral!” proclaims a campaign to encourage museums to be more socially aware and inclusive. The same critique could apply to museums that offer hagiographical portrayals of national leaders and liberation struggles. That lack of neutrality may be infuriating, but it is also immensely educational and revealing.

I didn’t leave Ramallah that day any more admiring of Yasser Arafat as when I arrived. I wished the museum grappled with the complexity of the Palestinian story more honestly, to puncture the fiction that Arafat’s devotion to violence led to anything constructive and to face the fact that his autocratic rule of terror brought his people no closer to statehood.

But it also made me question whether the same intellectual honesty ought to be applied to the way we tell our own stories.

Jane Eisner is writer-at-large at the Forward where she led the newsroom for more than ten years as editor-in-chief. She is the Koeppel Fellow in Journalism at Wesleyan University. Contact her at [email protected]