The Secret Jewish History Of Hawaii 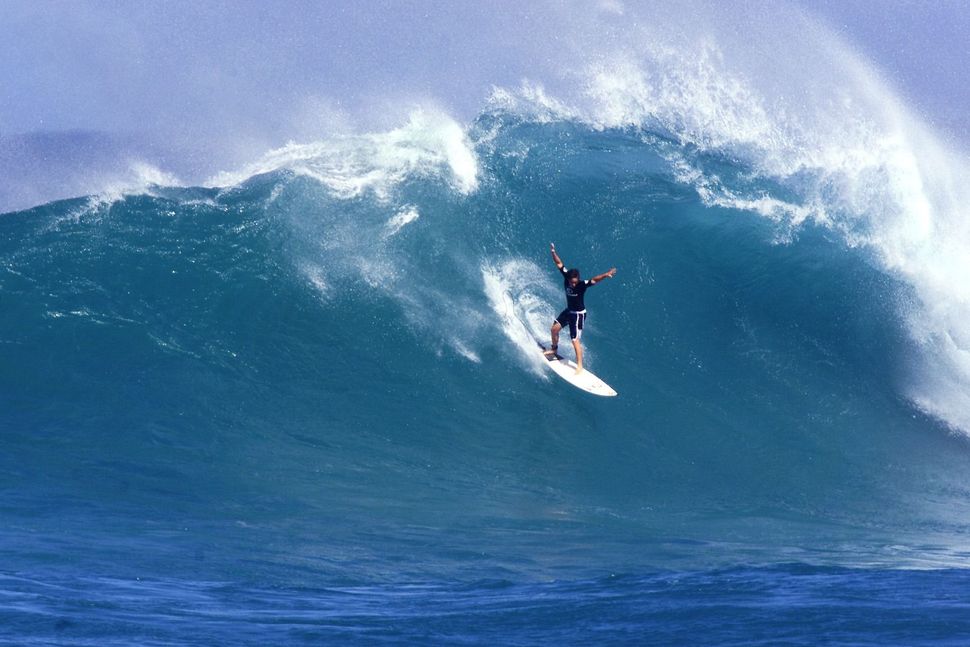 Riding a Jewish Wave: Makua Rothman drops into a 4-meter wave at the Rip Curl Cup at Sunset Beach on the North Shore of Oahu in 2000. Image by Getty Images

There once was a land ruled by a King David. And unto the king from beyond the land came a wise man who was learned in the traditions of an ancient, foreign people; skilled at fortune-telling, and able to read the stars. The king took a liking to the man and spent many hours alone with him, learning the secret language of the scholar, listening to him chant his Holy Scriptures, and just generally enjoying male bonding with him over copious amounts of intoxicating beverages.

The resh, or holy scholar, flattered the king, and the king repaid the resh with a high position in the king’s court, with a royal residence and with the spiritual ceremonial title of Big Kahuna, which the resh recognized as close kin to his own people’s ceremonial high priests, the kohanim.

But opposition to the king’s autocratic ways grew, and along with it envy and jealousy over the king’s newly adopted foreign prince. The king’s enemies objected to their ruler’s imperial manner and took to mocking his counselor, calling him “Holy Moses” but not in a good way. Like Daniel in the lion’s den, the resh read the writing on the wall, and he warned the king about his imminent downfall before fleeing to the land from whence he came; there he passed away within a month. True to the predictions of the resh, in short order the king was stripped of his powers and left a mere ceremonial figurehead. The king died within four years; his sister ascended to the throne as its final possessor, but within two short years, and with the backing of a great and powerful empire to the northeast, the monarchy was overthrown.

Yet for one brief, shining moment – perhaps only a matter of months, a half-year at the most — the most influential man in all of Hawaii was Elias Abraham Rosenberg, who arrived in Honolulu from San Francisco in 1886, bringing with him a Torah scroll and a yad, or pointer, and swiftly ingratiating himself with King David Kalākaua. Rosenberg’s origins are a matter of some debate; some say he was born in Russia and that he apparently lived in England and Australia. Others say he originally fled San Francisco for Hawaii after selling one too many counterfeit lottery tickets.

Sixty years ago, in March 1959, Congress passed the Hawaii Admission Act, which U.S. President Eisenhower signed into law; this paved the way for statehood status for the Polynesian archipelago, which became official in August of that year.

While Rosenberg may have been one of the most colorful Jews in Hawaii’s history, he was certainly not the first prominent member of the tribe to make a mark on the region, nor was he the last. His service to King David was predated by that of Paul Neumann, who, like Rosenberg, was an émigré from San Francisco. Neumann, as the first Jew in Kalakaua’s court, may have paved the way for Rosenberg. He and the king were known to enjoy many a good game of poker, and the king hired him to be his personal attorney. While the overthrow of the monarchy brought an end to the position of court Jew, in more recent times, and despite the fact that their population on the archipelago tops out at a mere 10,000, Hawaiian Jews have enjoyed success in the uppermost reaches of state government via the democratic ballot box: Linda Lingle became Hawaii’s first Jewish (and first female) governor when she was elected to her first of two terms in 2002, and Hawaii’s Jewish current senior U.S. senator, Brian Schatz, moved with his family to Hawaii from Michigan when he was 2 years old.

The first mention of Jews in Hawaii appeared in 1798, when a sailor on the whaling ship Neptune recorded in his ship’s log that the Hawaiian king had come aboard with a “Jew cook.” Whether the menu included matzo balls and gefilte fish is not known. Jews first began arriving in Hawaii from the United States in the mid-19th century, when a steady flow of San Francisco-based Jewish merchants saw opportunities for trade between the islands and California, especially in sugar and coffee. As was the case historically, Jews also came to Hawaii and, catering to the influx of white North Americans to the island, set up shop selling dry goods in general stores.

The Jewish population of Hawaii ebbed and flowed over the years. In the early years of the 20th century it swelled to several hundred, most of whom arrived from the United States as part of the growing military contingent on the island. The Jewish population declined when military forces were moved closer to Europe with the advent of World War I. The growth of the University of Hawaii, founded around that same time, also accounted for a rise of American Jewish immigration; it also helped the population reach enough critical mass to establish a few small communal organizations and a Jewish cemetery.

Hawaiian Jews have risen to positions of prominence in other fields besides business and politics. Although born in Brooklyn, contemporary novelist Allegra Goodman was raised in Hawaii, where her parents taught at the University of Hawaii. Goodman’s Hawaiian Jewish upbringing is often reflected in her writing. Her parents figured prominently in religious life on the island, where they were instrumental in forming the first Conservative Jewish congregation.

Oahu-born Makua Kai Rothman, widely regarded as the world’s greatest Jewish surfer, was crowned Big Wave World Champion in the World Surf League in 2015. Rothman credits his Jewish father, Eddie Rothman, for instilling in him the can-do spirit needed for surfing big monster waves. Hawaii is also home to Alvin Wong, a Jewish convert whom The New York Times dubbed in 2011 “the happiest man in America.”

But there is probably no better-known Hawaiian of Jewish descent in history than global pop star Bruno Mars. The Honolulu native’s father, Peter Hernandez, was born in Brooklyn to a Puerto Rican father and to a Jewish mother whose family hailed from Ukraine and Hungary. Mars’s second album was called “Unorthodox Jukebox,” and it contained the song “Locked Out of Heaven,” co-written, like many of his songs, by Ari Levine.

Still, it was Rosenberg’s legacy that was most strongly felt in the Jewish community up until the time that the first synagogue was established on the archipelago. The yad and Torah scroll that Rosenberg left behind when he fled Hawaii in 1887 had fallen into the possession of the royal family, whose heirs loaned it to the local Jewish community for High Holy Day services and such in the early 20th century. The yad was given to the Reform synagogue Emanu-el upon the synagogue’s dedication in 1960, and the scroll was handed over to the Jewish congregation in 1972.

The Secret Jewish History Of Hawaii