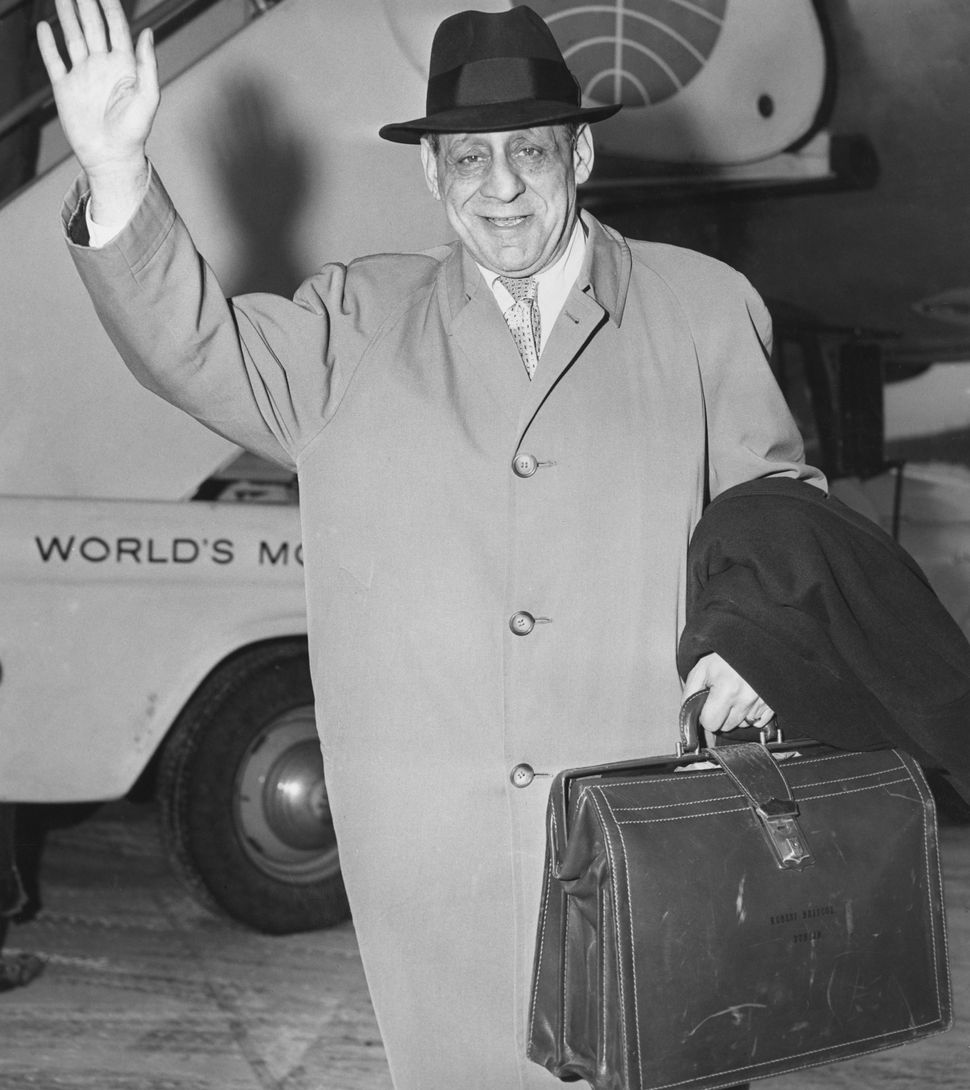 On March 16, 1957, in celebration of St. Patrick’s Day, parade bands on Manhattan’s Fifth Avenue blared classic Irish tunes, while marchers carried American and Irish flags. The scene was, according to The New York Times, a “musical river of green filled with thousands of merry lads and lasses.” Fueling the excitement, the lord mayor of Dublin, Robert Briscoe, had just arrived from Ireland, reportedly on a plane piloted by his own son.

Briscoe was the ultimate Irishman, an Irish Republican Army gunrunner turned popular legislator with a hearty sense of humor. But the lord mayor was also Jewish. And in the United States he would be spending time among both the Irish and Jewish diasporas, promoting tourism to Ireland while fundraising for the United Jewish Appeal. “It will take a bit of doing to satisfy both groups,” the New York Herald Tribune remarked.

The concept of an Irish Jew was captivating. Throughout the celebrations, Briscoe stood alongside then-New York City mayor Robert Wagner and joked about how his dual identity might make him a formidable New York mayoral candidate. The city’s rabbis debated whether parade marching was shomer Shabbos.

Briscoe’s parents, like the ancestors of many of Ireland’s 5,000 Jews, had emigrated from Lithuania in the second half of the 19th century. As a young man, Briscoe worked alongside the nationalist group Sinn Féin and the early IRA. Those politics brought Briscoe to New York for the first time in 1922. Then, at the height of the Irish Civil War, he helped orchestrate an occupation of New York City’s Irish Consulate, in an unsuccessful protest against the treaty that served to keep Ireland within the British Empire until 1949.

He eventually returned to Ireland, and in 1927 he joined the country’s legislature as a representative from Dublin. While in office, Briscoe became more active in Zionist organizing and fundraising. During World War II he publicly campaigned for the formation of a Jewish army to fight Hitler.

But on the global stage, Briscoe went mostly unnoticed until June 1956, when foreign newspapers declared the surprising news that the overwhelmingly Catholic country of Ireland had just produced a Jewish lord mayor of Dublin. He would be the first Jew to fill the position (technically, the Irish Jew Lewis Wormser Harris was the first elected, in 1876, but he died before beginning his duties). People in America took notice of Briscoe’s new office (Yogi Berra opined “Only in America!”). In July, Michael Mann, head of the Irish Jewish Club of the Midwest, arrived in Dublin to personally deliver Briscoe’s invitation to head the New York St. Patrick’s Day parade.

Americans loved him. He was a guest on the TV game show “What’s My Line?” In June 1957, CBS aired a biopic starring Art Carney as Briscoe. In Cincinnati, Briscoe raised $25,000 and Mayor Charles Taft, proclaimed a “Robert Briscoe Day.”

“[Briscoe] was all the things Irishmen are famous for: He was jovial, fun, enjoyed a drink and being with people. These were not things Jews were famous for,” said the University of Florida professor Rachel Gordan, who studies American Jews in the post-World War II period. “He was a real Irish patriot, and he was an Orthodox Jew. That was such an usual combination, and it sort of reminded Americans that they’re not the only ones who do this religious tolerance thing.”

During his tour, Briscoe was frequently asked about anti-Semitism. He often cited his own election as evidence of Ireland’s tolerance. His cheery presentation at times ignored the fact that some Irish politicians and conservative Catholic leaders had evoked anti-Semitic views. And, despite advocacy from Ireland’s Jewish leadership — including Briscoe himself — the country accepted relatively few Jewish refugees fleeing the Nazis.

In Ireland, Briscoe’s tour was deemed a success. He reportedly raised tens of millions of dollars. In June 1957, New York’s Irish tourist office reported that travel requests had jumped 20% since the previous month. The chief rabbi of Ireland, Immanuel Jakobovits, was also inspired to tour North America.

Briscoe was not re-elected to his post the following year, though he returned to the position in 1961. He also remained in the legislature and continued to visit the U.S. throughout his life. In March 1962, the Jewish lord mayor’s American tours brought him to the White House to meet America’s first Catholic president.

“Everybody in Ireland, I think, has invited your president to come visit not Dublin, but the whole of Ireland,” he told reporters that day. “We’d be very happy to be able to cheer your president in our country, the country of his descent.”

Rebecca Heilweil has written for Wired and the Philadelphia Inquirer.