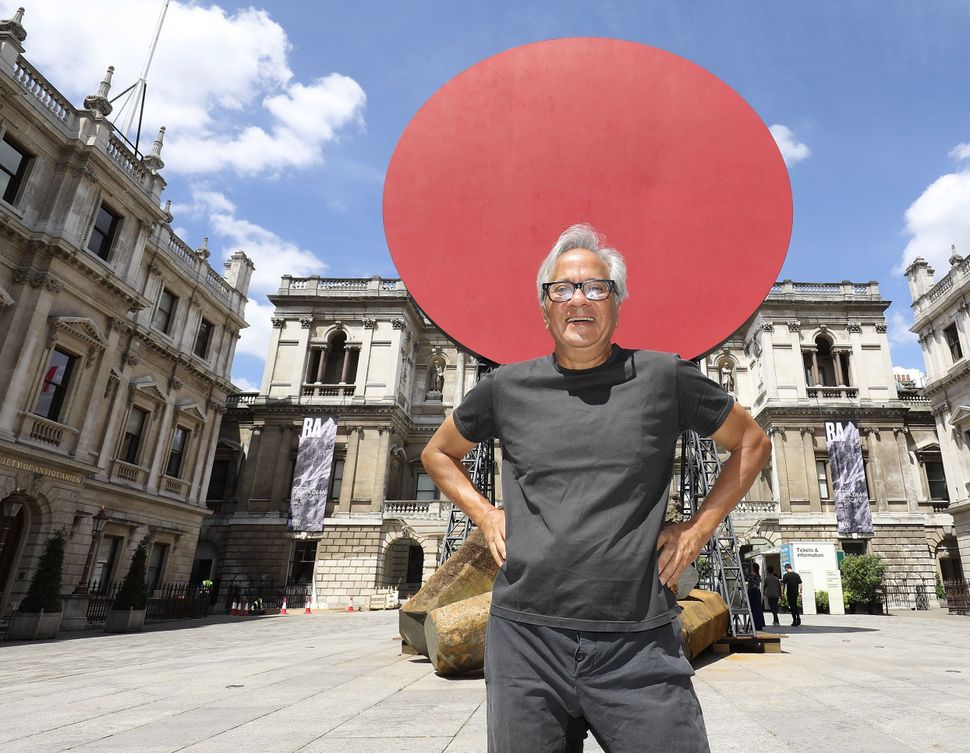 Anish Kapoor is used to having ugliness added to his work.

In 2018, Kapoor, the artist responsible for “Sky Mirror” and “Ark Nova,” sued the National Rifle Association for using his sculpture “Cloud Gate” in an advertisement accused of stoking fear and division. But while he succeeded in getting the NRA to remove the unauthorized image, Kapoor’s been known to leave other manipulations of his work intact.

After he installed his sculpture “Dirty Corner,” which he nicknamed “the vagina of the queen,” at Versailles in 2015 the artwork, a huge steel funnel, was defaced with anti-Semitic graffiti, including phrases like “the second RAPE of the nation by DEVIANT JEWISH activism.” Kapoor, who is Jewish, elected to preserve the graffiti as a form of commentary. In an irony more mammoth than the sculpture in question, he was sued for this decision as the result of a complaint by Versailles municipal councilor Fabien Bouglé, who claimed that Kapoor was inciting racial hatred. (The court ordered that the graffiti be covered, and Kapoor complied by masking it with gold leaf.)

Now, Kapoor says, he sees fissures of division and hate in his homeland of England. In a new profile in The Guardian, the 65-year-old Mumbai-born sculptor recounted his own experiences with prejudice in London following the Brexit vote.

“Since then permission has been given for difference, rather than being celebrated, to be undermined,” Kapoor told The Guardian. But while Kapoor is concerned with the direction of the country, he’s not willing to buy into charges of anti-Semitism aimed at Labour leader Jeremy Corbyn.

“I’m Jewish and I believe he has done his best on this,” Kapoor said of Corbyn. “He’s an anti-Zionist. And you can be anti-Zionist and pro-Palestinian without being antisemitic [sic].”

Kapoor also expressed empathy for others like him, whose British status is challenged due to racial or ethnic difference — even those whose disaffection takes extreme forms. In a controversial show of solidarity, he told The Guardian he has decided to advocate for Shamima Begum, a British citizen who joined ISIS in Syria as a teen, lost three children in the war there, and has been attempting to return to her native UK with her infant son since February of this year. Her planned return remains at a stalemate and has sparked fierce public debate about whether there is a racial dimension to calls to revoke her citizenship. Kapoor understands how a young person in her position might become radicalized.

“There’s this real sense for me of who’s next?” Kapoor told The Guardian. “There’s an atmosphere of vilifying Muslims for having extreme views. If I was a young Muslim, would I feel angry enough to have joined ISIS? I would at least think about it.”