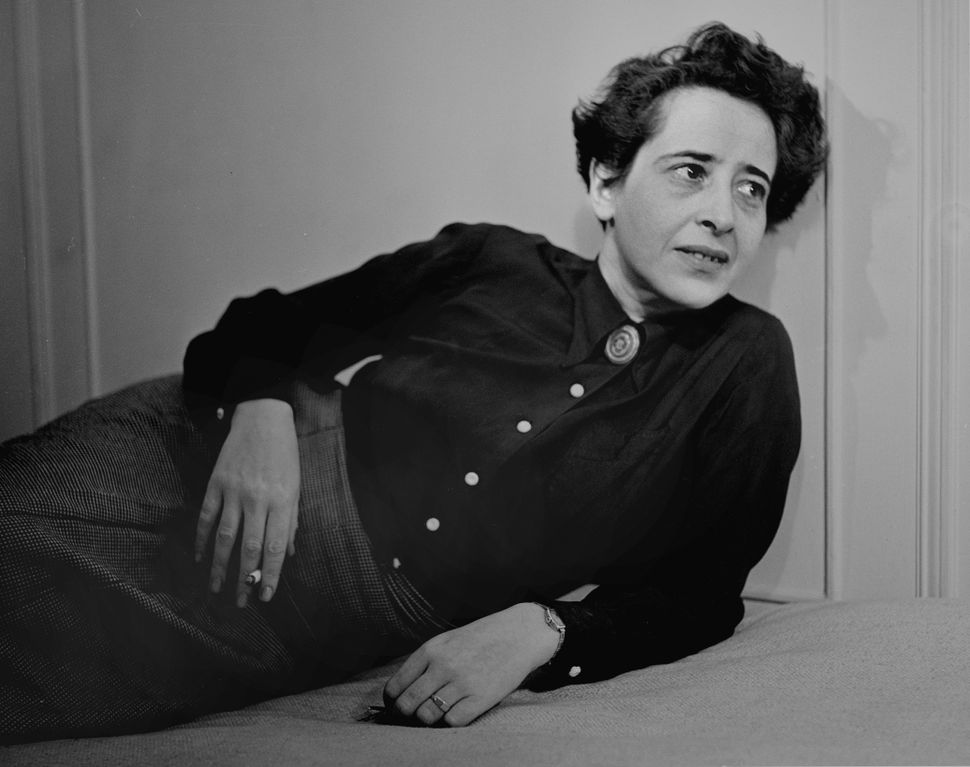 Hannah Arendt, one of the philosophers studied in Susie Linfield’s “The Lions’ Den.” Image by Getty Images

The Lions’ Den: Zionism and the Left From Hannah Arendt to Noam Chomsky
By Susie Linfield
Yale University Press, 400 pages, $32.50

In 1981, in an essay titled “Revolutionary Realism and the Struggle for Palestine,” Fred Halliday, a member of the editorial board of the New Left Review, broke with his comrades. A scholar of the Arab and Muslim worlds, Halliday made clear that he continued to support a Palestinian state and the refugees’ right to return. He remained convinced that Israeli policies toward Palestinians were “stubborn, short-sighted, arrogant, messianic,” racist and, ultimately, suicidal.

That said, in “Revolutionary Realism” and subsequent essays, Halliday castigated the positions of the left on Israeli sovereignty, partition and binationalism; he blasted “the blind endorsement” of armed groups and terrorists and the “widespread disparagement” of the human rights of others. Observing that realism was “manifestly absent” from the left’s discussions of Israel, Halliday called for a “mature internationalism.”

“Metaphorically speaking,” Susie Linfield writes, Halliday “was walking into the lions’ den.” In her informative, provocative and compelling new book, Linfield, a professor of journalism at New York University, explains the evolution of Jewish left-wing intellectuals in the United States and Western Europe from “firm though never unanimous support” for Israel to “angry repudiation.” She acknowledges that Israel’s occupation of territory acquired in the 1967 and 1973 wars was a major factor. Even more important, she indicates, was the left’s identification of colonized people in the Third World as “the main agents of social justice” — and of Zionists as their imperialist oppressors. Echoing Halliday, Linfield (who describes herself as a “left-wing Zionist,” appalled by Israel’s “horrific human rights abuses”) claims that the left “has been the worst enabler of Palestinian delusions — and offered a poisonous array of its own.”

“The Lions’ Den” contains chapters on eight influential thinkers. Linfield begins with Hannah Arendt. In the 1940s, she reveals, Arendt, once a proponent of Jewish nationalism and a supporter of kibbutzim and The Hebrew University of Jerusalem, became a vitriolic opponent of partition and Jewish sovereignty. Arendt’s judgments during this crucial period “proved deeply, radically, perplexingly wrong.” “Shockingly heedless” of political realities, and convinced that a downward trajectory from sovereignty to nationalism to fascism was inevitable, Arendt “imposed her tropes — her fixations” — on Zionism. She supported any entity except a Jewish state or separate Arab and Jewish states, including a Jewish-Arab federation within a British commonwealth or a United Nations protectorate. She never explained how such entities would formulate a foreign policy, establish educational, legal and political institutions, or how Great Britain or the United Nations would keep the peace between Arabs and Jews. The woman who had denounced Jewish passivity and asserted that the Jews’ aversion to military organization had been catastrophic, Linfield writes, now opposed Jewish national self-determination, equating it with suicide.

Arendt stopped writing about Zionism after 1950, but, Linfield notes, she renewed her confrontation with Jewish politics in “Eichmann in Jerusalem” (1963), an episodically brilliant book that was also suffused with contempt for Israel and Israelis. Throughout her career, Linfield concludes, Arendt offered little guidance on solving the conflict between Israelis and Palestinians. Arendt’s criticism of others, she adds, might be an appropriate assessment of her: “People ignore reality in favor of their bright ideas.”

Linfield’s critique of Noam Chomsky is equally unrelenting. With Chomsky, she asserts, “the flight from reality reaches its apotheosis.” Linfield shows that there is no factual basis for Chomsky’s claim that the Palestine Liberation Organization, Iraq, Syria, Libya, Iran and Hamas endorsed a 1976 U.N. resolution affirming Israel’s right to exist and endorsing a peaceful, political two-state solution, and they have not deviated from that position in the ensuing decades. His misrepresentations of this resolution “are staggering.” Chomsky’s claim that all American presidents, all Israeli leaders and all Zionist organizations are “rejectionists” is also baseless. And, Linfield indicates, Chomsky ignores or downplays Palestinian acts of terrorism.

“The Lions’ Den” provides readers reasons to conclude that Chomsky does not know what he is talking about. After insisting, for example, that Hamas attacks on civilians were a fantasy advanced by apologists for Israel, Chomsky defended Israel’s right to respond to criminal attacks, before declaring that it had no right “to use force to defend itself.” He then added an analogy: “Nazi Germany had no right to use force to defend itself against the terrorism of the partisans.” Chomsky used similar reasoning, which Linfield finds “difficult to even attempt to untangle,” in order to argue, “States do not have a right to exist.” He emphasized that this alleged right “is accorded to no other state in the international system,” Chomsky maintained that we should not expect Mexico to accept “the legitimacy” of U.S. possession of the land “acquired” as a result of the war of 1846. Once again, Linfield suggests, “we are slouching toward what Arthur Koestler called ‘cloud-cuckoo-land.’”

In chapters on Koestler, Isaac Deutscher, Maxime Rodinson, Albert Memmi, Halliday, and I.F. Stone, Linfield illuminates the ways in which Israel becomes “calamitously useful” for left-wing Jewish intellectuals. The Jewish state, she points out, enabled the left (with Memmi and Halliday expressing increasingly grave reservations) to “sustain a blistering critique of nationalism, albeit in the case of one small country [Israel], while simultaneously kowtowing to the anti-imperialist and stridently nationalist rhetoric of the Third World,” and hailing “horrifically repressive and racist regimes” (including North Vietnam, Mozambique, China and Algeria) as “harbingers of justice and freedom.” Moreover, this ideology helps explain the animus to Zionism expressed by Rodinson, whose parents perished in Auschwitz. “The notion of ‘a Jewish people’ has now become outdated,” Rodinson wrote. That “Judaism was on the road to liquidation” was a development he found entirely salutary.

Linfield doesn’t know whether Israel can or will fully restore its democracy. She is certain that getting there and moving toward a satisfactory solution to the Israeli-Palestinian conflict will require rejecting false certainties, fantasies, rewritten histories and dogmatism. A just peace will require all parties to live responsibly and ethically “inside history.” After all, Linfield concludes, “the opposite of realism isn’t principle; it is pathology. To reject realism makes you — and your children — into slaves of the past and strangers to the future.”