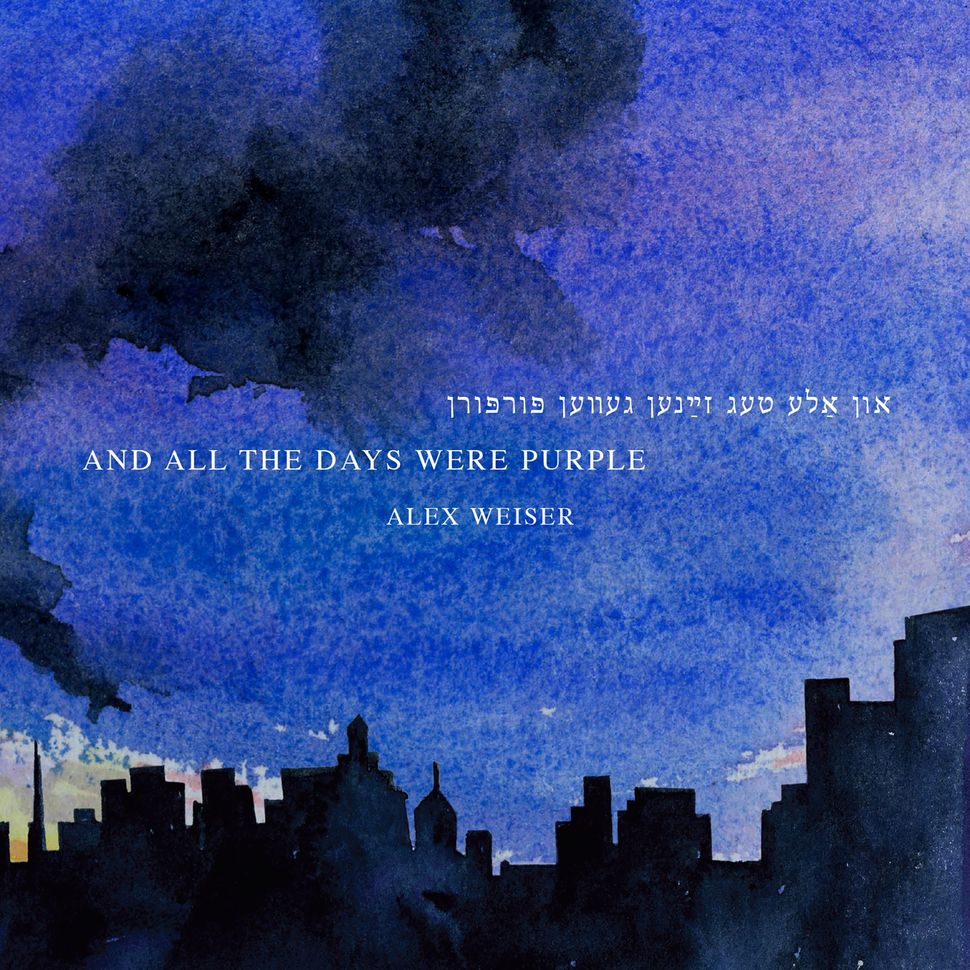 Composer Alex Weiser’s debut album “and all the days were purple” will be released by Cantaloupe Music on April 12th, with a release concert at the YIVO Institute for Jewish Research on April 9th. The music, which finds inspiration from secular Jewish poetry in Yiddish and English, chronicles a search for the divine while reflecting on life’s tumultuous journey of longing and its fleeting moments of joy. Weiser spoke to Annie Gosfield, composer of four albums on Tzadik records and the opera “War of the Worlds,” dubbed a “one woman Hadron collider” (BBC) and “master of musical feedback” (NY Times) and Eddy Portnoy, Senior Researcher and Director of Exhibitions at the YIVO Institute for Jewish Research and author of “Bad Rabbi And Other Strange but True Stories from the Yiddish Press.” Their conversation has been edited for length and clarity.

Eddy Portnoy: What I liked quite a lot about this, is the fact that you took this poetry which, outside of a relatively small number of university classrooms, largely flies under the radar. When it comes to Yiddish culture there’s really not a lot that a great number of people are familiar with. There are obvious stereotypes that people think of when they think of Yiddish, but high literature is not one of the things that average people consider, and so this is a nice opportunity not just to find some fascinating poems, but to put them into an entirely new setting. It really breathes new life into them in a way that wouldn’t have happened otherwise.

Alex Weiser: It was really interesting for me to discover that this poetry exists. In school I was exposed to the canon of ‘great American poetry’ – like Emily Dickinson, who is also on the album actually, Walt Whitman, Elizabeth Bishop, Robert Frost — and there was this sense that great American composers set great American poets. Discovering these Yiddish poets opened up the idea to me that Jewish literary culture was also a place I could turn to in my music.

EP: American poetry doesn’t have to be in English!

AW: Yes – the Anna Margolin poems were written in America, but actually the Sutzkever poem was written in Israel, and the Rokhl Korn in Canada.

EP: That’s right. One of the other interesting things is the choice of these particular Yiddish poems. If people go out on a limb and think about Yiddish poetry, one of their first stops is often Yiddish poetry connected to the labor movement: art with a social utility as opposed to the poetry you set which is just art. It’s not something that people consider much. It’s nice to see it placed front and center. One of the interesting things about this album is that it’s a creative use of Yiddish. You’re mining Yiddish to create new art, and it’s not something people do often.

AW: I think Yiddish culture is thought to be about certain stereotypical things, and art for art’s sake is not thought of as a Yiddish topic. You think of nostalgia, klezmer, a mother singing a folk song to her child, or a yeshiva, but you don’t necessarily think of it as a medium for reflecting on what poetry is.

Annie Gosfield: How did the fact that it was Yiddish and Jewish influence the music? Because it’s not stereotypically Jewish sounding music at all, which is something that’s interesting about the album.

AW: I set these poems the way I would set any poem. Like in my setting of Emily Dickinson on the album I don’t reference American folk music just because she’s an American poet. Similarly just because they’re Yiddish poems, I’m not referencing Yiddish folk music, but rather using an abstract musical language to explore the ideas of the poems.

AG: One thing that struck me is that you use repetition so beautifully in the music, but the text has very little repetition which is so unusual for art songs and poetry. There’s like no repeated text in those poems.

AW: I really like the kind of spoken immediacy of a text that could be said to you by another person. In these poems it’s as if someone is talking to you, telling you an idea. There’s something immediate about it that I really like.

EP: I thought the music was very suited to the poems. The poems sort of present an idea – it’s not like a traditional song with a verse and chorus – in a way, like you say, its conversational. Someone’s presenting you with an idea or a feeling.

AG: Why does the lack of repetition in the text contrast so much with the repetition of the music?

AW: Each of the songs has a musical conceit taken from the poetry in some way. For example, the opening song sets a poem by Anna Margolin which has this beautiful image of walking around a square, together with someone. I latched on to this idea of the quotidien feeling of walking around, as a poignant metaphor for moving through life, and so that song is based on a slow, processional sound. That was for me a way to craft a musical world in my own musical language around the imagery of the poem.

EP: I’m guessing that Eliza Bagg, the singer on the album, isn’t a part of the Jewish music world. How did she react when you asked her to sing songs in Yiddish?

AW: Eliza is someone I’ve collaborated with a lot. She has a wonderful, versatile voice and sings everything from indie pop to Bach and medieval music. She keeps joking that I’m making her more Jewish. She’s sung a bunch at YIVO now and I also wrote a song in Hebrew for her for something else.

EP: Considering the stereotypes, I don’t think people expect Yiddish to serve to inform their sense of identity.

AW: I think Yiddish and this kind of poetry in particular offers people an avenue into thinking about what it means to be Jewish. In mainstream American society the idea is that being Jewish is your religion. And if it’s not your religion there’s a vague sense that its a people with a cuisine and a culture, but that’s not fleshed out for most people.

AW: But I think literary culture is one of the things – alongside history and other aspects of culture – that can help flesh that out for people. And so engaging with it is really special, and really meaningful.

and all the days were purple is available from Cantaloupe Music on April 12th, and in person at the free release concert at the YIVO Institute for Jewish Research on April 9th, in the Center for Jewish History 15 West 16th Street, New York, NY 10011.