When 250 Orthodox Jewish Immigrants Worked As Extras For Cecil B. DeMille 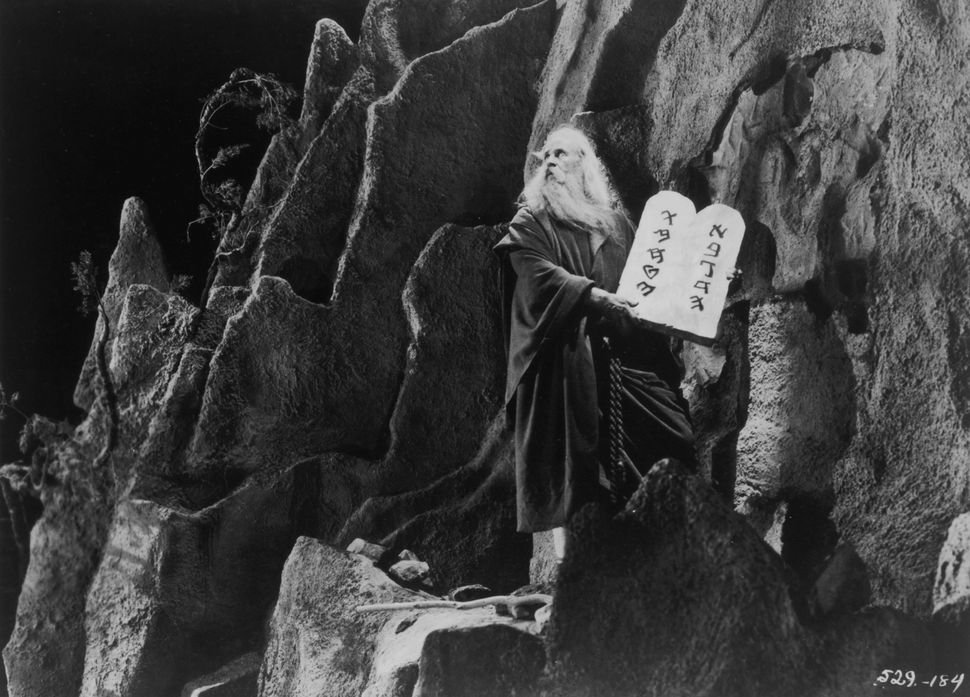 Before Charlton Heston: Cecil B. DeMille’s first version of “The Ten Commandments” was a silent, black-and-white film made in 1923. Image by Getty Images

Among the thousands of extras Cecil B. DeMille hired for his original, silent version of “The Ten Commandments” were 250 Orthodox Jewish immigrants, newly arrived in Los Angeles from Eastern Europe The director hoped that they would lend a sense of human verisimilitude to the project: “We believed rightly that, both in appearance and in their deep feeling of the significance of the Exodus, they would give the best possible performance as the Children of Israel,” he wrote. In May 1923, DeMille accompanied the extras to the Guadalupe-Nipomo Sand Dunes in northern Santa Barbara County, California, where he had erected an enormous, ersatz City of Rameses guarded by 35-foot-tall statues of the Pharaoh and 21 5-ton plaster Sphinxes.

The immigrants had, like other members of the company, signed contracts that began with the words “This location is not a vacation.” They would eventually spend three weeks on the film set, shielding themselves from the sun with improvised handkerchief turbans, hiding from sandstorms under woolen camp blankets and sleeping under old canvas tents. But they were paid well: $10 a day for adults, $7.50 a day for the children.

At the end of each day’s filming, they were carried across a mile of sand by horse-driven sleds to Camp DeMille, the company’s sprawling home base on the beach. The 5 1/2-acre site included 1,000 two-person tents; a hospital tent; a post office tent, two mess halls; stables for 5,000 horses, donkeys, sheep, goats and camels, and a large enclosure for the viewing of daily rushes.

DeMille made certain that the camp had its own synagogue, presided over by a Los Angeles rabbi, and an interpreter for the many immigrants who spoke only Yiddish. After a disastrous first night at Camp DeMille, during which the Jews had been served a ham-and-cheese dinner, the director was sent to Los Angeles to bring back a kosher chef.

Kosher rules were subsequently observed throughout the camp. Men’s and women’s quarters were separated by a boardwalk dubbed Lasky Boulevard, and men were not allowed into the women’s section without a special pass and a chaperone. Drinking and coarse language were prohibited. It was all enough to make one wonder if DeMille secretly meant to encourage the kind of writhing-on-golden-calves debauchery for which his films were already famous. The mind reels at the opportunities for commandment-defying high jinks at Camp DeMille.

Any historical record left behind by the cast and crew has yet to be discovered, however, because the entire camp; its dining halls and latrines; its abandoned photographs, journals, lunch pails, tobacco tins, shooting scripts, whiskey flasks and mash notes; the enormous City of Ramses itself, and all the detritus left lingering at the feet of its Sun Gods were bulldozed and buried under 6 feet of desert sand after the last day of shooting. DeMille was said to be nervous about some other filmmaker’s possible poaching of the set, a common practice in the early days of Hollywood.

There is now a one-room, tin shack museum at Guadalupe-Nipomo that houses the few cracked and yellowed artifacts — fingers from a hand of Ramses, a cafeteria tray — that have made their way to the surface over the years. The filmmakers’ attention to detail and historical accuracy is evident in mounted, side-by-side comparisons of props from the movie and photos of their original counterparts in Egypt. 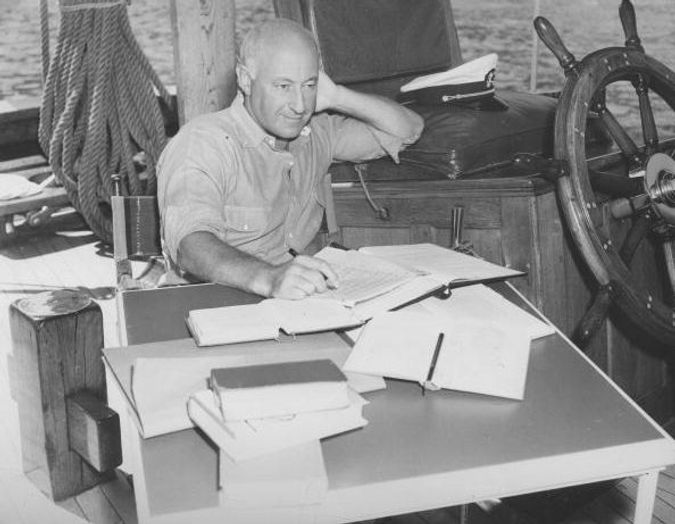 The famously fastidious DeMille wanted every aspect of the shoot to be historically accurate and to help make the experience for the actors as authentic as possible. Rita Kissin, a writer and extra on the set, overheard a conversation between two middle-aged women at one of the wardrobe tents as they tried to figure out how to drape their elaborate slave-rag costumes. She transcribed it, in the anthropological spirit of the times, as follows: “Take that off’n you, Mrs. Rosen, or the director will be mad mit you. I’ve heard DeMille say in the olden times there wasn’t no safety pins.”

When the day for the shooting of the movie’s big scene arrived, a Hollywood columnist named Jack Jungmeyer parked himself by a 50-foot tall pylon at the edge of the “City of Rameses” to witness the Jews’ flight from Egypt. Thousands of extras and animals gathered at the towering, faux-copper gates of the city, and upon DeMille’s bark of “Action!” they began to stream down the avenue of Sphinxes, out into the forbidding Sinai of the central California coast. A few moments later, Jungmeyer wrote, as they passed the pylon, “A strange thing happened… above the bleat of sheep and the lowing of cattle, haltingly at first then sure, swelled the ancient Hebraic chants — ‘Father of Mercy’ and ‘Hear, O Israel,’ the ‘Lord our God the Lord is One.’ This was not in the script, not in rehearsals. Here was something flaming from the heart of a people.”

In documentary footage shot by filmmaker Peter Brosnan, an actress named Leatrice Joy says: “God almighty, you never heard anything so sad as the dirge of the Jewish people. They gave the impression that this was it. It was never done before. They were living the time, these people. They weren’t acting.” An older Jewish extra told Jungmeyer: “We know this script — our fathers studied it long before there were movies. This is the tale of our beginnings. It is deep in our hearts. It’s just like living in dem times when we got the Torah, an’ now we’re going to get it all over again in a picture by Mr. DeMille.”

The extras’ reactions would not have been very surprising to most Jews. A Seder is designed to make the flight from Egypt a personal memory for every member of the tribe, to render the experience of Exodus as immediate and visceral as possible. The Haggadah tells the story in the first-person plural: We were slaves in Egypt. Not “our ancestors,” not, “the ancient Israelites.” “We.” We were slaves. And now we’re free. We are free and living in the immediate afterward of that moment.

DeMille was a practicing Episcopalian and saw his work directing religious epics in evangelical terms. He was proud, he said, that, “[his] ministry was making religious movies and getting more people to read the Bible than anyone else ever has.” But DeMille was also a Jew, at least according to the precepts of Jewish law. His mother, Matilda Beatrice DeMille, was born in 1853 to the prominent Samuel family of Liverpool, England. At the time that Cecil B. DeMille was shooting “The Ten Commandments,” in May 1923, his second cousin, First Viscount Herbert Louis Samuel, was serving as the high commissioner of British Mandate Palestine, and as such was the first Jew in 2,000 years to govern the historic Land of Israel.

The viscount would have no doubt witnessed scenes among the early Zionists under his protection, similar to those enacted by the “children of Israel” under cousin Cecil’s supervision 7,000 miles away. One of the film’s extras would later recall that, when the actor portraying Moses stood on a rock at the Pacific shoreline, preparing to part the “Red Sea” as hundreds of horse-drawn chariots bore down on real Jews only weeks removed from the pogroms of Russia’s Kiev or Poland’s Warsaw, “Tears trembled on wrinkled cheeks, sobs came from husky throats. For many, the world had moved back 3,000 years, and they stood once more on the shores of the Red Sea, viewing once more the good omen of deliverance.” For its participants, the Guadalupe Exodus was a true and deeply felt experience of a moment stitched together from figments of collective memory.

No tangible evidence of that memory has ever been found. There is no evidence of an ancient mass migration of Jewish slaves from Egypt, nor of a sudden influx of a new population into Canaan. The Sinai has yet to yield so much as a Hebrew knife-tip or bracelet, a shard of Jewish pottery or bone. Small tribes of Canaanite shepherds were known to occasionally trek back and forth to Egypt around the time the Exodus is supposed to have happened, and may have been the source for some parts of the story, but it is doubtful they ever traveled in anything approaching the numbers talked about in the Bible. As Israeli archaeologist Ze’ev Herzog has said: “The Israelites never were in Egypt. They never came from abroad. This whole chain is broken. It is not a historical one. It is a later legendary reconstruction — of a history that never happened.”

The Guadalupe Exodus is a history that happened, a sublimely ironic and perfectly Jewish testimony that essential truth is sometimes more easily apprehended when untethered from historical fact. The Passover story’s fictions need not lessen devotion to its principles. Freed from obligation to believe the story, we are freer to believe in it: in its beauty, its celebration of upheaval and change, its promise of renewal, its’ emphatic invitation to the stranger. The most “authentic” experience of Exodus, after all, may have been had by people participating in a work of collective memory, art and imagination thousands of years removed from the original story, in perfect keeping with the mnemonic poetry at the heart of the Seder.

The Bible refers to Israel as “a land that swallows its inhabitants,” but of course the same could be said of Hollywood, Beijing or Guadalupe-Nipomo. The Torah and other religious texts may admonish us that we come from and shall return to dust, but that hasn’t kept many humans from claiming ownership of the stuff, from settling it, selling it, stealing it or pushing it around in defiant fear.

The spot where 250 Eastern European Orthodox Jewish Los Angelenos pretended to be ancient Israelites is known as The Western Gate, as in the Western gate of civilization, among members of the Chumash Indian tribe, who have inhabited the area for 10,000 years. DeMille hired members of the tribe to build, and later bury, the sets for “The Ten Commandments.”

Spanish settlers changed the name of the area when they arrived in 1772, and then promptly made slaves of the Chumash, forcing them to build the sprawling adobe mission, which would ultimately be their undoing. The Spanish church went on to claim the entirety of the central coast, and to exploit the Chumash for another 100 years.

Oil companies now own most of the land. There is a huge reserve under the Guadalupe Dunes, far beneath the remnants of “The Lost City of Cecil B. DeMille,” a 20-mile long underground lake of liquefied former inhabitants from which the energy giants are furiously extracting the means of their own demise. The Guadalupe dunes are part of an extremely fragile ecosystem and are particularly susceptible to rising sea levels caused by the use of fossil fuels. Climate scientists consider the area to be one of those most likely to be reclaimed by the Pacific within the next 50 years.

Peter Birkenhead is a writer based in Washington, D.C.

This article was supported in part by the generosity of the 21st Century ILGWU Heritage Fund Read more: https://forward.com/culture/405607/iraqi-jews-in-exile-claim-iraqi-jewish-archive-so-does-iraq/

When 250 Orthodox Jewish Immigrants Worked As Extras For Cecil B. DeMille