What The New Left Could Learn From The Old Left 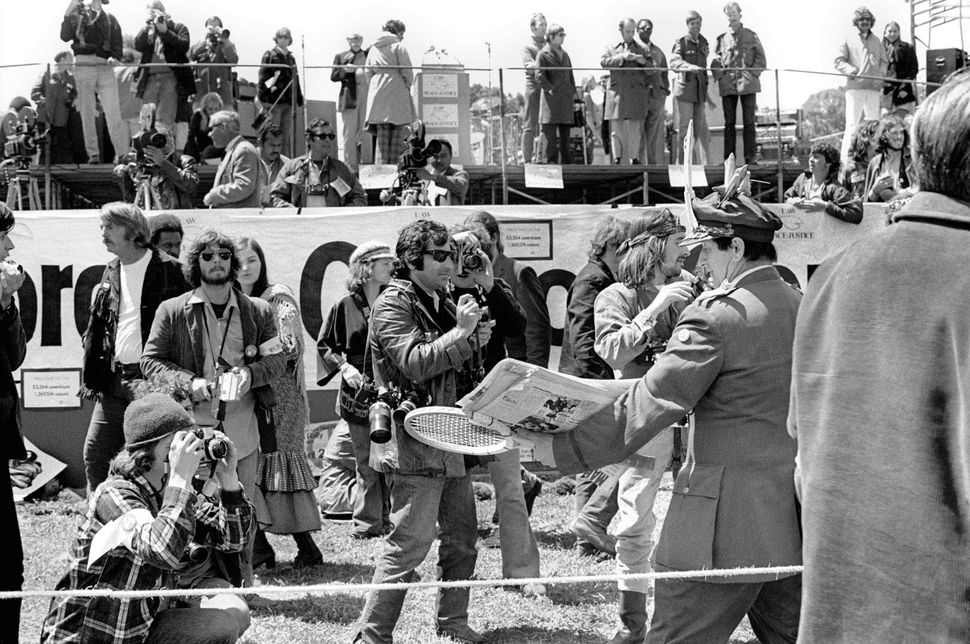 Michael Walzer’s “Political Action: A Practical Guide to Movement Politics,” published in 1971 and newly reissued by NYRB Classics, may be the least exciting book ever written about taking to the streets. I don’t mean that as an insult, and I’m not at all convinced that Walzer wouldn’t take it as an outright compliment. Levelheadedness isn’t just his book’s tone. It’s also his Weltanschauung, what gonzo comedy was for Abbie Hoffman’s “Steal This Book,” and burning indignation was for Eldridge Cleaver’s “Soul on Ice” — the medium that allows the author’s thoughts to flow through the reader and outward to society.

Sometimes, a book’s final sentence compresses the sense of the entire work. Where Marx and Engels wrote “Workers of the world unite!” Walzer has, “No one else can carry us forward to a society less oppressive, less unjust, more routinely democratic than the one we have now.” Notice the odd joining of idealism and qualification, the bloodlessness of “more routinely” and “less unjust,” and you’ll begin to understand why reading “Political Action” is such a frustrating, and valuable, experience. The “no one else” in Walzer’s sentence refers to modest American citizens — those who want to change their country even as they avoid the limelight and the guerilla tactics of the far left. We might romanticize militant radicals because they get the headlines, but it’s the anonymous citizen activists who get things done, even when they take years to do them.

Walzer calls for a patient approach to activism — a rethinking, in other words, of the excesses of the New Left. Agree with him or not, it’s hard to deny that he knows his subject. As an undergraduate in the 1950s at Brandeis University (where everything that would happen in the 1960s happened first, he’s fond of saying), he met Irving Howe, who was then in the early stages of founding the magazine Dissent. In 1960, Howe sent Walzer, on behalf of Dissent, to North Carolina to report on the black students sitting in at Woolworth’s; by the middle of the decade, Walzer had joined the magazine’s editorial board, where he’d stay for the next 50 years. With his enthusiasm for the sit-ins; his early, uncategorical opposition to the Vietnam War, and his occasional disdain for sex, drugs and rock and roll, Walzer was sometimes an ally of 1960s radicalism and sometimes a critic. One could interpret “Political Action” as a kind of general check-up for the left, with Walzer separating the healthy bits from the sickly indulgences.

By 1971, the check-up was long overdue: The counterculture was inescapable, hundreds of thousands had banded together to protest Vietnam and the military-industrial complex, and Richard Nixon was the leader of the free world. The left hadn’t merely failed to achieve its goals; its much-publicized displays at Columbia and outside the Democratic National Convention had helped bring about the antithesis of those goals. In 1968, Nixon campaigned as a friend to anyone to the right of the far left, and the trick worked: In his “Silent Majority” speech, delivered less than a year after he’d won the election, he accused the left of valuing the opinions of a hysterical minority over the morals of the good, plain American people. A few months later, with the encouragement of his crackpot national security adviser, he started an illegal war with Cambodia.

Hypocritical though it was, Nixon’s diagnosis of the American left contained more than a grain of truth. Even Walzer doesn’t bother to deny that the actions of the DNC demonstrators, the Weathermen and the like had alienated the bulk of Americans and, more to the point, American voters. In “Political Action,” he makes his own appeal to the Silent Majority — even if, unlike the president, he sees this group as basically progressive (now, as in the early 1970s, the polls support Walzer, not Nixon; healthy majorities of Americans support gun control, decriminalization of drugs, redistributive taxes, defense cuts, etc.). The problem, as Walzer and many others saw it, was that renegade leftists had alienated the people who should have been their allies. “The worst thing of all,” he writes, “is hysteria, in some ways the most sincere response to political crisis, but the most disturbing and frightening to uncommitted onlookers.” What, in that case, is the difference between hysteria and activism. Between attracting uncommitted onlookers and scaring them off? Between progressive electoral victories and six years of Tricky Dick?

One of the most telling quotes Walzer used for his long Dissent article on the Woolworth’s sit-ins came from a black student he met shortly after arriving in Durham, North Carolina. “We don’t want brotherhood,” the student told him, “we just want a cup of coffee — sitting down.” It might seem silly to take this too literally, just as it would be silly to take literally Rosa Parks’s claim that she sat at the front of the bus because she was tired. But Walzer has a more sophisticated interpretation in mind. “This was a demand,” he writes, “for an end to the ordinary, unrecorded, day-to-day indignity of Negro life in the South — an indignity more demoralizing, perhaps, than the terror of lynching or murder has ever been.”

It is this emphasis on the day-to-day that Walzer celebrates in “Political Action,” and he finds it missing in much of the New Left. Activism at its best begins narrowly, with a specific issue that affects the activists directly. As it grows, it needs to maintain its focus on the particular, compressing lofty points about justice and equality into something as commonplace as a cup of coffee. These sorts of single-issue campaigns aren’t as satisfying as their louder, more utopian cousins, but they get results. “Indeed,” Walzer writes, “it is hard to think of any other kind of victory that citizens activists have ever won. Winning turns out, of course, to be something less than they expected. The end of child labor, the achievement of women’s suffrage, prohibition and its death, the end of this or that war: none of these planted the new Jerusalem.”

If the Woolworth’s sit-ins represent activism at its most elegant, Walzer’s least favorite kind may be the student demonstration, which, by his reckoning, is too often in danger of collapsing into a smug, showoff-y mess. Much of the second half of “Political Action” can be read as a tut-tut-ing to the would-be radical kids who gave the left a bad name. Adopting the language and symbols of the avant-garde, we’re informed, “inevitably turns political action into an elite performance.” By the same token, it’s usually “a mistake for activists to imitate the life styles of Bohemia,” styles that Walzer sneeringly reduces to “sex or drugs or any other fashionable and exciting issue.” It never seems to occur to him that fashionable and exciting issues have a way of recruiting useful activists — for every fair-weather college radical who comes for the free pot, there’s a sincere lefty who stays for the politics. Separating the “good left” from the bad is trickier than he lets on.

The question, “Why reissue this book now?” is probably asked more often of nonfiction than of fiction. In May, NYRB Classics is publishing a new translation of Multatuli’s 1860 novel “Max Havelaar,” apparently for no more pressing a reason than its being a good book that deserves to be read more widely. On the other hand, the reissued “Political Action,” — arriving shortly after a defeat for the left that makes the Democrats’ loss in ’68 look like a papercut — should inspire a carload of comparisons between then and now. Walzer addresses a few of these in his new introduction. By his own admission, the chapter in “Political Action” on the mass media needs revising (although the part about “the danger of rhetorical and tactical escalation in search of publicity” could have been written last Tuesday). His claim that the poor “have more immediate and pressing concerns than those of the movement” seems dubious at best. During the Vietnam War era, for example, working-class conscripts, far more than wealthy draft-dodgers, had an immediate, life-or-death stake in ending the war. In the early 1970s, it’s worth noting, 80% of grade school-educated Americans favored withdrawal, compared with only 60% of the college-educated).

The chapter on “The Woman Question” is exactly as embarrassing as it sounds.

More generally, Walzer’s emphasis on practicality makes for an incomplete — maybe even impractical — view of the left. In order for political activists to forge “alliances with the largest available groups,” he says, “it is often necessary to say no” to militant, radical groups. True — but it is often necessary to let those groups carry on, too. Without the pugnacity of the American Communist Party in the 1920s, it’s difficult to imagine the progressivism of the New Deal. Without the “disruption and violence” of countless ‘60s activists (dismissed by Walzer as mere Jacobins), it’s difficult to imagine the careful victories of King and John Lewis. When the Democratic Party shuns the far left, it wins elections but drifts rightward — until its fringe issues become the very issues Republicans once supported. Another quote, this one from Max Weber, comes to mind, stating that “man would not have attained the possible unless time and again he had reached out for the impossible.”

Even so, “Political Action” is a good, sound book full of good, sound advice. Its best passages have the gravity of firsthand experience and the concision of Sun Tzu or Machiavelli, even if those two come from the other side of the political spectrum:

Tactical choices should always have two characteristics: they should be repeatable (in the way that a Kamikaze pilot’s attack is not); and they should not have to be repeated.

Citizens come to act with one eye on what they are doing, the other fixed on its reflection in the media. They must continually astonish others in order to see themselves.

The movement must project the image of a national struggle, even if nothing is happening except in San Francisco and New York. But its members must not be taken in by their own projections.

Underlying all of Walzer’s prose, you can sense a quiet, unwavering confidence in the power of face-to-face relationships, a faith in the local that’s becoming increasingly rare among political thinkers in the age of the super PAC.

It may sound heretical to end an article about one of the great postwar American leftists by uttering the name Steve Bannon, but then again, nobody knows your strengths better than your sworn enemy. A few days after the Democrats won back the House, Bannon told reporters that “the left and the progressives, the Time’s Up movement… I think they did the hard work out in the field, the pick-and-shovel work.… And that’s why they won.” Tweets and posts have been getting most of the attention on the left of late, but it’s old-fashioned knocking on doors that makes the “alt-right” sweat. As long as this continues to hold true, Walzer’s how-to guide will be crucial reading.

What The New Left Could Learn From The Old Left