The Secret Jewish History Of “Rock Around The Clock” 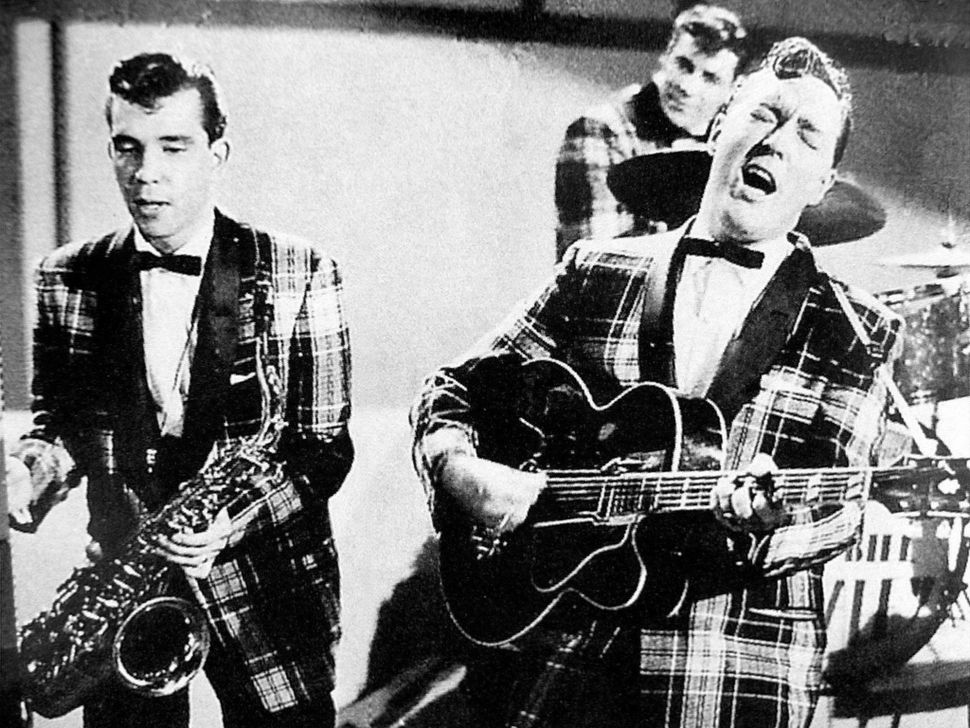 Although its exact origins are clouded, and to this day the subject of dispute, “Rock Around the Clock” was credited to two Philadelphia-born Jewish songwriters, each the son of immigrants. The song was probably written in 1952 by Max C. Freedman, with some input by a music publisher named James Myers who went by “Jimmy DeKnight” for songwriting purposes. Like other music publishers at the time, Myers may have demanded a co-writing credit from Freedman in exchange for publishing and copyrighting the tune, although in later years, Myers claimed the bulk of the creative credit for himself, assigning to Freedman a few mere finishing touches on the tune. That seems unlikely, given that Freedman was already a well-established Tin Pan Alley songwriter, known especially for writing country-flavored tunes for the likes of Gene Autry, Bing Crosby, Bob Wills and Willie Nelson.

Freedman wrote “Rock Around the Clock” with a regional country and Western bandleader in mind. A Michigan native, Bill Haley had enjoyed some success as a performing artist, especially around Philadelphia, and he was also a musical director at a radio station outside Philly. Haley was beginning to combine his honkytonk sounds with rhythm and blues; in 1951 he recorded a version of Ike Turner’s “Rocket 88,” which some consider to be the first rock-and-roll record. “Rock Around the Clock” was written to order by Freedman in the same manner for Haley, who began performing the song live in 1953.

At the time, Haley recorded for the Philadelphia label Essex Records, owned by Dave Miller, son of Jewish immigrants Albert and Olive Miller. For some reason, Miller didn’t want Haley to record “Rock Around the Clock.” Some say it was because there was bad blood between Myers and Miller. In the meantime, the tune was first recorded by a novelty outfit called Sonny Dae and His Knights in late 1953 and released in March 1954. Their version fell flat.

Myers then sought to get Haley signed to a different record label, one that would record him doing the song. When Myers played some of Haley’s early recordings for Milt Gabler, who worked at Decca Records in New York City, the timing was perfect. Decca had just lost one of its star performers, Louis Jordan. Haley’s style was much in the same vein as Jordan’s “jump blues,” so Gabler signed him as a replacement. Gabler, born to Jewish immigrant parents in New York City in 1911, had first founded the label Commodore Records, which was devoted to recording such black jazz artists as Lester Young, Louis Armstrong and Billie Holiday. It was Gabler’s Commodore that recorded Holiday’s “Strange Fruit” — written by the Bronx-born Abel Meeropol, son of Russian Jewish immigrants — when her regular label, Columbia Records, refused to touch it.

Little did he know what he was getting. At the first New York City recording session, in March 1954, Gabler reluctantly allowed Bill Haley and His Comets to track “Rock Around the Clock,” but only after the group had spent hours working on his preferred number, the Louis Jordan-styled “Thirteen Women (& Only One Man in Town).” When the first single came out in May, “Rock Around the Clock” was the B-side. Nevertheless, “Thirteen Women” garnered enough airplay and sales to give the song on the obverse side a leg up.

Meanwhile, Hollywood screenwriter and director Richard Brooks — born Reuben Sax to Hyman and Esther Sax, Russian Jewish immigrants, in 1912 — was hard at work adapting a novel about inner-city juvenile delinquency, called “Blackboard Jungle,” that he would direct for the silver screen. Brooks’s film starred Glenn Ford and featured early roles for young actors, including Vic Morrow, Jamie Farr, Paul Mazursky and a young black actor named Sidney Poitier. Brooks went searching for a song to play over the film’s opening and closing credits; Ford found the recording of “Rock Around the Clock” in his teenage son’s stack of 45s and gave it to Brooks, and the rest is rock-and-roll history.

The film itself was critically lauded although somewhat controversial in its portrayal of teenage rebellion and violence. That, combined with the shocking sounds of rock and roll — never before used in this manner in a Hollywood movie — was like the shot heard round the world launching the revolution of teenage culture. It also may have helped to tarnish the reputation of the music itself from the get-go by associating it with violence; in some theaters, the soundtrack remained muted while the opening song played. But there was no stopping the song.

In May 1955, TV host Milton Berle — born Mendel Berlinger in New York City — made the brave step of bringing Bill Haley & His Comets to perform on his nationally aired Texaco Star Theatre television variety show, where he accurately predicted that the song would go all the way to No. 1. Television variety show host Ed Sullivan followed a few months later, making the Comets the first rock-and-roll outfit to appear on that show, which would later air controversial, beloved and career-making performances by Elvis Presley and the Beatles. “Rock Around the Clock” climbed the hit parade in the United States all the way to the top, where it remained for an unprecedented eight weeks, inspiring an entire generation of fans and would-be musicians around the world — including a couple of lads from Liverpool named John Lennon and Paul McCartney, who would put together their own rock-and-roll combo just a few years later. The floodgates were open, and within a year, rock-and-roll artists like Presley, Chuck Berry, Little Richard and Buddy Holly would dominate the airwaves and record sales. Tin Pan Alley was dead. Long live rock and roll.

Seth Rogovoy is a contributing editor at the Forward. He frequently mines popular culture for its less-known Jewish connections. He is the author of “Bob Dylan: Prophet, Mystic, Poet” (Scribner, 2009) and is currently writing a biography of George Harrison.

The Secret Jewish History Of “Rock Around The Clock”