Carl Reiner On Judaism, Atheism And The ‘Monster’ In The White House 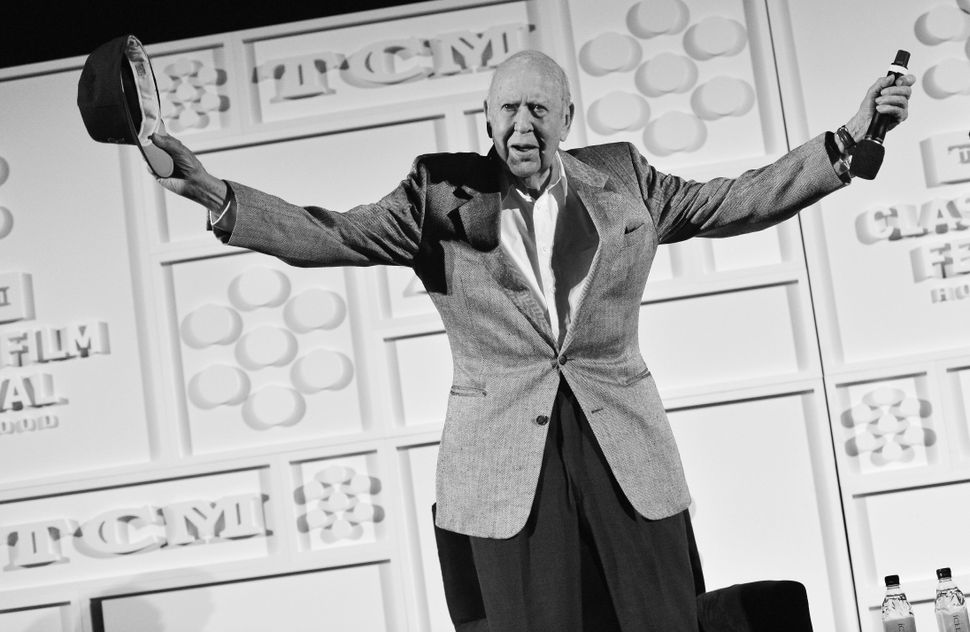 At 96, Carl Reiner still slays. The comedy deity, who is being honored this week at the Westchester Jewish Film Festival, has maintained his singular outlook — melding the clear-eyed and cockeyed, the everyday and absurd. Busier than most people half his age, Reiner’s prolific on Twitter, where the current occupant of the White House has been a frequent target. And he’s still cranking out content that proves funny is ageless.

“Carl Reiner is a brilliant artist who embodies and understands Jewish culture and Jewish history,” said Bruni Burres, curator of the Westchester Jewish Film Festival at the Jacob Burns Film Center in Pleasantville, NY, about 35 miles northeast of New York City. “A lot of his work’s funnier now than it even was when it came out. We’re still in shock with our mouths dropped that he said yes to the honor. To us, he is God.” Reiner will Skype in for Q & A sessions with festival audiences on April 6 and 14.

Reiner spoke to the Forward from Beverly Hills, CA.

You’re being honored at the Westchester Jewish Film Festival, but some of the films they’re highlighting don’t have explicitly Jewish content — “The Jerk,” say, or “Dead Men Don’t Wear Plaid.” Is your body of work Jewish?

Well, I was born Jewish I will die Jewish. But I’m a confirmed atheist. There’s no power above us. If you think about it, during the Holocaust, six million people were all praying to God to do something. He must have been very busy. Jews do have a moral code that’s fairly good, though.

You landed your first television job in 1949, performing on the Admiral Broadway Revue with Sid Caesar. When you started in the business, did you face any anti-Semitism?

No. The only anti-Semitism I faced was in my Bronx neighborhood, growing up. It was Italian Catholics and Jews living together. They were deeply anti-Semitic, and a lot more pugnacious. You’d get bumped in the head. That said, the Jewish accent was made fun of, and used as a comic piece. That’s why Mel [Brooks] and I waited [until 1961] to record “The 2,000-Year-Old Man.” For six years, we only did it live. Cary Grant was a fan of the record, by the way. He took it to Buckingham Palace, and told us, “She loved it.” I said, “Who?” He said, “The Queen Mother.” I thought, if the biggest shiksa in the world loves it, we’re home free.

You must get asked by younger performers, writers, and directors what makes something funny. What do you tell them?

What makes something funny is saying the absolute truth. Everyone has the same experience with marriage, family; say the absolute truth, people will find it funny. When I wrote “The Dick Van Dyke Show,” I said “I’m going to write about what I know” — getting married, living in New Rochelle. Everyone has the same kind of relationship. Everybody goes through same thing if they have children, a wife, neighbors. It’s universal.

You seem to manage a never-ending list of projects. What can we expect for 2019?

Yes. I wake up and I have something to do, and it’s usually finishing a book. My new favorite thing is photos of celebrities that I scrunch by hand. It’s becoming a book. I found a People magazine in my garbage can, unscrunched the cover, and it was Angelina Jolie. The left-hand page in this book is a scrunched photo, the right-hand page is the celebrity. It’s like a game show. We’ve got 300 pages of this just coming off the press. Next, we’re scrunching the greatest artworks in the history of the world, from the Sistine Chapel to modern art. I’m also finishing a project on “The Dick Van Dyke Show” [annotating episodes for a digital archive at the National Comedy Center].

You’ve been vocally anti-Trump on Twitter and elsewhere. Having lived through all you’ve lived through, are there words of encouragement you have for people who are despairing about our political climate?

You know something? He’s doing our work for us. We have a comedy in the White House that makes it easy for me to get laughs. The sad thing is he could wreck the whole country before he gets out of office. He’s a monster, doing so many crazy things, and telling so many outright lies, that even his own party can’t get behind him. When they put together all the things he’s said lately, only the very foolish can still be fooled. I keep saying that I have to live long enough to see him out of office.

Carl Reiner On Judaism, Atheism And The ‘Monster’ In The White House