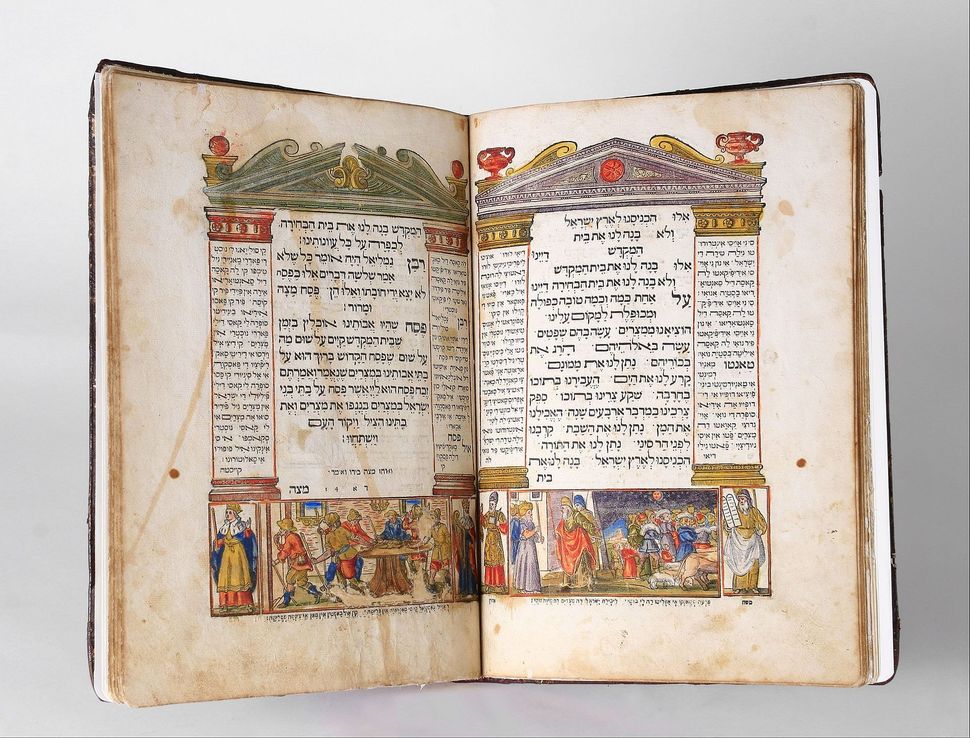 I’ve been tracking the release of new haggadot for the Forward for eleven years now. I’ve reviewed the good, the bad, the overproduced, the underappreciated. (Some of my all-time favorites are listed at the end.)

And over the years, it’s been remarkable to observe how the production of haggadot each year reflects the continued vitality of the Passover holiday. The Jewish community may be coming apart at the seams, fracturing over Israel, Trump, and anti-Semitism, among other things, but we still have the Seder.

In fact, maybe that’s no coincidence: Passover has, for two thousand years, been a holiday of “discussing” (my family’s euphemism for arguing). Since the days of Korach (or maybe Cain), we’ve always been two Jews with three opinions.

This year’s new haggadot are a less prestigious bunch than most past years’. No massive, illegible tomes from leading American Jewish novelists (“The New American Haggadah,” 2012). Nothing from network TV anchors (Cokie Roberts’ “Our Haggadah,” 2011) or Jewish mega-philanthropists rich enough to vanity-publish outright heresy without anyone objecting (“The Bronfman Haggadah,” 2013).

I’m not sure why that is, but I think it’s no coincidence that over on Haggadot.com — first noted in this column in 2011 — the supplements, original contributions, art, texts, commentaries, and overall brilliance continues to get better and better. Looking for traditional Jewish text debate? My alma mater the Pardes Institute will hook you up. How about materials aimed at families, or LGBTs, or those new to Judaism? Check, check, and check. There’s even, for your woke Seder needs, a Black Lives Matter Haggadah put out by Jews For Racial and Economic Justice (JFREJ).

Like many Jewish publications, online Haggadah resources are vanquishing those in print. Yes, for middle-aged Gen-Xers like me, holding a book still feels better than shuffling printed PDFs or scrolling on the Kindle or iPad. And there are still some great new entries this year. But check Chapter Five of Daniel. The writing is on the wall.

This year’s standouts? Definitely “The Kveller Haggadah,” written by two Forward alumna, Elissa Strauss and Gabrielle Birkner. Like the Kveller website, “The Kveller Haggadah” is the liturgy of choice at the Seder of Charlotte York Goldenblatt (“Sex & the City,” if you have to ask): smart, feminist, sometimes cutesy, enthusiastic about matters Jewish and hip. If your daughter likes her Mandarin teacher, she’ll love “The Kveller Haggadah.”

Another standout this year is Jordan Gorfinkel and Erez Zadok’s “Passover Graphic Novel.” I admit, when I saw the title, I figured this would be another novelty project, but in fact, “PGN” is super useful, accessible (with full transliteration and traditional text), and with a running graphic novel commentary that is exceptionally well-drawn and conceived. There are lots of funny asides (to illustrate that we are still not fully free today, there’s a drawing of traffic on the George Washington Bridge) and insightful comments. To be honest, it blew me away.

But if you really want to challenge your teen or pre-teen this year, pick up a copy of the (to me) indecipherable “Emoji Haggadah,” which, yes, is the entire haggadah written in emoji. Some of the translation choices are dubious – really, the emoji for “Om” is the signifier for “God?” A shoe signifies Jacob (because heel… shoe)? I’m not sure if anyone can really decipher this thing, but if anyone can, it’s someone under 18.

There are some other solid entries this year. HIAS’s refugee-focused haggadah, connects the migration story of the Exodus to the struggles of the Rohingya, Syrians and Somalis. The “Yada Yada Haggadah” is perfect for Seinfeld superfans (if any still exist); the whole thing is essentially an extended script of the show (needless to say, double dipping the karpas is not tolerated). And Shlomo Levin’s Human Rights Haggadah blends the full traditional liturgy with provocative questions on human rights in 2019.

And, as usual, Artscroll continues to churn out solid haggadot that, while not aimed at Jews like me, continue to enrich the Orthodox library. This year’s include commentaries by Rabbi Shimon Schwab and Rabbi Yaakov Bender. Meanwhile, Urim Publications has published a Conservative equivalent, built around the writings of Rabbi Eliezer Berkovits.

So that’s 2019. With the production of print haggadot possibly declining, though, now seems like a good time to review my favorites since I first began reviewing haggadot for the Forward in 2009. Who knows if I’ll get another chance?

First, I love the encyclopedic resources which are useful if you’re planning in advance: Noam Zion and David Dishon’s “A Different Night: The Family Participation Haggadah” (1997), David Arnow’s “Creating Lively Passover Seders” (2004), and the two volumes of “My People’s Passover Haggadah” (2008). You can’t throw your Seder guests into any of these; they’ll drown. But if you pick and choose in advance, these resources can provide all that you’ll need and more.

Second, I turn to a small handful of idiosyncratic haggadot each year because their worldviews are similar to mine. These include Debra Jill Mazer’s “Open-Eyed, Heart-Wide Haggadah” (2010), Rabbi Rachel Barenblat’s “Velveteen Rabbi’s Haggadah” (updated frequently), Michael Kagan’s “Holistic Haggadah” (updated in 2018), Rabbi Lynn Gottlieb’s amazing “Haggadah, A World Beyond Borders” (2017) and the late Rabbi Ron Aigen’s masterful “Wellsprings of Freedom: The Renew Our Days Haggadah” (2012).

This second group may not be for everybody. But they are for me: spiritual, creative, innovative, unusual, thought-provoking, justice-focused, and progressive. I love that they exist, and love copy-and-pasting from them each year. If you share these values – and hey, not everyone does – you will too.

Finally, over eleven years of reviewing haggadot, I’ve come to appreciate simplicity. One of the most popular new American haggadot of recent years was so overproduced, overdesigned, and, to use the Yiddish, ongepotchket, I had trouble finding my way – and I’m the rabbi who reviews haggadahs. Others seem designed to be looked at, not used.

These three haggadot don’t sacrifice intelligence for simplicity. Rather, they highlight the virtue of curation, and the old saw that “less is more.”

Most importantly, please, I’m begging you, for literally the eleventh time, do not use an un-annotated Haggadah, whether printed by a coffee company or anyone else. Please do not read the opaque, puzzling text straight through. The Seder is not meant to be a rote recitation of words that make no sense. As these and many other haggadot reveal, it’s meant to inspire, inform, teach, and provoke. For once, you’re meant to argue. Don’t miss the opportunity.