Can ‘Tootsie’ Turn Men Into Mensches In The #MeToo Era? 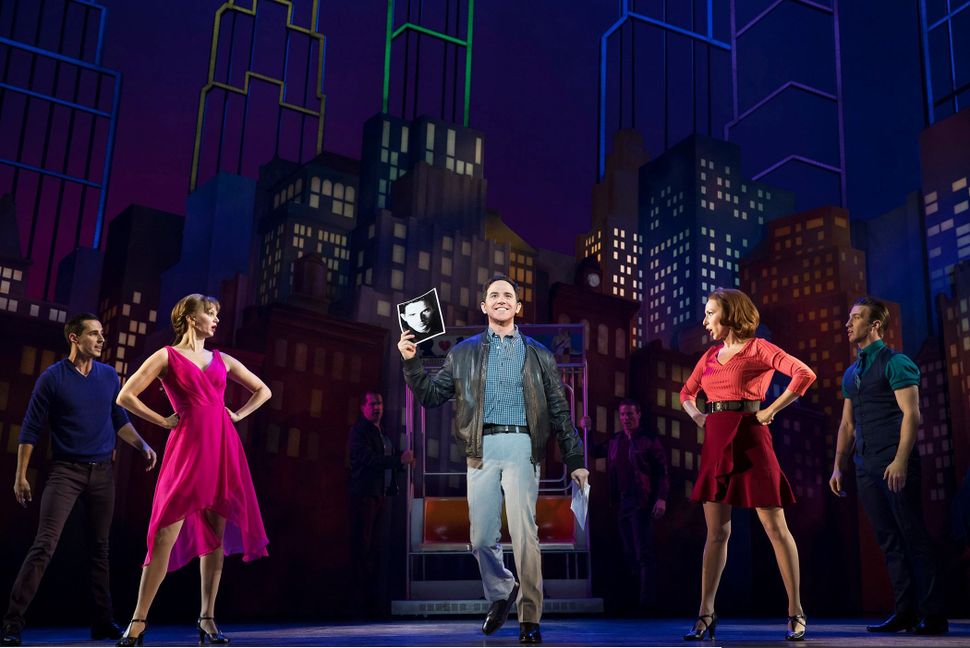 After winning Tony and Grammy awards for his score for “The Band’s Visit,” composer-lyricist David Yazbek is poised for another Broadway hit with the musical adaptation of Sydney Pollack’s 1982 film classic, “Tootsie.” With book writer Robert Horn and director Scott Ellis, Yazbek (“The Full Monty,” “Dirty Rotten Scoundrels,” “Women on the Verge of a Nervous Breakdown”) has updated the story of an ornery actor who impersonates a woman to find work – and learns some important lessons along the way. Santino Fontana, of Amazon’s “Crazy Ex-Girlfriend” and Broadway’s “Rodgers and Hammerstein’s Cinderella,” stars in the part made famous by Dustin Hoffman. The show’s Chicago debut last fall received enthusiastic reviews. “Tootsie” is scheduled for an April 23 Broadway opening. The Forward talked to Yazbek (whose maternal grandmother was Jewish) by phone about his creative process.

What were the origins of the project?

Scott Sanders, who’s the producer of “Tootsie,” had gotten the rights [in 2012]. He’d already been down the road with other potential writers, composers. [He] asked me a few times, and I said no several times.

Because I didn’t understand how you could update it and make it new and not just a rehash of the movie with some songs. But then, something clicked, and I realized there was a way to do it. I wasn’t sure what it was, but sometimes you have these intuitions that something most likely could work, and you just go off of that.

How did you end up getting hooked up with Robert Horn?

Robert was the savior of the project. I’d never heard of him. He’s a very successful TV writer, he has done theater, but I didn’t know him. Scott Sanders, in a brilliant act of producing, remembered stuff of Robert’s that he had seen – including a reading of a country western musical called “Moonshine,” which was kind of legendary. There were two readings done in New York City. Everybody was talking about how funny they were, like the Second Coming of “The Book of Mormon” or “The Producers.” Scott saw it, and said, “This guy has really got it.” I think the big story in “Tootsie” is going to be that Robert Horn is like a contemporary Neil Simon.

“Tootsie” seems like a big shift from “The Band’s Visit,” maybe closer in tone to “Dirty Rotten Scoundrels.”

I would say it’s closer to “The Full Monty.” “Dirty Rotten Scoundrels” is kind of arch, and the comedy comes out of a very comedic circumstance. “Full Monty” and “Tootsie” fundamentally come out of the characters’ conundrums. They have very relatable problems. “Tootsie” really is a story of someone who can’t get what they deserve and what they want, someone who believes very, very strongly in their art, but their personality makes it hard for them to get anywhere. Then, by looking through the eyes of someone of the opposite sex, [the character] learns how to be more of a human being, but along the way gets what he wants. And then you have that cautionary [warning]: “Beware of getting what you want.”

Because there are always unforeseen consequences?

You’ve said that you see the main theme as the transformation of a semi-toxic man into a mensch. That seems similar to the movie.

What did they think it was about?

I think they thought – and it was correct – that it was about feminism. The movie confuses me because of the Eighties version of feminism, of male chauvinism – caricatured versions. There’s a lot of stuff to be mined there that’s very deep, and that’s what we were trying to do with the musical.

**You’ve said that you started writing before the whole MeToo movement, but that some of your choices ended up being inspired by the movement. **

Everything in pop culture has been influenced by that – everything. It’s a really interesting time. I guarantee you we’re going to be continuing that conversation as we work.

Can you be more specific?

I can’t be too specific without ruining the audience experience. We’ve made changes to the original story of the movie, and a lot of them are the delicious twists.

I know you’ve updated the time to the present and that the Michael Dorsey/Dorothy Michaels character is now in a Broadway musical.

So it ends up being self-reflexive and about Broadway?

Not as much as you might think. A lot of Broadway musicals resort to this kind of navel gazing for comedy reasons, and also because they’re a little embarrassed about the art form. We’re not making a lot of showbizzy Broadway jokes. We touch on it kind of lightly, and when we do, it’s really funny. More importantly, we don’t linger in that world. The balance is mostly toward what happens outside of the show-within-the-show, just like in the movie. The real conundrum and the fun of it is when [Michael] is living a dual personality in normal life.

How did the casting of Santino Fontana influence the writing for the part? He’s much more of a matinee idol than Dustin Hoffman was.

But Dustin Hoffman came into “Tootsie” as a movie star – so in a way he was a matinee idol, even though he doesn’t look like a matinee idol. I don’t think Santino looks like a matinee idol. To me, he looks like just a dude; he cleans up nice. First of all, [the director] Scott Ellis came in saying, “This is who’s going to play the part.” I said, “Shouldn’t we be auditioning a lot of people?” He had worked with [Fontana] a couple of times, and he just said, “This is the guy.” When you cast someone like that, this really interesting combination of someone who can really hold the stage, a person who’s a really good actor, it just elevates your game.

How did the collaboration with Robert Horn work?

This collaboration is a version of how you should always do it if you can. Once he was hired, we just started talking through the tone – which is a massive first thing you have to get right. Then we just had endless hours of conversation about what the show-within-the-show should be, how that should work, which characters should be consolidated or not. It’s all about knowing you’re writing the same show. I had already written four or five songs in an earlier incarnation, and that gave him an idea of where my head was at. And then it started melding together.

That’s not really accurate. Another way this is like “The Full Monty” is that it’s an eclectic score. Hopefully you can always tell that it’s one guy writing it all. But I have a lot of musical interests, and I’m comfortable in a lot of different styles and genres. So jazz will always find its way in there, but it’s a word that means something slightly different when you’re talking about Broadway. There’s all kinds of stuff – there’s funk, and there’s definitely rock influence, and pop. It’s all over the place. It’s the music suiting the moment – that’s how I work. Groove and melody are the kings of this particular score.

There was a critical consensus in Chicago that the last few minutes of the show needed fixing.

We worked a lot on the last ten minutes of the show. We knew we were 95 percent or 90 percent [there]. That’s so much better than, “Oh, shit, the whole second act is falling apart.” It’s all about getting you to the end in a way that’s satisfying but also that doesn’t belie the tone of the rest of the show. I think we’re there, but who knows? We’ll go into rehearsal and we’ll see, and then we’ll go into previews, and the whole time we’ll still be looking at it.

Like “The Band’s Visit,” isn’t this in some sense a show about human connection?

It totally is. But the tone that it works in is just pure comedy, rooted in something real. The thing that it shares with “The Band’s Visit,” and that I’d like to think that all my shows have, is a sense of authenticity. Every laugh is earned. That’s always been my desired type of comedy. That sense of an underlying truth is very important to me.

It was really fun for me to go back to channeling my comedy heroes, who happen to be Jewish. Allan Sherman has a massive influence on me as a comedian and as a lyricist. American humor to such a large extent is Jewish humor. Most of the great Tin Pan Alley writers were Jewish. While I was writing this, I really felt a connection to those guys, especially someone like Frank Loesser, who was the king of rooting comedy and entertainment in some sense of reality.

Can ‘Tootsie’ Turn Men Into Mensches In The #MeToo Era?