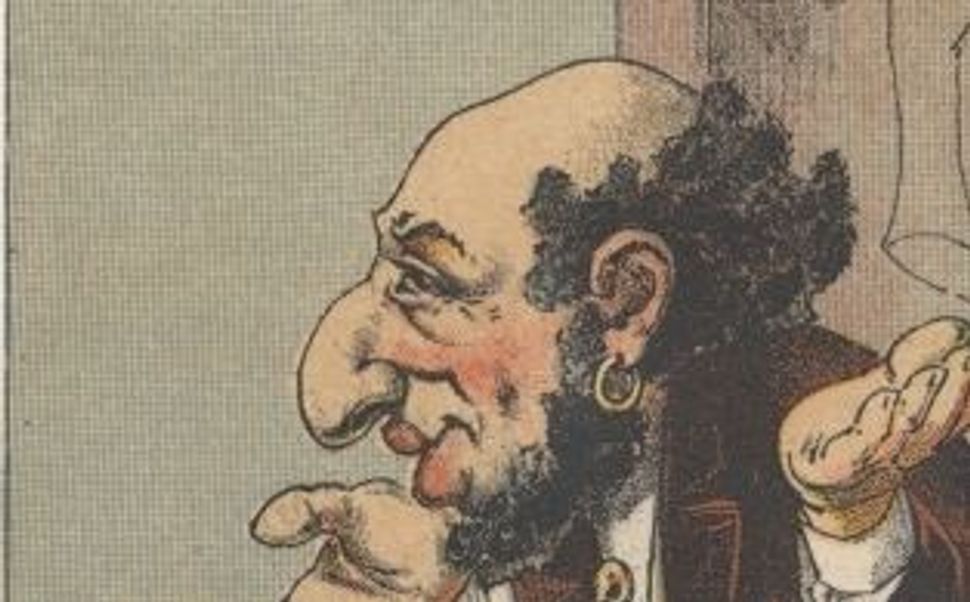 An anti-Semitic Victorian caricature of a Jew. Image by Wikimedia Commons

The superintendent of Fairfax County Public Schools in Virginia has publicly apologized for a student drawing that many deemed anti-Semitic.

The picture, displayed at Northern Virginia Community College’s Annandale campus between February 14 and March 14, was one of eight drawings made by a 17-year-old high school student as part of a series titled “Racial Irony.” A panel of judges from the Scholastic Art & Writing Awards recognized the series with “silver key,” allowing the student to display one selection from the portfolio as part of an exhibit of the honorees. Of the drawings, the student picked a piece titled “Jewish People,” which shows a hook-nosed man with a bag of money, a kippah and sidelocks.

A Fairfax Co. high school student’s award winning artwork is being called anti-Semitic and has led to an apology from the superintendent.
But the student’s art teacher told a concerned rabbi he was “vilifying” her & the student.
Story on @ABC7News at 11. pic.twitter.com/6g3Aw3e5bN

Fairfax Schools Superintendent Mike Braband apologized to the community in a letter posted to the district’s website on March 28, The Washington Post reported Sunday.

“I want to extend an apology to you,” Brabrand wrote in the letter. “I understand how, out of context, this piece of art was offensive to you in that it appears to portray Jewish individuals in a negative light.… It is my understanding that it was not the intent of the artist to offend anyone.”

Brabrand stated that as a result of the controversy the district would reevaluate its submission process for the Scholastic Art & Writing Awards. According to the letter, the student had written a statement explaining her satirical purpose that was not on view at the exhibition. Brabrand included the artist’s statement in his online apology.

“I want people to understand the effects or stereotypes and why it’s important to see the tragedy in it,” the statement read. “Stereotypes are what they are: an over-generalized pre-conceived notion of a group of people. I also wanted to show its ignorance and the effect it has made on the people behind those stereotypes.”

Braband apologized previously for the artwork’s public display after a rabbi, who asked to remain anonymous, emailed the student’s teacher, Justyne Fischer, calling the drawing “an example of bigotry and anti-Semitism.”

Fischer responded to the rabbi by writing “My student is using her freedom of artistic expression to respond to a president who calls Mexicans ‘rapists’ African countries ‘Shit Hole Countries’ and White Supremacists, ‘Very Fine People’. She chose to create a portfolio of eight works which are ANTI stereotype.”

Braband’s apology to the rabbi, sent by email and quoted by local ABC affiliate WJLA, uses much of the same language as the open letter posted to the district website. In it, Brabrand pledged to work with the district’s art teachers to reinforce “the need for cultural awareness and responsiveness along with the importance of emphasizing those skills with their students.”

“We have to be really careful when we’re using satire,” Rabbi Shmuel Herzfeld of Ohev Sholom synagogue in Washington, D.C. told The Washington Post. “Everyone’s intent here was good, but there’s a sensitive conversation to be had.”