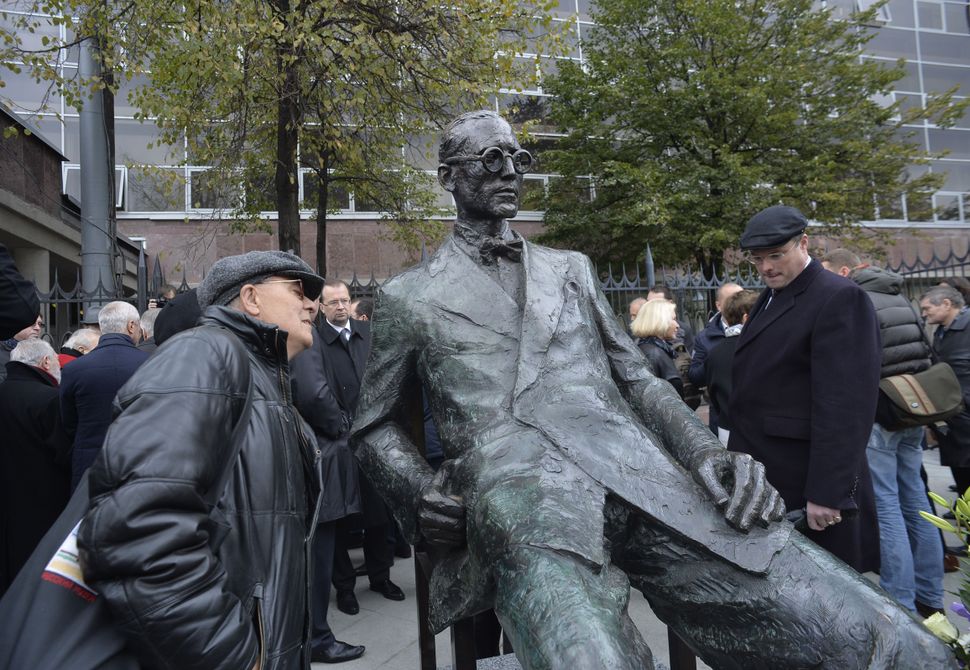 A statue of Charles-Édouard Jeanneret, aka Le Corbusier Image by Getty Images

“I am quite simple, even transparent. It’s the events swirling around me that are twisted.” When he wrote these words late in life to a friend, the world-renowned architect Charles-Édouard Jeanneret, better known as Le Corbusier, seemed to anticipate the controversies that his revolutionary ideas and crowded life would eventually inspire. In light of a bitter controversy now unfolding in France over plans for a museum dedicated to his oeuvre, Le Corbusier’s self-description appears not only accurate, but ironic.

Few architects better embody this claim than Le Corbusier. Born in Switzerland in 1887, Le Corbusier idealized — like his fellow Swiss, the philosopher Jean-Jacques Rousseau — the artisanal communities in which they had been raised. But the intervening century of seismic social and technological changes persuaded Le Corbusier this world was not just dying, but already dead. As he wrote in his journal: “Others stood indifferent—but you saw!” 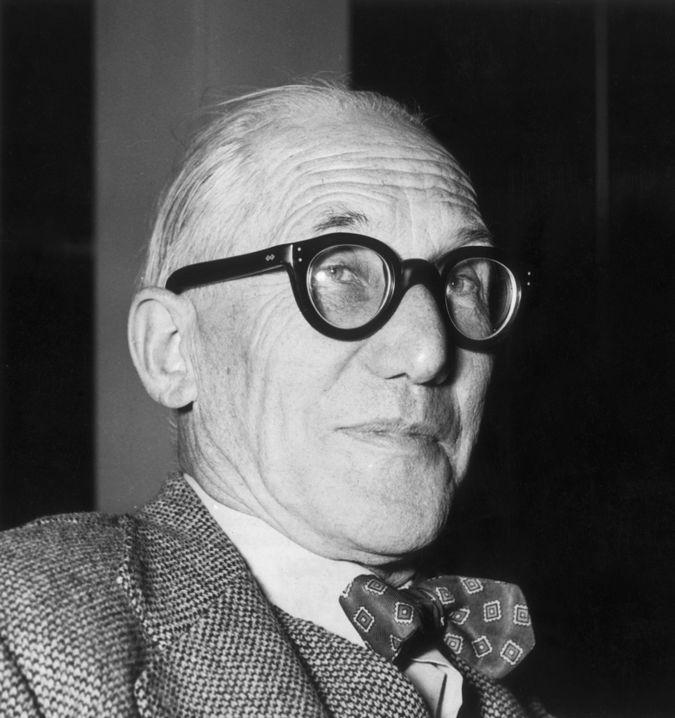 Seeing is not just believing, but then acting on those beliefs. Le Corbusier insisted that “all art must have as its ultimate aim the regeneration of society.” In a way, Le Corbusier was not all that exceptional in this belief. Paradoxically, the physical and psychological wasteland wrought by the Great War proved fertile soil for such convictions. What did make Le Corbusier exceptional, however, was his conviction that the architect must play a leading role in this act of regeneration. Rather than designing new façades for this decayed world, architects were called upon to redesign all of society from the ground up.

Fresh from his studies in Switzerland, the ambitious young man packed his bag, picked a new name, and headed west — to Paris, of course. He was awed, and appalled, by the city. Even with the wide boulevards and vast traffic circles, Paris’s traffic arteries were increasingly congested, its eastern neighborhoods increasingly dense, and its prospects at overcoming this state of affairs increasingly grim. Paris was being destroyed, Le Corbusier wrote, by the “very tools that might save it.” The Age of the Machine had arrived, and if Paris did not master the machines, the machines would master Paris.

In short, Paris had to be razed in order to be saved. When told by a group of city officials that urbanism meant prettifying the streets with art, Le Corbusier shrugged in disdain: “Fine, I shall design a great fountain and behind it place a city for three million people.” He devoted the interwar period to creating models for new cities, most famously his “ville radieuse” or “radiant city.” Based on a grid as rigid as a steel-link fence, the radiant city bristles with towering high rises that, by housing the entire population, free the ground for green spaces. “Imagine all this junk,” Le Corbusier boasted, “which till now has lain spread out over the soil like a dry crust, cleaned off and carted away and replaced by immense clear crystals of glass.”

Remarkably, Le Corbusier failed to imagine that what he called “junk” others called “home.” More remarkably, he failed to see the irony that, in order to free public spaces, he limited public freedoms, now overseen by a ruling elite of technocrats. This failure of moral imagination darkens the so-called Athens Charter, a document Le Corbusier penned that lambasted what he called the “narrow-minded cult of the past.” Preoccupied by public order and hygiene, Le Corbusier advocated the construction of massive housing projects to replace the “diseased” quarters of cities.

The Charter’s dreary spirit squats over the postwar housing developments across Europe and even the United States, where soul-numbing clusters of bleak apartment blocks are strewn along the outskirts of cities, vectors of the same urban pathologies, ranging from crime to anomie, they were meant to cure. Tellingly, Le Corbusier published the Charter in 1943 in order to win over the collaborationist and anti-Semitic Vichy regime to his grand schemes. This effort failed; unlike Nazi Germany, Fascist Italy, or Communist Russia, Vichy had neither the material means nor totalitarian temper to undertake such a project.

But it was not for want of trying on Le Corbusier’s part, and this leads to the current controversy over his legacy. During the interwar period, and even more so under Vichy, regeneration rhymed in all sorts of dire ways with degeneration. Not only were cities viewed as a breeding ground for disease and disorder, but also as a magnet for immigrants and refugees whose indelible otherness threatened the purity of French identity. More so than any other people, the Jews embodied this mortal threat to the nation, leading to Vichy’s promulgation of a battery of anti-Jewish laws soon after it came to power.

Architectural historians have long known about Le Corbusier’s attempts to win over Vichy officials. They have tended to explain this behavior by noting the professional predicament of the architect — or, at least, Le Corbusier’s portrayal of the architect. Whereas artists could continue to paint or sculpt in the privacy of their studios, the canvases or pedestals for architects were, in effect, public. The American architect Philip Johnson famously described himself as a “whore,” taking his commissions where he could get them. While Le Corbusier never said he was a “pute,” he did insist that “only power can make the plan a reality, and only unobstructed power can realize a work of perfect order and truth.”

What historians did not know, at least until the recent publication of Le Corbusier’s correspondence, was his soft spot for totalitarian regimes like Nazi Germany and his scorn for Jews. (Curiously, Johnson not only shared these sentiments, but also shared the same weakness for goggle-shaped eyeglasses.) While France was still reeling from the German invasion, Le Corbusier welcomed the defeat. “If we had won militarily,” he wrote to his mother, “all that is rotten and putrefied would have triumphed, and nothing pure and clean would ever again have been able to live.” A few weeks later, just in case his mother missed the allusion to rot and putrefaction, he declared: “Just laws will be imposed on money, Jews (partly responsible), and Freemasons.” As for the significance of Germany’s victory, Le Corbusier was as crystal clear as his precious towers: “Hitler can crown his life by a great accomplishment: the planning of Europe.”

A recent salvo of books in France, including works by Xavier de Jarcy and Marc Perelman, not only detail Le Corbusier’s activities during the Occupation, but also suggest the architect’s aesthetic is tinged by a totalitarian sensibility. Take Le Corbusier’s celebrated unité d’habitation in Marseilles. Emphasizing the architect’s ideal that a house “is a machine for living,” Perelman dwells on the overwhelming effect of passers-by of these “immense envelopes of bare concrete, suspended above the ground by massive pillars that exercise inescapable pressure on the senses.” No matter how brightly you color the façade, the building remains, in every sense of the word, brutal.

It turns out Perelman is one of several signatories to a letter published last week in France’s newspaper of record, Le Monde, protesting the creation of the Musée Le Corbusier. The letter urges the Ministry of Culture not to “make itself complicit in the rehabilitation of a man who celebrated France’s defeat in June 1940 and joined the collaborationist regime of Marshal Pétain.” Denouncing his ideal city as a place to “train and enslave” human beings, the letter concludes that while everyone has the right to have their own opinion on Le Corbusier, no one has the right to have their own facts.

Regardless of the government’s ultimate response, “l’affaire Corbu” will not end any time soon. The issues are far more complex than either side in this debate seems to accept. For now, the one lesson to be drawn is how Le Corbusier’s simple ideas could lead to such terrifying and twisted ends.