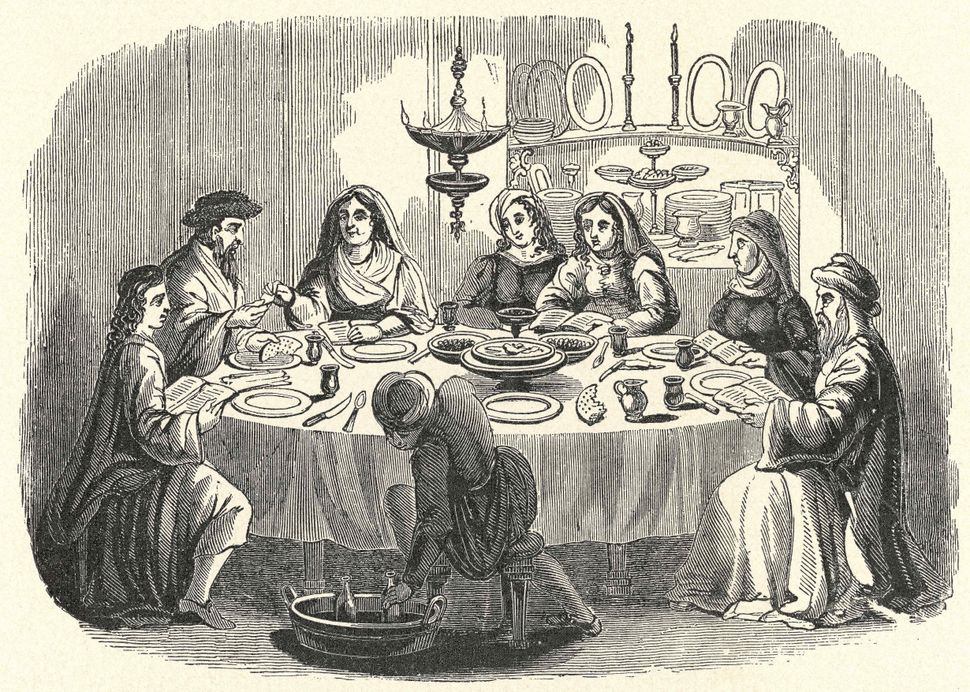 The Passover Feast, Circa 1800 Image by Getty Images

In a matter of days, Jews around the world will erupt in the familiar, if irritating, tune of “Dayenu.” Maybe that chorus, a strident battery of notes that sound wrong even when they’re hit right, can explain how the title of a song meant to inspire gratitude has been co-opted into the Yiddish canon of lament.

“Dayenu,” we’ll say, as in, “Enough already!” It’s an utterance of despair spoken as an aside, a Borscht-belt punch line, a chaser to oy vey. So that rather than recall the notion that any one of God’s blessings would have been enough, we tend to utter “Dayenu” as if to say, “Haven’t we suffered enough?”

Perhaps hardship is so ingrained in our Jewish DNA that we instinctively summon what’s lacking. Or it’s simply human nature to seek out what’s missing, what’s wrong with the picture, who else has more. Or, it’s the cultural drive toward achievement, acquisition and perfectionism that have us feeling entitled to a mirage or something that, should we have it, might leave us even emptier than before.

Inside my pretty home office, with its French doors — I’ve always wanted French doors — and a view of graceful old trees, my focus lands instead on my bookshelves, teeming with books I haven’t begun or completed. My to-do list wags its finger at me. So while I’m at it, I consider the photos busting out of storage capacity on my devices, reminding me to print and catalog these days. And I’m soon distracted by the search for the perfect cabinet to store the photos and souvenirs from a disappointing vacation stuffed in a shoebox by my bed.

Suddenly, I wonder if my home will ever feel right enough, the way my grandparents’ did, with thick rugs and interesting wallpaper and the smell of soul-satisfying food. And when will I be enough? When will I have produced, documented, helped, written and shared enough?

When we look back, we will think how good we look now, how thin, how much ruddier the cheeks and fuller the breasts. We know we should have enjoyed it. If only we could look forward on looking back and come back to where we are.

Were it not for my son, a nearly three-year-old joy-being entranced by basically everything, I might miss the glaring abundance around us.

Each day with him is like a choose-your-own-adventure story, embarking on a thrilling mission to explore the site of his birthday party or to find the flowers his teacher talked about on our spring walk. “Is that a (for)sythia bush? Wow!” he marvels in jubilation. “Now we must find a sythia tree!” I think they’re the same thing, but I’ve only just learned about these golden ray-like plants from him, and I’d never dampen his enthusiasm. For days, we’ve sought out daffodils and violets and congratulated each other on finding them in neat rows of our neighbors’ yards and lining the curb at the shopping mall and fire station.

Lately, he has reveled in the release of stretching his legs, revered the news that two colors combine to form another and rejoiced in the sound of a new word. A boy named Zachary shouted “boo-ya!” at Shabbat services, and he found the particular inflection and syllabic mash-up so hysterical that he’s repeated it endlessly; the more he says it, the funnier it feels in his mouth. Saying “boo-ya” for now, anyway, guarantees a giggle and a laugh so hard he can hardly muster the breath to repeat it.

In his world, our work is to play and learn and help, to make a mess and clean it up. We don’t much consider time past or ahead, except for the long minutes leading up to a play date or before bed, when we discuss what happened that day, the Peruvian chicken he devoured or the new neighbor we met. He feels so satisfied with the day’s review. And we feel free and alive in these moments.

So, perhaps this Passover, we could reconsider Dayenu by starting with gratitude for the simplest pleasures. We could think about everything we have that’s extra, all the unexpected gifts, so that our cup brims so full we can’t help but feel energized and grateful and eager to give.

If we can feel the sun on our back and the breeze on our face, it would be enough.

If we have a place to work, but didn’t get the windowed office, that would be enough.

If we wake up in a free country, it would be enough.

If we enjoy the solace and confidence of a single friend, it would be enough.

If we are blessed with one child instead of two, it would be enough.

If we face cancer but can access life-extending drugs, is that enough?

If we enjoy one good day, instead of slogging through five, it would be enough.

And if we make an imprint on one person, who, in turn, heals another, that is more than enough.

At night, when my son and I discuss the day, we’ll feel content that we played and ate and delighted in new socks with cars on them, and that was it. It is enough.