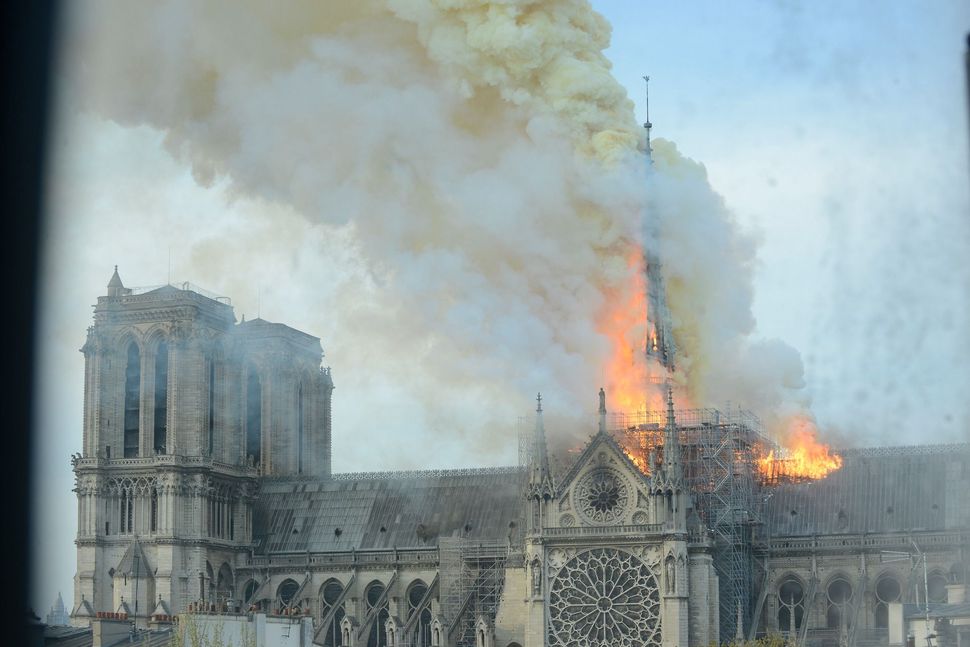 In early 1981, Pope John Paul II announced his choice as the new Archbishop of Paris, Jean-Marie Lustiger. Not only did Lustiger share the pope’s youth and dynamism, but he apparently shared his ethnic background. Lustiger was, in fact, widely (and not always kindly) known as “the Pole”—a reference to his parental heritage. Upon being named as archbishop of Notre Dame, however, Lustiger corrected (and not for the first time) the epithet.

“I was,” he declared, “a Jew and the child of immigrants.”

This story of a Catholic prelate who began life as the child of Jewish immigrants to France is worth recalling while we take stock of the fire that ravaged Notre-Dame last night. The cathedral was Lustiger’s official residence for the last two decades of the 20th century and his presence there, as he gladly admitted, was a “provocation.” Not only did Lustiger’s presence in France’s most famous cathedral annoyed more than a few Catholic traditionalists, but it also anguished a number of Jewish traditionalists. For the former, Lustiger was forever a Jew, while for the latter he was forever a pariah.

In 1942, during the German occupation of France, the future archbishop’s mother was arrested by French police during a round-up of foreign and French Jews. Gisèle-Léa Lustiger was imprisoned at the camp of Drancy; after several months, she was led onto a train with several hundred other French and foreign Jews, delivered to Auschwitz and promptly murdered. Her name is among the more than 70,000 listed by Serge Klarsfeld in his Mémorial des juifs de France—a work that Archbishop Lustiger often referred to as his bedside book. “A part of me,” he would tell visitors, “is in this book.”

Gisèle-Léa Lustiger’s name is inscribed, as well, on the somber wall at the Shoah Memorial. The Memorial, it so happens, is located more or less in the cathedral’s backyard on the eastern tip of Ile-de-la-Cité. This is precisely how Lustiger would have wished it to be. The cathedral and grounds of Notre Dame was the ideal setting for a man of seeming contradictions. After all, the massive building is itself an architectural contradiction. Begun in the mid-12th century and completed in the mid-13th century, the cathedral’s construction spans not just two centuries, but also two distinct styles. First conceived in the Romanesque style by its anonymous architects, their successors added Gothic principles to the mix. It is stolid and stout in places, while it soars and spirals in others.

In effect, Notre-Dame is something of a crossbreed.

Paradoxically, no site is more closely identified with France than this monument of mixed parentage. (Those who claim the Eiffel Tower earns this honor confuse the nation’s capital with the nation itself. Gustave Eiffel’s engineering feat is, well, Parisian, while Notre Dame is, quite simply, not just French, but France itself.)

It is the cathedral’s sublimity—the way it envelops and contains contradictions—that should now be invoked. Last night, Twitter and television carried message after message about Notre Dame from French politicians of all religious and political stripes. As the messages of commitment to rebuilding the cathedral came in, what the world took out was the reminder of the cathedral’s remarkable capacity to include and not exclude, to represent the nation, not a religion.

We need go no further back than one signal event during Lustiger’s youth. On August 26, 1944, General Charles de Gaulle marched triumphantly from the Arc de Triomphe to Notre Dame, leading a long and motley cortège of those who had fought for France’s liberation. Inside the cathedral, while sniper shots still echoed across the nave, members of both the Resistance movements and Free French Forces, Christian and Jewish, believers and non-believers, listened in silence to the playing of the Te Deum. he cathedral was no longer As the hymn was peformed, the cathedral—literally the “seat” for the Catholic Church—became instead the seat for the nation, for all Frenchmen and women, regardless of their religious background.

When the fire is finally extinguished, the cathedral’s roof repaired and its spire rebuilt, it will no doubt be reopened to the strains of another Te Deum. As in 1944, all of France will be in attendance. Fires come and go, but Notre Dame remains.