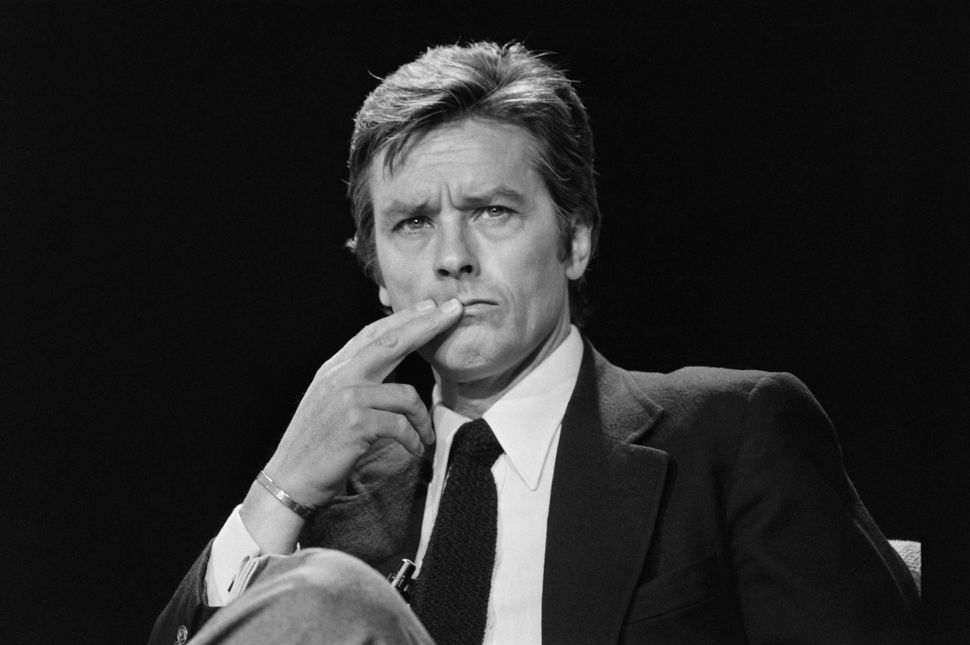 This year’s Cannes Film Festival, starting May 14, will honor the French film star Alain Delon with a Palme d’honneur prize for acting, a lifetime achievement award that has previously gone to such performers as Jeanne Moreau, Catherine Deneuve, and Jean-Paul Belmondo. Delon, now 83, has played a hired killer in “The Samurai” (1967) directed by the French Jewish filmmaker Jean-Pierre Melville (born Grumbach) and an art dealer in Joseph Losey’s “Monsieur Klein (1976) a drama about the Nazi Occupation of France. None of his roles has surprised fans more than Delon’s long-evolving status as a supporter of France’s ultra-right wing National Front movement, associated with anti-Semitism by many experts on European politics.

Delon relocated to Switzerland over three decades ago for tax reasons and acquired Swiss citizenship 20 years ago. He has long spent more time in international business deals than in making films in his homeland. Yet he continues to freely provide critiques of French politics. In 1987, Delon told French TV viewers that the notorious National Front leader Jean-Marie Le Pen, who has been tried and convicted for Holocaust denying statements, including that Nazi gas chambers were a mere “detail” of history, was his “longtime friend.” Delon added: “I am very supportive of Mr. Le Pen, that’s all there is to it.”

It turned out there was more to it, since in October 2013, Delon further told the Swiss daily Le Matin, that the National Front’s rise in power and influence was “very edifying.” Le Pen’s party, according to Delon, was “taking a very important position [in France] and I approve that, I encourage that, and understand it perfectly well… For the first time, the French people are with [Le Pen and his daughter Marine, the current National Front leader].” In reaction to this and other statements by Delon, the Miss France national beauty pageant, which had previously named Delon as its lifetime honorary president, issued a press release dissociating itself from his political views. Delon responded by resigning his lifetime honorary presidency.

What a beauty pageant could not stomach, the Cannes Film Festival has embraced and will be lauding. One of the ironies of the prize offered to Delon is that the Cannes Film Festival itself was founded on the initiative of Jean Zay (1904-1944), a French Jewish Minister of National Education and Fine Arts who would be murdered by a French Nazi militia during the German Occupation. And for almost 40 years, a prominent director of the Cannes Film Festival was the French Jewish administrator Gilles Jacob. Retiring in 2014, Jacob was ousted from the festival’s administrative council last year in a surprising move by current directors. In a book published last year, “An Amorous Dictionary of the Cannes Festival,” Jacob included lavish descriptions of many of the notables he had encountered over decades in Cannes, from Lillian Gish to Madonna. In over 800 pages of Jacob’s memories, there is not a single mention of Alain Delon.

Yet Jacob had reason to recall Delon, since the latter made his pique known in 1997 when on the occasion of the Cannes Festival’s 50th anniversary, Delon was somehow not officially invited to participate in the celebrations. Infuriated, Delon vowed never to “set foot” in the festival again. He kept his promise for 15 years, finally capitulating when Jacob scheduled a special honor for Delon during the 2013 festival. As Jacob told Nice-Matin newspaper in May 2013 with some degree of irony, possibly alluding to the actor’s sense of self-importance, “If Alain Delon phones you and says ‘Hello, it’s Alain,’ it would be in your best interest not to reply, ‘Alain who?’”

The question of who Delon really is continues to puzzle some of his compatriots. In 2013, Delon’s son Anthony, upon hearing of his father’s statement of support for the National Front, reacted in a text message about his father that was reprinted widely in the French media: “It’s appalling! He’s an actor. He would do better to make films and present us with an end of life like that of Clint Eastwood, rather than become an off the cuff political commentator.” To which Delon replied on Radio Télévision Suisse, advising his son to “clam up.” (la fermer)

Delon’s son was not the only one in France’s entertainment world to protest. The actor and director Charles Berling, who won plaudits for a theatrical adaptation of a memoir by a Jewish policeman in the Otwock Ghetto of Nazi-occcupied Poland, was among them. In October 2013, Berling told Nice-Matin: “Alain Delon has always been someone of the far-right wing… Delon and his words are awful…He is a fabulous actor, but not always a great thinker.” The French Jewish actor Richard Berry (born Richard Élie Benguigui) concurred, telling Radio France in October 2013 that in politics, Delon was “no authority!” Berry added: “In political matters, his words have no importance for me, unsurprisingly. It’s like when Brigitte Bardot talks about politics. [Delon’s] statements follow the rationale of [Bardot’s’].”

Others also link Delon to Brigitte Bardot, as the two most prominent French movie stars to overtly support the National Front, as well as implicitly as two former beauties who have aged disappointingly. Bardot, now 84, like Delon also achieved early fame in the 1960s, yet she retired from the film industry as early as 1973. Gilles Jacob devotes an especially lengthy chapter to Bardot in his “Amorous Dictionary,” but his flattering account ends discreetly with her retirement year of 1973. After that, Bardot married a former adviser of the National Front and has been fined five times by French courts for inciting racial hatred. Twenty years ago, in a memoir, Bardot complained that France had been “again invaded by an overpopulation of foreigners, especially Muslims.” In another book fifteen years ago, Bardot called Muslim immigrants in France a “subterranean, dangerous, and uncontrolled infiltration.” In August 2014, she informed “Paris Match” that Marine Le Pen is the “Joan of Arc of the 21st century.”

The Cannes Festival would be unlikely to honor Bardot at this point, so why are they vaunting Delon, who shares many of her political views? Could it be that a man supporting the National Front somehow offends the festival directors less than a woman with the same attitudes? While Bardot has long distanced herself from the French entertainment world, Delon still plays a visible role. He also continues to emit commentaries, as in October 2015, when he applauded Nadine Morano, a National Front deputy to the European Parliament, who had declared on French TV that France was a “country for the white race.” Using a French slang term for testicles, Delon praised Morano’s fortitude in expressing her opinions and sticking to them. Will the current directors of the Cannes Film Festival demonstrate comparable fortitude and reconsider their decision to honor a vocal supporter of France’s National Front?