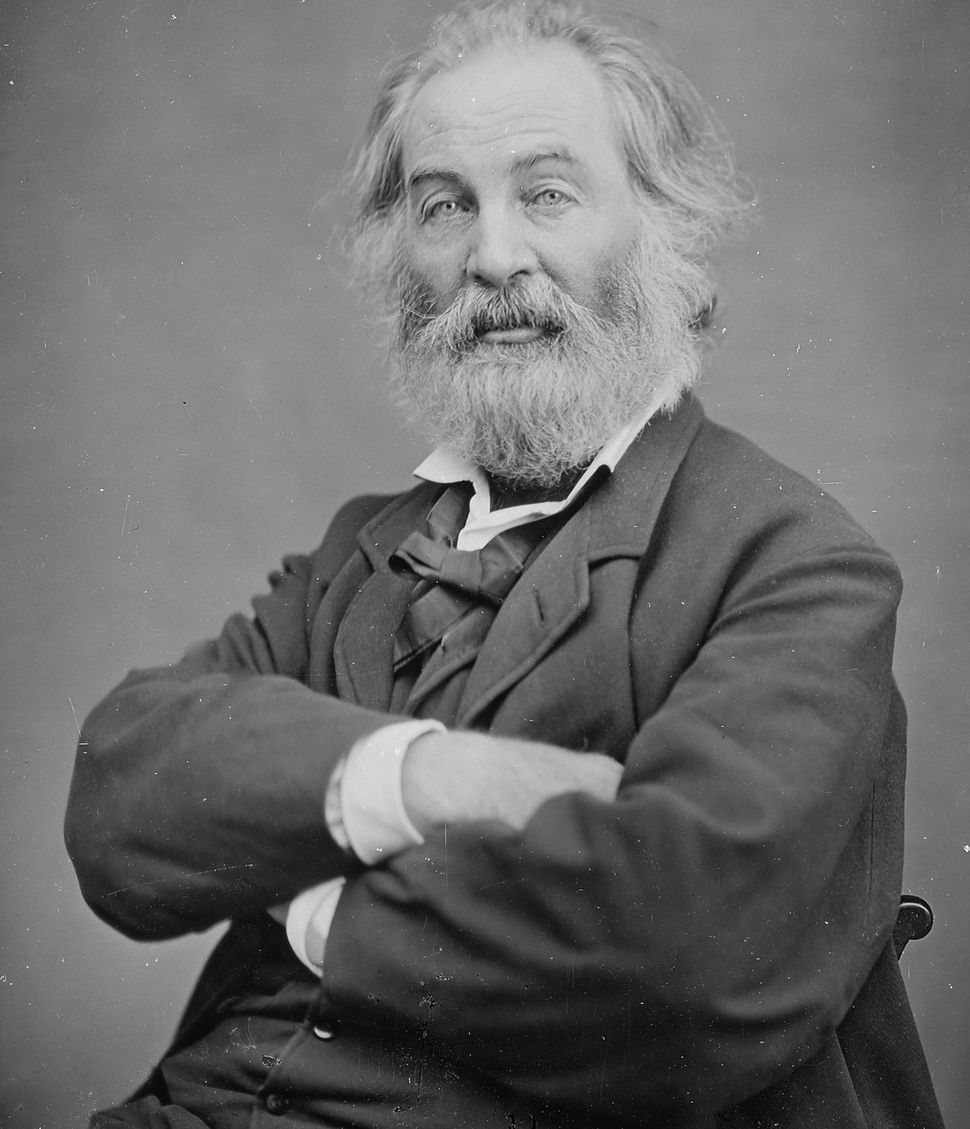 The poet Walt Whitman, whose bicentenary is on May 31, found universal inspiration in all Americans, including Jews. As a young journalist and newspaper editor in March 1842, he wrote in “The New York Aurora” under the headline “The More the Merrier”:
“Our Jewish citizens have lately taken quite a fancy to The Aurora. They pay us the compliment of saying that they consider it the best publication in the city. Were it not that people would cry ‘tit for tat,’ we should say what we certainly think, that this good taste is worthy all commendation.”

In the same periodical the previous day, Whitman had recounted his visit to the Crosby Street Synagogue, a downtown shul, opened by the pioneering Congregation Shearith Israel, that would close less than two decades later: “For the first time in our life, we went, on Saturday morning last, to spend an hour in a Jewish synagogue.”

Reflecting upon biblical precedents, Whitman likened the sound of spoken Hebrew to the “same tones as those which at night bade the shepherds to follow the guidance of the star in the east – the same tones which Jonathan and Saul used in their beautiful friendship – which sounded out from the plaintive Hagar in the wilderness – through which Absalom, ‘that too beauteous boy,’ made rebellion against his father – with which the widow’s son, who was dead, and brought to life again, gladdened his desolate mother’s heart; – the tones and the native language of the holy Psalmist, the lovely Rebecca of [Walter] Scott, and the malignant Shylock of Shakespeare.”

Whitman’s synagogue visit inspired in him a “thrilling sensation to creep through every nerve,” and in a follow-up article, he identified among the worshipers his former employer, the publisher [Mordecai Manuel Noah (1785-1851). (https://www.amazon.com/Jacksonian-Jew-Worlds-Mordecai-Noah/dp/0841905673/?tag=thefor03-20) Decades later, in August 1890, Whitman would exclaim to a friend: “I remember Col. Noah, in New York – it was long ago – I knew him well, intimately, even. He was a Jew – oh! – a Jew of the Israelites! possessing the grand virtues we read of in Old Testament characters – fraternal feeling, kindness, generosity, love of domestic life. He was a marked man in all these features—a character indeed. I remember at a meeting, he got up and said – ‘Ah! my friends, we must not forget that a little license is the very salt of liberty!’ – it was a profound thing, and he was capable of it and more like it!”

As an invalid retired to New Jersey, Whitman conveyed this live-and-let-live attitude to his caretaker Horace Traubel (1858–1919), of German Jewish origin. Traubel’s nine-volume published record of Whitman’s conversation has recently been excerpted in a Library of America book, following a previous selection by Whitman biographer ‎Gary Schmidgall Traubel persuaded Dr. Daniel Longaker of the Jewish Maternity Hospital to treat Whitman, then living in Camden, on a pro bono basis, as biographers Gay Wilson Allen and David Reynolds recount. In 1947, Dr. Longaker would organize a Tribute to Jewish Youth banquet in Philadelphia to honor the left-wing American Jewish novelist Howard Fast.

For Traubel, Whitman was a prototypical leftist of this ilk. In September 1888, he passed along two dollars for a publication by Whitman from a Jewish friend who “had trouble with Orthodox Jews because of his radical ideas.” To which Whitman replied about the purchaser: “If that’s the kind of fellow he is, he must be one of us.” Traubel also encouraged the sons of his brother-in-law Dr. Morris Lychenheim, to read Whitman. In July 1889, when Traubel announced to Whitman that his nephews wanted to buy his books, Whitman asked: “Hebrews?” Traubel affirmed that they were Jewish, and Whitman remarked: “If I keep on in this way I shall by and by have a Hebrew clientage—and I do not see why I should not – I see every reason why I should: for am I not a Biblical fellow myself – born and bred in Hebrewism – the old forerunners, teachers, prophets?… And all my Hebrew friends are turning out to be among the young – you would call that an omen, wouldn’t you?”

In August 1889, Whitman, an admirer of the French biblical scholar Ernest Renan, asked Traubel: “And Renan—he is of Jewish stock? It has often caused me to think, how much of the great French literature – of French greatness – comes of Hebraic sources – the German, too, for the matter of that!”

Traubel also discussed with him the anti-Semitic pogroms being perpetrated in Russia. In December 1891, Whitman challenged a visitor who tried to rationalize the violence, by demanding: “What are your observations on the Russian question, the cruel barbarous treatment of the Jews in Russia?”

Jewish tradition was freely alluded to in Whitman’s writings amidst other world culture, citing the “Talmud of the Jews” in “Democratic Vistas,” where he also states that poets should be “possess’d of the religious fire and abandon of Isaiah.” Whitman saw his personal role as poet and prophet following the Hebrew precedent, although with progressive aspects. As he told Traubel in February 1889, “We are getting beyond some of the old asininities – all of us, Catholics, Protestants, Jews, alike: we can’t hold the world any longer to the old weights and measures.”

His tolerant, open-minded inclusiveness may have been partly inherited from his mother, Louisa Van Velsor Whitman, who wrote to Whitman in July 1868 from Brooklyn in quirky style: “We have got a jew family below at present they keep tobacco and [cigars] he is a tailor works in new york they are from savannah they are very clever to me and clean talk [dutch] all the time.”

By describing what was likely Yiddish as “Dutch,” Whitman’s mother allied the Jewish neighbors to her own family, proud of its Dutch ancestry. More typical of the casual anti-Semitism of Whitman’s time was his brother, Civil War combatant George Washington Whitman who wrote to Whitman in February 1863, fretting that the Union Army might “jew” him out of a scheduled furlough.

More venomous were the attacks on Traubel after Whitman’s death by another disciple, the journalist William Sloane Kennedy, who in 1908 decried Traubel as an “ill-mannered little monster of a German Jew who served him as secretary in betraying this private & confidential conversation of his closet to the world with a blare of trumpets.” Kennedy even suggested that Whitman probably would have “desired to have [Traubel] privately shot if he had known what he was going to do after [Whitman’s] death.” In 1924, Kennedy repeated similar sentiments in a book-length tribute to the naturalist John Burroughs, denouncing the “little German Jew of Camden” for his “spyings.”

Happily, early Whitman reviewers and disciples were likelier to agree with William Michael Rossetti, cofounder of the Pre-Raphaelite movement, who praised Whitman’s poems in the “London Chronicle” in July 1867 as “echoing the old Hebrew poetry.” Multiple early critics pointed to this reflection of the Hebrew prophets in Whitman’s expansive apostrophes to the world, expressions of the longstanding mutual fascination between Whitman and Jewish readers.