No Gefilte Here, But There’s Plenty Jewish At The First Academic Conference On Phish 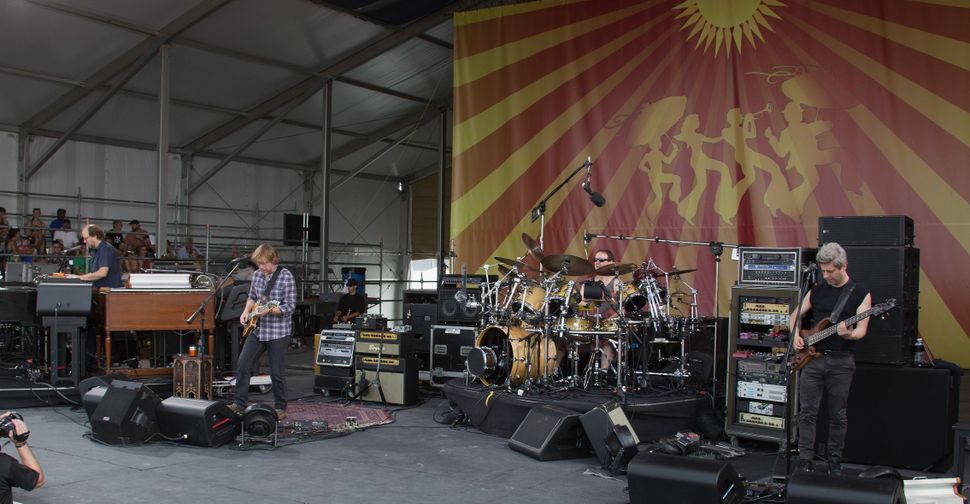 Begining Friday, May 17, Oregon State University will host the first ever academic conference on the jam band Phish, a rock quartet formed at Vermont’s Goddard College and known for its virtuosic improvisation, legendary concerts and devoted following. One of the panels will be devoted exclusively to Phish and the Jews.

What’s Jewish about Phish? To begin with, there are two Jewish members, bassist Mike Gordon and drummer Jon Fishman. The band can also proudly boast of a namesake Ben and Jerry’s flavor, and a young Matisyahu followed them on tour in his pre-rap days. But however toothsome the ice cream, those bona fides are all superficial. For many of Phish’s Jewish fans, both devout and nonobservant, the band plays a large role in individual spiritual development.

“People who are seeking something and find it at Phish are totally aware that one of the things that makes them feel fulfilled spiritually at Phish is that they become part of something that is greater than themselves,” Oren Kroll-Zeldin, the Assistant Director of the University of San Francisco’s Swig Program in Jewish Studies and Social Justice told the Forward. “The energy in the room is quite intense. The lights go on people and it really feels like this deep spiritual sea of human energy and emotion that people connect to.”

Kroll-Zeldin is presenting his paper, “‘We’re All Here Together in this Spirit Family’: Phish and the Cultivation of Jewish Cultural Identity in the Twenty-First Century” as part of the conference’s panel “People of the (Helping Friendly) Book: Jews, Judaism, and Phish.” His research was taken from in-depth interviews with Phishheads, including Josh Fleet, the operator of the Twitter account PhishTalmud and creator of the Phish Haggadah.

While some of Kroll-Zeldin’s subjects found a spiritual aid in Phish where traditional Jewish organizations failed to deliver, one of his co-panelists learned that Phish guided many rabbis to their pulpits.

“Rabbis told me ‘I try to make the community that I run in my synagogue feel and look more like a Phish community,’” said Rabbi Joshua Ladon, West Coast Director of Education for Shalom Hartman Institute of North America, whose paper “Does God Ever Listen to What I Say?: The Role of Phish in Jewish Clergy Spiritual Development,” focuses on rabbinical responses to Phish. “That’s profound to me.”

Ladon, like all the panelists, reports that he first encountered Phish at Jewish summer camp via college-aged counselors bearing bootleg tapes. The transmission made demographic sense, since Phish began their career on liberal arts campuses in the northeast, where there was a high percentage of Jews relative to the national population. Most of the respondents to Ladon’s survey were between the ages of 35 and 45, putting their adolescence right in the middle of the band’s early days in the 1980s or at their peak in the 1990s, when Ladon and the rest of his bunk of 15-year-olds were escorted to a concert under the guise of Jewish summer camp.

This bears out with the research of musicologist Jacob A. Cohen, one of the organizers of the conference who is also on the panel. In the process of coordinating the speakers, Cohen realized that he knew Ladon from Camp Avoda in Middlebury, Massachusetts – ground zero for his own Phish fandom.

Cohen’s paper focuses on what may be the most explicitly Jewish feature of Phish’s identity as a band: a traditional prayer.

In “’I Tell Myself I’m Part of a Tribe’: Performing Jewish Identity and Community through Phish’s ‘Avenu Malkenu,’” Cohen contends that Jewish Phish fans – a subset within a subculture – feel a “doubling down” of their identity in the band’s rarely performed cover of the classical Days of Awe prayer familiar to most Jews; Phish plays it in a funky 5:4.

“When a Jewish person hears ‘Avenu Malkenu’ at Phish they’re already in a sort of in a musical space and mental space that is highly spiritualized,” Cohen said.

For Rabbi Jessy Dressin, a community rabbi for the JCC of Greater Baltimore, this moment of spirituality has implications for the history of Jewish ritual. Dressin’s paper, “‘Where the People Come to Pray’: Sacred Pilgrimage, Holy Ritual and Communal Rejoicing from Jerusalem to YEMSG,” uses her lived experience at Phish concerts as a way of making sense of ancient Jewish pilgrimage to Jerusalem as described in the Talmud.

“As a student of Jewish tradition I’ve sought to get into the imagination of stories of what the time and experience of ancient Israel must have been like when the Temple was standing. That is a two-dimensional experience as a student living in the modern world because the only accountings that we have of it are in rabbinic literature,” Dressin said. “For me as a diehard Phish fan, it was good to make more than one pilgrimage to a concert and see the three-dimensional experience of being in an environment where elements of pilgrimage, ritual and communal rejoicing and celebration are integral components.”

The panelists agree that scholars, clergy and academics are not the only ones who see a Jewish link to Phish. In typical Talmudic style, members of the tribe who follow Fishman, Gordon, lead singer and guitarist Trey Anastasio and keyboardist Page McConnell gamely dissect everything the band does from their set lists, to certain live recordings to Anastasio’s mythological world of Gamehendge, where a group of peaceful people called the Lizards worship the creator of a text known as “The Helping Friendly Book.” (It should come as no surprise that Kroll-Zeldin is hoping to compile his own book informed in part by the presentations at the conference.)

Though Anastasio’s mythos, with its robotic hangmen and gun-toting llamas isn’t exactly the stuff of shul, for many fans Phish concerts themselves are a kind of service replete with their own brand of semaphore and fans know what shibboleths to look for to identify their own.

“When you go to a Phish show a lot of people know what’s going on. There’s a lot of signs between the band and the community and people are looking for the transition notes and so as a result there’s a lot of comparisons to prayer and minyans and ability to be in a collective,” Ladon said, noting that a rabbi in the ‘90s led a service in parking lots before Phish shows, convening fellow members of the tribe in a traditional religious experience adjacent to an unconventional one.

“Jews are taught from a very early age that we need to find our people and we need to stick together and that we are a community,” Cohen said. “If you didn’t get that through religion or you think religion is BS, you’re able to replicate that acculturated desire for community through Phish.”

No Gefilte Here, But There’s Plenty Jewish At The First Academic Conference On Phish