The Secret Jewish History Of ‘Alien’ 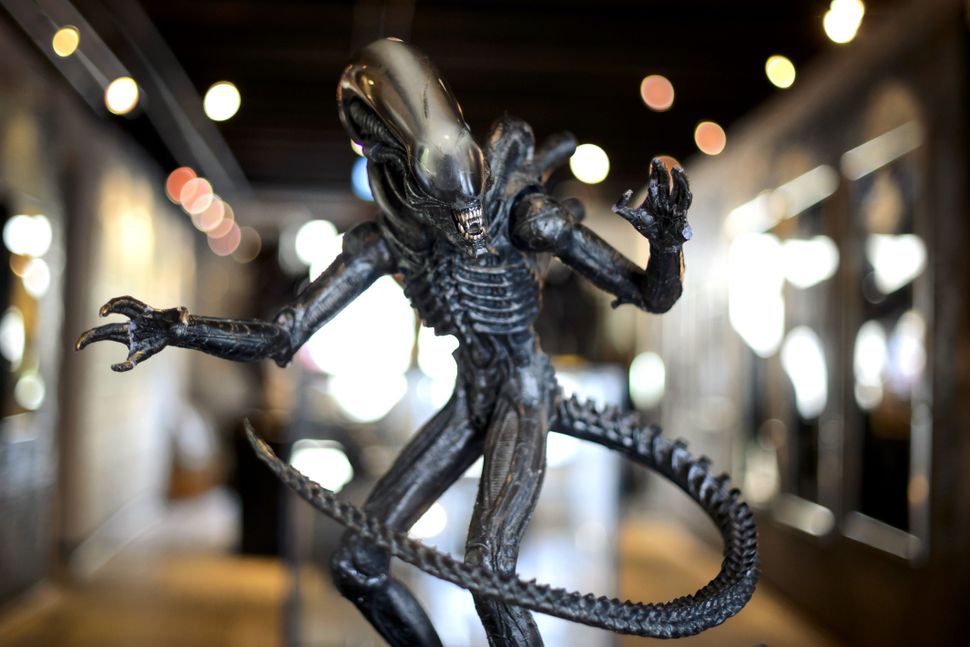 On the surface, there is nothing at all Jewish about Ridley Scott’s “Alien” (1979) which celebrates its fortieth birthday on May 25. But probe a little deeper and the film and its subsequent franchise owes its conception and execution to the work and ideas of many Jews, as well as bearing Jewish symbolism.

Generically speaking, all of modern science fiction owes some debt of allegiance to Stanley Kubrick’s “2001: A Space Odyssey.” The Jewish themes of that movie have been discussed here. But the clearest homage is MU / TH / UR 6000, known as “Mother,” the Nostromo ship’s all-knowing computer, which is clearly modeled on the HAL-9000 supercomputer in Kubrick’s landmark science fiction movie. Like Hal, Mother is aware of a secret mission unknown to the crew. The cyborg Ash – whose name curiously echoes that of Hal – is another of his descendants not least because he secretly sabotages the crew’s efforts to survive, just as Hal does in 2001. The actual, physical link between the two movies is Roger Dicken, the designer of the small alien, who also worked on “2001.”

Before helping to write Alien, in 1975, screenwriter Dan O’Bannon had spent six months in Paris, working as a visual designer on Alejandro Jodorowsky’s planned production of the science-fiction epic, “Dune.” One wonders how much of that Jewish director’s vision influenced the look of “Dune.” There, O’Bannon met the Swiss artist Hans Rudi Giger whose conception and design of the alien and its technology was key to creating its memorable look. Giger had visited Salvador Dali because Jodorowsky had cast him in the film.

Ridley Scott was brought on board when Jewish producer Sandy Lieberson, then head of 20th Century Fox’s London operation, showed him project while it was in development.

As it appears on screen, the sparse opening of “Alien” owes a debt to the work of credit designer Saul Bass. His film “Phase IV” (1974) which pitted evolved ants against human also influenced “Alien.” The score was composed by Jerry Goldsmith and patched together from one of his previous scores – John Huston’s “Freud” (1962).

Indeed, the film has been analyzed for its Freudian echoes, particularly in its anxieties relating to motherhood, birth and childhood. The fear of feminine reproductive power was something that had occupied other Jewish filmmakers from Roman Polanksi’s “Rosemary’s Baby” (1968) to Larry Cohen’s “It’s Alive.” The visceral horror of the movie, particularly the infamous chest-bursting scene, owes much to the body horror of David Cronenberg who was beginning to make a name for himself by this point with such movies as “Rabid” (1977) and “The Brood” (1979).

The film’s suspicion of multinational global corporations – here it is ominously labelled simply as “The Company” – follows in the wake of Alan J. Pakula’s conspiracy films of the 1970s, particularly “Klute” (1971), “The Parallax View” (1974) and “All the President’s Men” (1976).

Then there are the biblical themes of “Alien.” The name Kane recalls Cain of Genesis and Kane is indeed marked out like his biblical namesake. The character of David in the 2012 prequel, “Prometheus” and its 2017 follow-up “Alien: Covenant” echoes that of the Israelite king (as well as David Bowman in 2001).

Significantly, there are seven human members of the crew – a number rich in Jewish significance. If we add the eighth member – Jonesey the cat – it makes eight, a number similarly symbolic.

One might also consider the alien lifeform itself as an embodiment of the Jewish condition. Alone, wandering in space, it is as Ash calls it, a “survivor.” The organic-machine combination gives it an androgynous quality (it is a female entity but played by a male actor, Bolaji Badejo), again something which has been leveled historically at Jewish men in particular. Technically known as a Xenomorph, its ability to blend into the surroundings of the spaceship suggest a gift for mimicry – a hallmark of the Jewish condition — echoing that of the Transformers.

The very name of the film also suggests how Jewish immigrants have been perceived in Europe and the United States as reflected in the anti-immigrant legislation in Britain specifically designed to curb a Jewish “invasion,” The Aliens Act of 1905.

Behind the film prowls memories of Nazism and the Second World War. Dan O’Bannon’s original screenplay was about a bomber flight rather than a spaceship. The set was constructed from parts of obsolete bombers and models of the Nostromo were coated with bits taken from model Airfix kits of Second World War aircraft. Ridley Scott even used iconic images of Nubians shot by Nazi propagandist director, Leni Riefenstahl, as a visual reference for the adult alien.

Finally, the alien is a relentless, remorseless exterminating machine. All biological organisms are its potential victims. In the prequel “Prometheus,” a crew member describes a pile of corpses he has stumbled upon as resembling a “Holocaust picture.” Thus, it has even been asked, “Can we say that behind those murderous vagina dentata of “Alien,” these atrocities of the twentieth century lurk?

The Secret Jewish History Of ‘Alien’