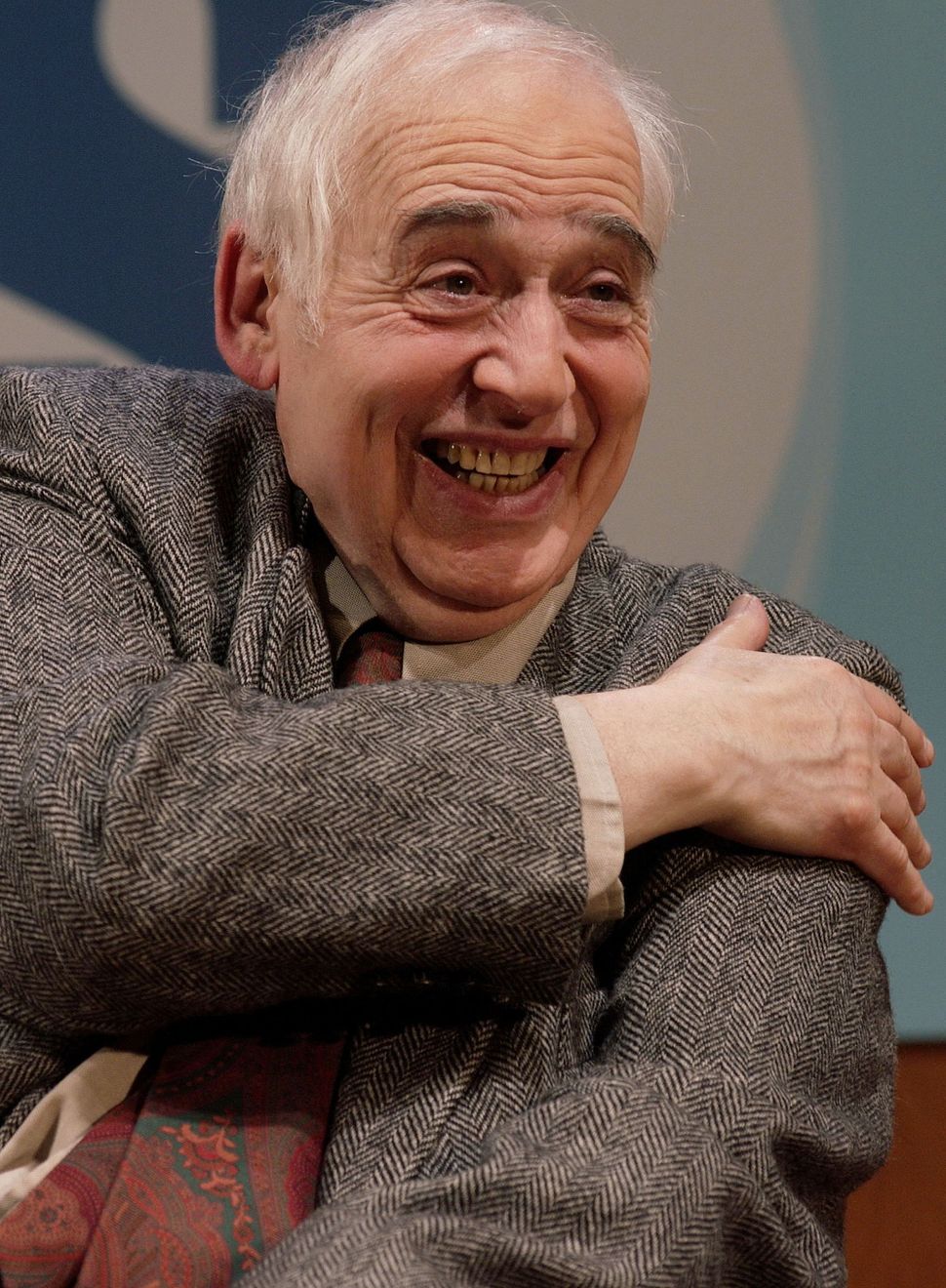 Harold Bloom, the American Jewish literary critic, has died at the age of 89. During his extremely prolific career, his audience was split between adulation and obloquy. His landmark books speak for themselves, including “The Anxiety of Influence” (1973),, “A Map of Misreading” (1975), “Agon (1982), “Ruin the Sacred Truths: Poetry and Belief from the Bible” (1989), and “The Western Canon” (1994), An anthology of his writings is due from the prestigious Library of America series in October. Yet Bloom’s work remained controversial, possibly in part due to his feisty love of argument.

In interviews, he could emit invective, as when he told The Washington Post in August 1985 that the critics Hilton Kramer, Joseph Epstein, and Norman Podhoretz were “sublime asses.”

If such teases did not elicit contentious responses, his productivity alone led some critics to implicitly long for his demise. In November 2011, one such arbiter diagnosed Bloom with a case of “logorrhea so Niagaran even death will be hard-put to shut it off.”

That statement was made by a Jewish male critic. Jewish male readers sometimes indulged in the most extreme reactions to Bloom’s writing, possibly because they took it so personally? Did such naysayers dissuade Bloom from completing his long-term project of a book declaring Sigmund Freud the “greatest modern writer”? Bloom’s brief introduction to the father of psychoanalysis (1985) hardly exhausted his views on the subject.

Other writers on Bloom produced self-advertising sycophancy. Given a choice between fawning and the “spirit that negates,” the self-description by Goethe’s Mephistopheles, how are Jewish readers to cope with the vast legacy of Bloomiana?

Perhaps oddly, a Catholic point of view might be a starting point, although Bloom cheerfully offended Christians as well as Jews with his assertion that the Bible was best dealt with by literary critics as a work of fiction. In a book published in 2007 by Fordham University Press, Peter Du Brul, a Jesuit from Cincinnati, expressed himself on the “genius and the wisdom of Harold Bloom.”

Father Du Brul reminded us that Bloom’s writing concentrates on life, not just books. Bloom can motivate interfaith dialogue because “one can take him or leave him. The joy is in taking him, and taking him on. For he is a teacher, an entertainer, a serious, funny, outrageous sort of prophet; a wise and foolish old man: Lear and his Fool combined—a sort of Charles Laughton-like character actor who takes himself much less seriously than that toward which he is pointing.”

Indeed, Bloom’s theatricality was part of his appeal to generations of students. He repeatedly extolled Zero Mostel, as well as the equally leviathan-sized Samuel Johnson and Falstaff, showing how deeply he identified with these heavyweight antecedents. Repeatedly he appeared in public readings presented by The Shakespeare Society, in which he incarnated the role of Falstaff alongside renowned stage actors.

Father Du Brul paraphrases one of Bloom’s messages: “Read to enjoy! Everything else is ideology. It is the enjoyment of beauty that is the central human experience that links other experiences to one another.” By consuming a book with strength, readers participate in the creative act that the writing represents. It is as if Bloom urged us to exclaim after reading every book, and not just each book of the Torah, “Chazak, chazak, v’nitchazek” (Be strong, be strong, and we will be strengthened).

Always unorthodox, Bloom told Beliefnet.com in 2005 about his book “Jesus and Yahweh” that the latter was really a “kind of scamp…Yahweh is a human, all-too-human, much, much too human God, and very scary. He is irascible, he’s difficult, he’s unpredictable, and he himself doesn’t seem to know what he is doing.”

How could a supervisory God as presented in the Bible have absented himself during the murder of Bloom’s family in the Holocaust? To explain it, Bloom embraced the idea of a Gnostic God, who after having created life, absented himself indefinitely from human history. As Bloom told a Latvian interview in October 2005, he could never bring himself to travel to Eastern Europe because “my parents’ families were slaughtered there, so I stayed away.”

Perhaps because of this tragedy, Bloom compensated with humor, sometimes in unlikely biblical passages where the jokes escaped others. In “The Shadow of a Great Rock” (2011) Bloom proclaimed that his favorite book in the Bible was “Jonah, by far.” He was drawn to this story “because it is so funny. Irony, even in Jonathan Swift, could not be more brilliant. Jonah himself is a sulking, unwilling prophet, cowardly and petulant.”

Irony certainly leavens Bloom’s evaluations of some writers, such as the Nobel Prizewinning author Isaac Bashevis Singer, whom he considered “far from the foremost of Yiddish fiction writers.” When Singer’s “The Penitent” was translated, Bloom deemed it a “very unpleasant work, without any redeeming esthetic merit or humane quality.”

Fleeing this and other sources of unpleasantness, Bloom developed affinities with American Catholics, as if consciously refuting his early childhood experiences in the East Bronx, fighting anti-Semitic Irish Catholic gangs described in Bradley Hart’s “Hitler’s American Friends.” For Bloom, interfaith reconciliation extended to plans, announced in 2003, to donate his personal library over 25,000 books to St. Michael’s College, a small Catholic college in Vermont. The gift was intended to honor a friend and former student, John Reiss, a professor emeritus of English at St. Michael’s.

Not designating a Jewish institution as donatee was a personal choice that only Bloom could have explained. But non-Jewish readers, taking some of his unorthodoxies less personally, appeared to share his taste for irreverent jocularity with more ease than many of his landsmen. Reviewing Bloom’s “Genius” (2002) the English critic Frank Kermode suggested that Bloom’s serious arguments about biblical authorship in “The Book of J” suddenly explode into wild attribution that is “not serious; it is comical, a sort of scholarly slapstick…. We could speak of it as witty, a product of the Falstaffian persona Bloom likes to adopt, and which could be thought of as, at best, an invitation to wit in other men.”

Kermode clearly relished Bloom’s “grandiose flippancy.” Whether Gershom Scholem, the philosopher and historian of the Kabbalah, felt the same way, he replied sagely when asked his opinion of Bloom’s heresies: “It’s a free country.” Indeed, Harold Bloom helped to make reading, as well as literary criticism, vehicles of freedom in our era, a time when he was obliged to pinpoint the decline of American liberty and values.

His identity was always multiple and changing. In May 2019, Bloom reflected to the Los Angeles Review of Books:] “I think when I depart that I will think of myself as a secular rabbi. One reads to the congregation, yet also to oneself. Yahweh bewilders me. I cannot accept him. I cannot reject him. The God of my mother and my father cannot be just an old story. I do not trust in the Covenant, but I cannot deny the transcendental and extraordinary.”

Nor can readers deny that the extraordinary Harold Bloom will be missed from the American literary landscape.