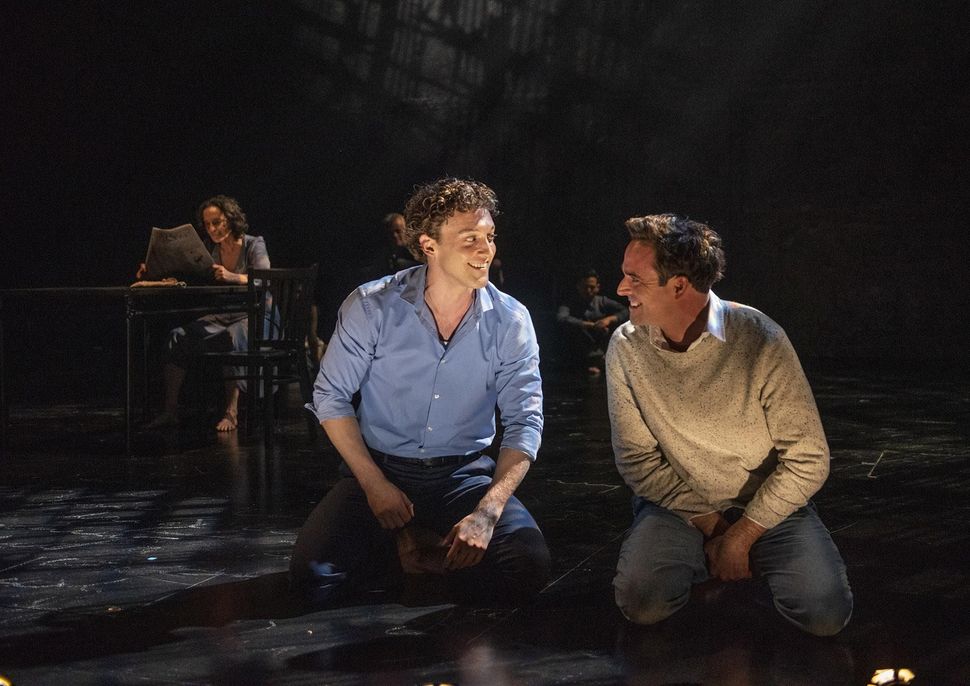 As I walked into the completely packed house for a performance of “The Adventures of Augie March” — the new play based on the Saul Bellow novel that is making its world premiere right now in Chicago — I thought of how Bellow was once everywhere. He won the Nobel Prize in Literature; taught at the prestigious Committee for Social Thought at The University of Chicago for three decades; and when he traveled to Jerusalem, Mayor Teddy Kollek spent months introducing him to every dignitary he could find, from every faith and source of power contained within Jerusalem’s city limits, including the editor of the Arabic-language newspaper.

I discovered the Jerusalem part of Bellow’s story in his charming book “To Jerusalem and Back,” which my brother purchased used, in Iowa City, for ten cents. My favorite section is about the barber at The King David Hotel, who had numerous signed photos of Hubert Humphrey. “How ingenious of Humphrey to win the barber’s heart,” Bellow muses, admiring Humphrey’s instincts; the King David, then as now, hosts presidents and presidential candidates, major donors, and various movers and shakers from all over the world. Of course these visitors eventually need haircuts, or a close shave. As I read, I admired Bellow’s resourcefulness and talent as a reporter and as an observer of human character, down to the barber’s patterns of speech.

Before seeing this crowd at the Court Theatre, I had considered how and why Bellow’s influence, literary and political, seems to be in decline. And this can appear to be true on both ends of the journey chronicled in “To Jerusalem and Back”; Bellow is not read in Israel, where instead, Stefan Zweig makes the bestseller list, and Bellow is not as important as he once was in Chicago, as dominant in the literary scene. I can’t remember the last time a contemporary writer of my generation has mentioned Bellow to me in conversation, though I do remember a former roommate’s mother’s interest in Bellow quite clearly. I felt this possible generational change, or so I surmised, while trying to procure a copy “Augie March” in preparation for seeing the new play adaptation. It was not in the local library, in a neighborhood home to many local writers, nor was it in any of five used bookstores I tried. Sure, there are 219 copies in The Chicago Public Library system, but I couldn’t seem to find an available one within easy distance. Two phone calls to friends with gigantic book collections revealed that they didn’t care for Bellow and therefore couldn’t help me. I remembered that in my undergraduate and graduate education, including two graduate degrees in creative writing, I was never taught any work by Bellow, and this might be his real problem: he’s not taught anymore, so younger readers don’t encounter him, and therefore don’t have him in their home libraries.

Then there is the #MeToo factor; coverage of this play, which will be on stage through June 23rd, often mentions Bellow and his attitudes toward women. The Chicago writer Rachel Shteir, writing in The New York Times, quotes Vivian Gornick on this issue. “Of course he’s a misogynist,” she said, but argued that “Augie March” was an exception, with the characters of Augie and Thea truly equal.”

All of this made me more curious to see this iconic 1953 novel on stage, and to understand how it would be received right now, in 2019 Chicago, where it is playing in Hyde Park, Bellow’s old neighborhood, which, of course, is now better known as Obama’s neighborhood. My attempts to see “Augie” were delayed a bit by an actor’s cancellation, but the final result was—well, absolutely thrilling. It was a reminder of why Bellow matters, what his power is. I left thinking that Bellow is far from done. And I left thinking about the power of art altogether, and how the work rises above it all.

Augie on stage rides on three great forces: Bellow’s unparalleled ear for speech, which the playwright David Auburn — who won a Pulitzer for “Proof” — recreates to an astonishing degree; Bellow’s willingness to tackle fundamental human subjects like betrayal and our true role in our own lives; and the talent of the actors, many of whom play multiple roles, just as people in Augie’s life — perhaps in every life — turn out to play multiple roles. These actors, sometimes crawling on the stage, bring us into the experiences of blindness, desperation, and disappointment in a visceral way. Most movingly, Patrick Mulvey, who plays Augie — and who may be familiar to audiences from “Empire,” “Chicago Fire” and the BBC series “River City” — excels at conveying plain old goodness, and seems to genuinely revel in his own life.

This reverence for life itself comes through when Augie’s friend contemplates an abortion. Here, the play seems ragingly relevant and contemporary, as abortion restrictions are again law in Alabama and Missouri, and as Roe vs. Wade is in danger. A few years ago, this part might have seemed dated. Now? Well, we are all scrambling for a raft in the sea of rising authoritarianism, and none of us knows what’s next. Survival — life itself — is in the balance, as it often was for Augie, and many in immigrant communities, then and now.

The play, unlike the novel, opens with Augie at sea. From that shipwreck scene, the play then moves back to how Augie grew up, with a blind mother, a “grandmother,” a brother with what might be called severe learning disabilities, and another brother who is the “successful” one with a job at the police station. It is the scene of many Jewish families in the early part of the 20th century; desperately poor, surviving by taking in boarders, and often forced to hustle or turn to blatantly criminal activity in order to eat.

In some fundamental ways, this is a Jewish play. There is a Shabbat scene which bizarrely starts with sim shalom and then moves to Shalom Aleichem, which many sing before the Shabbat meal. (The pronunciation was perfect). Several characters speak in Yiddish-inflected English, a rhythm that was once familiar in American literature because of Bellow and Bernard Malamud and is now fading away; Yiddish is rarely the mother tongue of today’s American Jewish writers, but there is still something intimately familiar about the English-with-Yiddish-rhythms of prior generations.

At one point, Augie is offered a “job” as Santa’s helper, which involves petty theft, and Augie’s brother responds with the obvious reason why Augie shouldn’t take the job: “we’re Jews.” Of course, I thought of Nathan Englander’s classic story “Reb Kringle,” which imagines an old rabbi as a department-store Santa. But Bellow had that first — he, too, noticed how many holiday Santas were actually Jews in desperate financial straits, and who already had the beard and the belly required.

But of course, this is also an American novel and a deeply American play, as Augie’s famous incantation — “I am an American, Chicago-born” — makes clear. Seeing it right now, what comes through most is a meditation on immigration, on the hope of America versus the reality. Bellow, lest we forget, was an undocumented immigrant. In 1924, the year Bellow came to America, Congress passed the 1924 Immigration Restriction Act; immigrants from various countries were banned, including Russian Jews. Bellow’s parents, who had fled anti-Semitic persecution to Canada and finally Chicago were the lucky ones. After 1924, millions of Jews perished because of these laws. It is impossible to see this today without thinking of America’s current immigration crisis, the “travel ban”, and those who are suffering because of it. Characters like the “genius Mexican physicist” who eats one meal a day and steals books to fund his education remind us of what was, as well as what is.

Like all great writers, Bellow’s real subject is humanity. Sure, this is a Jewish story, an American story, and an immigrant story, but it’s really a human story. It’s about a brother betraying a brother, a son abandoning a mother, and a young man who realizes he can be a supporting actor all his life in other people’s stories — or he can write his own story. There is no more human decision than to become your own person or not.

It is impossible to listen to this play’s dialogue — and to the rapt silence in the audience, punctuated by raucous laughter — and conclude that Bellow won’t matter to future generations. It is impossible to think this even without any sound, with just the actors’ expressions and the shadows on stage as evidence. In a novel with so many subplots, the question of what to highlight is paramount; here, the tremendous effect of light and shadow, and the masterful contribution of the shadow poetry collective Manual Cinema hauntingly compliment Auburn’s magnificent rendition of Bellow’s prose and fully bring Augie’s inner thought to the stage.

I knew I would make a pilgrimage to the Special Collections Research Center at the University of Chicago Library to find out more about the process of how this play became what it is; Bellow’s handwritten drafts, the playwright’s drafts, the director’s notes, and the costume designer’s sketches, among other treasures, are on view through the end of August. At the end, the play seemed to go on for too long, as it shows Augie as his own man, out of his brother’s shadow but still not out of existential danger; but these are minor quibbles with an outstanding performance that I will remember for a long time.

I should note that I do understand — but don’t fully agree with — the comments of two women I spoke with after the performance ended, who felt that the female characters here act without a clear reason; both women interpreted this as a sign of misogyny, of a certain flatness, a view of women that does not see them as whole people. Overall, the audience itself made me think about what many hot takes on this play missed, and what I had somehow convinced myself of: the truth is that there are a lot of young people interested in Bellow out there, and the audience was reasonably diverse — less so than at a recent play I attended by Lynn Nottage, but certainly more diverse than most other theater performances I have been to in the past year. My friend and I sat between a younger couple in their early twenties and a couple in their seventies — a metaphor for what may have happened to Bellow. This unforgettable play has an excellent chance of reminding us that Bellow, for all of his well-documented flaws, wrote of and for the human in all of us, and made a masterpiece out of the human journey — that adventure, or perhaps more accurately, those adventures.