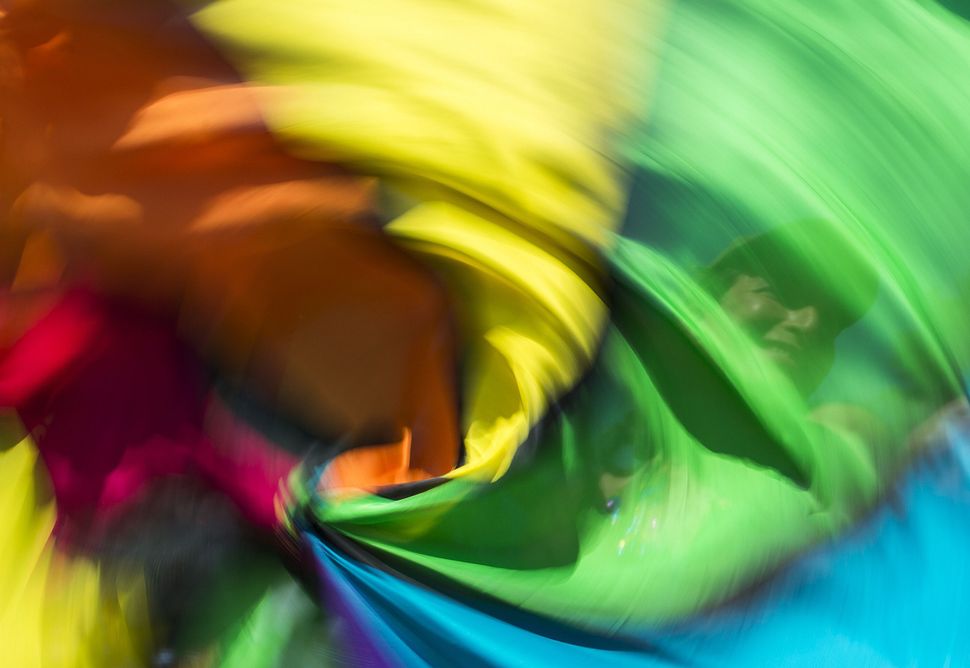 I was not shot as I lay on the floor of a Japanese restaurant in Washington D.C. while the city’s Pride Parade erupted into panic. Not a scratch on me. I didn’t suffer a sprained ankle or other light injuries as others did, from running through the streets that radiate out from Dupont Circle.

This happened on June 8th, almost three weeks ago, but I can’t shake my memory of the experience.

It started at about 7:30 that Saturday evening, I was eating dinner at the counter of Rakuya, a short distance from the circle on 19th Street Northwest. I’d lifted a piece of tuna sashimi into my mouth when I noticed people suddenly moving around in strange ways, responding to a waitress who shouted: “Active shooter, get down! All get down. Shooter! Quiet and all down!”

She held a serving tray and remained upright as she stepped among customers who were sinking to the floor. In a blur of fear and disbelief, I slid off my stool. I am a very tall man, and pressed myself as low as possible and looked at others who lay there and looked back at me.

The facts added up: This was a Pride Parade and the LGBT community had already been the target of such violence, as had the Jewish community, and many other groups. An automatic weapon could spread bullets that Rakuya’s stools and tables wouldn’t stop.

I knew the smooth intensity of automatic weapons fire, having heard it at close range when I was a reporter for the Los Angeles Times covering a story about gang violence.

I was sure I heard it now, and froze with terror.

The restaurant faced 19th Street through a glass wall, and I got glimpses across the floor of people running up the street in a rush of flailing arms and bending legs exposed by summer clothes. Pride-colored signs and hats flew into the air as the crowd fled from shots they must have heard.

Where were the gun sounds coming from?

Could Rakuya be the shooter’s target? Maybe he was inside this place filled with people in pride colors, many young. Imagining him clenching his gun, I prepared for shots to start.

The waitress remained on her feet, and yelled at me: “Down!”

I quickly got bored with wondering how to save myself if shooting started. That’s me. Boredom is how my nervous system masks fear, enabling me to think despite it. I thought about people who entered public spaces with guns built for many quick killings.

I thought about the victims in the nightclub in Orlando, and at the synagogues in Pittsburgh and Poway, and of other sites multiplying across the map like parts of a huge grave whose edge had reached me. As I looked at the living limbs and torsos and terrified eyes facing me across the floor, the possibility of us dying together was both shocking and as common as having a meal.

I thought of the politicians and business leaders who would bear the responsibility for what happened. I held them wholly to account, faceless and nameless, as I lay there. I had, as my bar-mitzvah Torah reading, the speech in which Moses tells his people to “choose life,” and I wondered now why the society I live in does not make that choice more clearly.

I’d driven from New York to DC to have lunch with two old friends from high school, Mona and Jan, the three of us now in our 60s and still in touch. Years go by between our get togethers, but we remark every time at how well we get along after so many years.

We spent a deliriously good time together in the restaurant of the Dupont Circle Hotel, sharing a long lunch during which we’d talked about politics, culture and other school friends. Spending the afternoon next to the hotel bar’s large windows, with views of the circle, we took in a sunny day alive with pride voices, pride sounds and pride colors that were our backdrop but not our focus.

Close to 7 pm, I walked them to the Dupont Circle Metro Station, where we hugged and said goodbye, and my friends rode down an escalator.

Then, I went to Rakuya for dinner. And, now, I was on the floor, and the thoughts with which I filled my mind were stopped by awareness that others were getting up at last. I hesitantly stood up.

People asked each other: “Was there a shooter? Was anyone hurt?”

No one knew, but most of us slowly resumed eating.

Back at my hotel, I read in news reports that there was no shooter, at least not the mass shooter aiming a weapon indiscriminately into the crowd. I watched news videos of crowds pushing over police barriers to get away, running in waves. A guy had been arrested at Dupont Circle for pulling out what turned out to be a BB gun, police said, and that had started it.

The next day, I hung out around Dupont Circle Hotel as it rained. I spoke with workers in restaurants and stores about the panic. “Suddenly it was madness,” said a young waiter at the restaurant where I had eaten with my friends. I spoke with employees at several businesses and heard how hundreds of people had dropped to floors and locked themselves in bathrooms, some screaming.

That Sunday evening, exactly 24 hours after my first visit, I re-entered Rakuya through its glass front. It hummed with people eating and talking, and I had to wait before a stool was free.

The same waitress who’d remained on her feet the evening before moved around in the same forceful, friendly way. I asked her for her name. It was Veronica Murty. I told her I was there during the panic, then asked what gave her the courage to stay exposed to make others keep down.

“I thought that was what I should do, because they had come to the restaurant and they should be safe.”

“Someone else might not have done that,” I said.

“I got it from books,” she said. “I read books and they are filled with stories. I love spy books and crime books about the crazy things that go on in Washington. I imagine the fiction and then I place myself in it and think: ‘What would I do, if I were in this story?’ This time, it was not fiction, but I thought of it like that and I knew what to do.”

After thanking Veronica, thinking of how she imagined life as a way of living it, I retraced my steps to the Dupont Circle Metro Station, and stood at the spot where I’d said goodbye to Mona and Jan. I relived our last moments together, and was glad they’d left before the panic.

I looked up past the escalators, at a granite wall curving above them and noticed words were carved into the gray stone. I realized they were poetry that rose and fell in a cadence I recognized as that of Whitman. But what poem was this?

The quote came from a poem he’d written near the end of the Civil War. He’d heard that his much younger brother, George, might have been severely wounded, possibly killed, in battle, and travelled from New York to search for him in Washington hospitals filled with dying and injured young men.

George turned out to be just slightly injured, but Whitman stayed on and nursed other soldiers. He wrote this poem, titled the Wound-Dresser, and it included the lines that I read on the high wall:

Returning, resuming, I thread my way through the hospitals;/ The hurt and wounded I pacify with soothing hand,/ I sit by the restless all the dark night—some are so young;/ Some suffer so much – I recall the experience sweet and sad…

I read on my phone how, in 2007, when the Dupont Circle station was opened, the poem was grooved into the wall to honor the city’s caregivers during the HIV/AIDS crisis, which hit especially hard in neighborhoods branching off of Dupont Circle.

The rain fell hard over the public wall and me, since I had no umbrella to shield myself.

I was not shot or wounded while lying on that floor, I thought. What happened in Orlando and Pittsburgh did not happen. Whitman wasn’t needed as witness to another group of victims. Veronica’s caretaker’s bravery had not been needed. Dropping to floors and running crazy through the streets was completely reasonable in America, but nothing much happened.