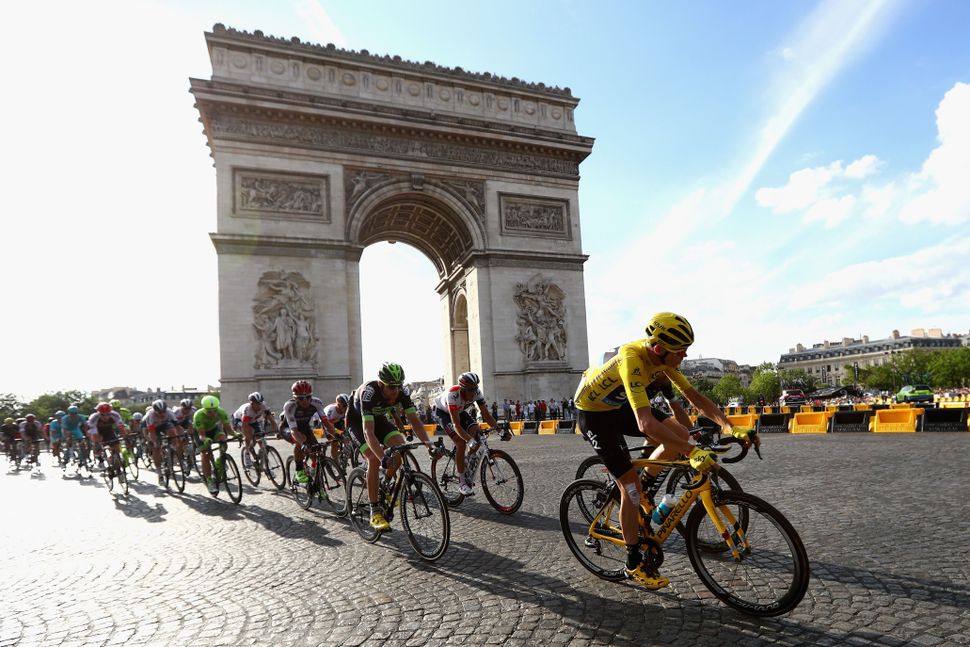 To paraphrase comedian Jackie Mason, is there a bigger schmuck in the world than a Jew on a bicycle? He might be right; after all, the link between Jews and cycling is seemingly tenuous. But, as the most prestigious cycling event in the world gets underway, there is an intriguing connection between Jews and the Tour de France.

The Tour has its origins in the Dreyfus Affair which divided France between 1894 and 1906. Captain Alfred Dreyfus was a Jewish officer in the French military. Falsely accused of treason, he was court-martialed and sentenced to life imprisonment on the infamous penal colony of Devil’s Island.

Founded in 1892, Le Vélo (the bike), widely considered to be the first sports newspaper produced in France, openly supported Dreyfus. This willingness to use the publication to serve political causes alienated a significant proportion of its readership. This led to the setting up of a rival publication, L’Auto- Vélo, by a syndicate of ultra-right-wing, anti-Dreyfus bicycle manufacturers in 1900. They aimed to put Le Vélo out of business.

The two papers soon became embroiled in a bitter rivalry and the race was invented to boost the circulation of L’Auto, after its circulation started to plummet from competition with Le Vélo. L’Auto-Velo’s editor came up with the idea of organizing a grand-scale bicycle race to trump those organized by Le Vélo. The first Tour de France was held in 1903 and promoted through the L’Auto-Vélo newspaper. It is no coincidence that the leader and winner of the Tour wears a yellow jersey for that was the color of the paper on which L’Auto-Vélo was printed. The move so was so successful that Le Vélo ceased publication in November 1904 while L’Auto continued through the Nazi occupation of France something for which it would later be reproached. It ceased publication in August 1944, just before the liberation of Paris.

The irony of the choice of the color of the winner’s jersey is that yellow was precisely the color used by the Nazis to demarcate and demonize those European Jews under its occupation. A further sinister link between Jews and cycling is the “Vél d’Hiv” roundup which took place in Paris on July 16–17, 1942. It was the largest French deportation of Jews during the Holocaust. The name “Vél d’Hiv” is derived from the name of the Vélodrome d’Hiver (“Winter Velodrome”), a bicycle velodrome and stadium where many of the victims were temporarily confined.

During the Second World War, Italian cyclist Gino Bartali, who had won the Tour in 1938 and would do so again in 1948, played a key role in saving Jews in his country. He joined a secret network offering protection and safe passage to Jews. His role was as a courier. Under the cover of long training rides, he carried photographs and counterfeit identity documents. Bartali also hid a Jewish family in his cellar, saving their lives. In September 2013, Yad Vashem recognized him as “Righteous Among the Nations” for his efforts.

In some senses, the anti-Semitic origins of the Tour de France are still relevant today, for it has been Judenrein in terms of its participants over the course of its lifetime. No Jewish men have competed in it. In fact, the only Jewish person to have cycled in the Tour is Israeli cyclist Shani Bloch who raced in the female Tour de France in 2002.