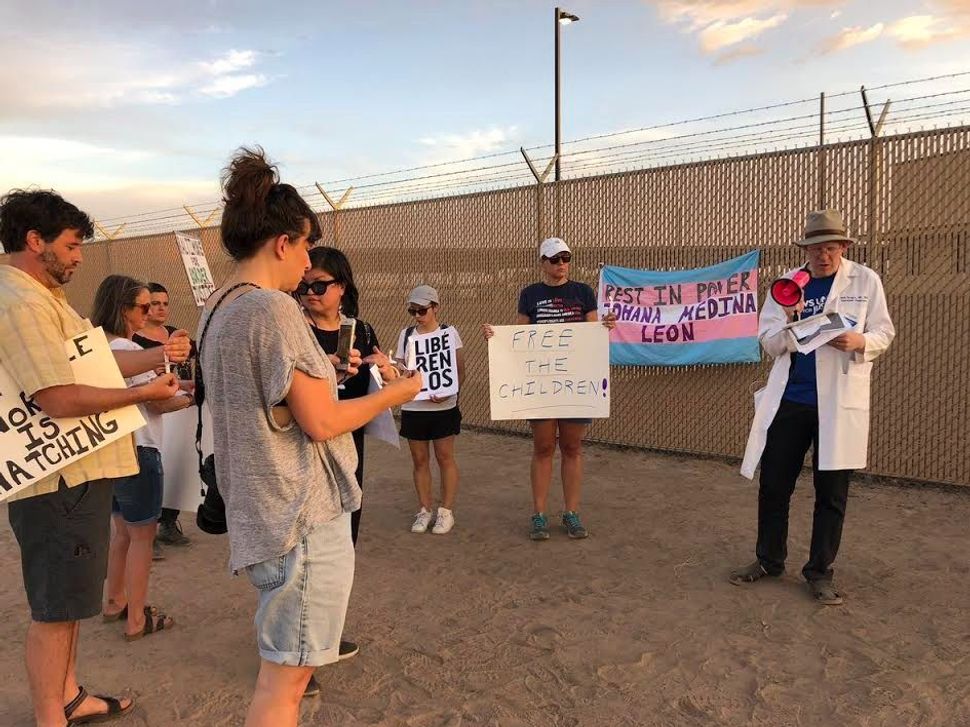 In addition to my other responsibilities, I have been serving quite a different population of patients for the last year and a half. For a day and a half a week, I’ve been working on Baltimore’s South Broadway, more and more a Spanish-speaking neighborhood over the past ten to twenty years. I serve as a staff physician in Esperanza Center, which meets the needs of undocumented immigrants in Baltimore, mostly from Mexico and Central America and speakers of Spanish among other languages.

The center is run by Catholic Charities of Maryland; that organization, together with Johns Hopkins, support the portion of my salary for the portion of my time there. (Of course, the patients I usually see at Hopkins, from the city’s majority African-American population, are no less disadvantaged, though in other ways.)

Despite the barriers to entry, despite our government’s express wish to keep out anybody but white people, these immigrants keep coming here from Mexico and Central America, propelled by economic and social crises wracking their home countries. Nothing to eat; no way to make a living. If that were not enough, these countries are riven by inescapable urban and rural violence, some perpetrated by these countries’ governments themselves. No surprise that these people leave as soon as they can, taking their loved ones with them.

Talking with these immigrants, or just reading the news, you realize quickly that they are traumatized not just by their home countries but also by our own country and government. After a voyage of hundreds of miles, most often by foot, the refugee families are torn apart, the children imprisoned behind high walls in camps without proper medical care or a comfortable bed.

Immigrants who want nothing more than to feed themselves and their families wait in fear for deportation or a spontaneous ICE raid at the corner they wait at for work.

Heartsick, I read about the deportations, the concentration camps where children were denied sleep, affection, food, and space of their own. I read about medical care that was substandard or totally absent. Kids were being tortured.

All at once, I understood my duty to be present at a protest against the moral violations and inhumanity on the part of my government. How can I look on as a doctor while my patients are deported and their families imprisoned in camps? As a Jew, how can I ignore the verse from the Torah: “Don’t stand by the blood of your fellow”? Yes, some read the Hebrew word re’echa, your fellow, in an ungenerous way, as “fellow Jew” (or even worse, as just “religious Jew”). I read it broadly as “fellow human being.”

Speaking of Jewish history, when I think about the so-called facilities where our government keeps refugee children, I call them concentration camps, because they are.

Because of the summer calendar and the July 4 holiday, I had a couple of days free from patient-related and family responsibilities. It was bashert: I had just read on Twitter about a new movement, hashtagged #CitizenPresence, whereby ordinary US residents show up at ICE and border patrol camps to bear witness. Such presence is a demand that these innocent immigrants be released and reunited with their families, a cry of opposition to the renewed strain of white supremacy disseminated by our government and those complicit.

I researched plane tickets from Baltimore to El Paso, Texas. (One of the most infamous children’s camps is located in Clint, near El Paso.) This was not promising. I want social justice but I didn’t want to empty my bank account on a whim, either! I asked on Twitter whether someone could give me a lift in their car from the Baltimore-DC area to El Paso. Into my inbox popped a message from the law professor and human rights activist Heidi Li Feldman: “If I raise the money for you, would you go?” It was one of those social media miracles, or perhaps a virtual visit by Elijah the Prophet. Surprised, I typed out quickly – “yes of course.” I left the computer for 20 or 30 minutes, and when I got back, the necessary funds had landed in my PayPal.

Thanks to Feldman’s initiative and the crowdsourced support, I spent the fourth in El Paso. Out of the frying pan (Baltimore’s summer humidity) into the fire (southwest Texas’s dry heat). As in the previous demonstrations I participated in, one of the high points of the experience was meeting volunteers from other walks of like – mostly women, the pillar of the US progressive movement.

When I landed in El Paso, the law professor-activist Mary Levy picked me up at the airport (she protested last year in El Paso) and together with two other activists we drove to Juarez, Mexico, over the border. There we visited the refugee center Casa del Migrante, the largest of its kind in the city. Owing to Trump’s hatred of refugees, even those seeking asylum in the US, he worked out an agreement with Mexico (the so-called MPP) whereby such asylum seekers would not even be let into our country (as they should by law) but dumped into Mexico awaiting the processing of their applications. So what if their applications won’t actually be processed? That’s catnip, or fresh blood, for Trump’s base.

Practically this means that fewer and fewer refugees are being helped by the worthy organizations in El Paso – because they aren’t coming – and more and more in the corresponding facilities in Juarez. On the day we visited, the Casa del Migrante was strangely quiet; the management there does not let the migrants who stay in the dorms at night use those rooms during the day.

We were in the courtyard looking around, ready to leave, when a man came up to us and introduced himself as Jorge. He had lived in the US for the last twenty years and been deported just three days ago, forced onto a plane to Mexico after his possessions were taken away. He was made to leave behind his four US-born children. Why was he deported? For the grave crime of two unpaid traffic tickets. No trial dignified this kidnapping. Do you feel safer after learning how ICE protects us? Tears still in our eyes from hearing that story (we ended up supporting him and the center with donations), we found our way back over the border from Juarez into El Paso. Then we were off again into the desert near El Paso, to mark a vigil next to the fences of the Clint ICE camp. A complex of low-slung buildings and a considerable collection of official trucks and buses marked the place where kids are held against their will, God knows for how long; ICE doesn’t want to return them to their families. As we pulled up into the driveway at the entrance, two border patrol trucks started following us. We retreated onto the shoulder of the highway; we saw the lights of a police car through our back windshield. This was public land; they could not stop us. In the dusty heat, a diverse band of protestors had assembled. I stood among them awkwardly, a middle-aged Jew in a white doctor’s coat and my yarmulke, under a broad-brimmed sun hat. Many people in their twenties and thirties, some teenagers, had come to join in outrage. Some had driven in from Arizona, without outside support or knowledge of any plan. A curly-haired person named Arthur made a spontaneous stop off the highway to join us; they had seen the flag some of us hung to commemorate a transgender victim of ICE. “I saw my flag,” they said.

The sun was setting and clouds cooled the oppressive heat. There were honks from a number of passing cars, some supportive, some scornful. We held signs calling to free the imprisoned, to close the camps. I made a sign with the words “Keyn mol mer” – Never Again, in Yiddish. I davened Mincha at the wall.

We saw a white bus approach, an ICE logo on the side. It drove up to the facility and some teenagers emerged – refugees, freshly captured. We started to chant in Spanish “Estamos con los niños” – we are with the children. But the children were taken away hastily, soon hidden by the walls and doors of the camp.

I had brought poetry, and the setting sun marked an appropriate time to read it. I recited a Yiddish poem written in 1940 by H. Leivick entitled “My Father Used to Call It Chatzos,” accompanied by my translation. In it, the poet expresses his desperation about the moral crisis of the day, his feeling of unrootedness from his tradition accompanied a desire to commemorate his anguish for posterity.

Sunset. We lit candles. After our assembly, with signs, conversations, determination, and chants, our bearing witness to injustice, I didn’t feel so alone.

I won’t ever forget this year’s Fourth of July. I hope that we won’t need to call attention in future years to such cruelty, but I fear otherwise.