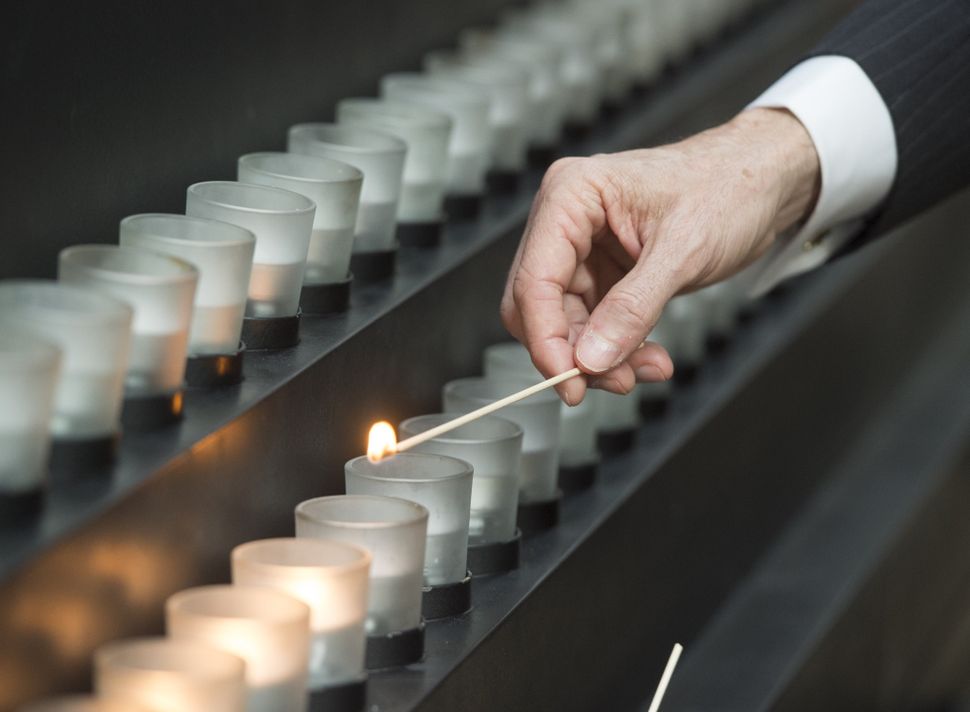 A candle lighting at the Holocaust Memorial Museum. Image by Getty Images

The life of Mark Talisman, who died on July 11 at the age of 78 must be noted for its most significant accomplishments.

Talisman was raised in Cleveland, then as now, one of the most organized and accomplished of Jewish communities in the United States, one in which Jews comfortably played a central role in the it its own vibrant Jewish community and a most comfortable major role in the general community. Educated at Harvard, where he received his BA and MA degrees, he came of age in the turbulent 1960s. The dramatic transformation of Jewish life after the Six Day War, gave American Jews the confidence that they could now comfortably be Jews in public advancing Jewish interests without fear of being accused of dual loyalty. His generation of American Jews had learned from Black Power and Black Pride to embrace Jewish Power and Jewish Pride.

Talisman and his cohorts came to Washington where he quickly mastered the ways of Capitol Hill turning his role as Chief of Staff to Cleveland Representative Charles Vanik, an anti-Communist, Czechoslovakian immigrant to the United States, into a tool that led, in part to the liberation of Soviet Jewry. Working closely with Richard Pearl, then a Democrat on the staff of Senator Henry “Scoop” Jackson, they drafted the Jackson-Vanik ammendment over the objections of President Richard M. Nixon and his Secretary of State Henry Kissinger, securing its passage, which made the immigration of Soviet Jews a significant marker in the US-Soviet relationship. From then on Soviet Jewry joined anti-Soviet hawks with Human Rights advocates and a united Jewish community. The freedom of Soviet Jewry took on an importance all its own.

The shadow of the Holocaust loomed large for Mark Talisman and his generation. By the time he reached maturity there was a growing perception in the 1960s that American Jewry had not done enough to rescue European Jewry during the Holocaust and Soviet Jewry represented a chance, the chance for redemption .In part they felt that the Jews who came to Washington during the Roosevelt Administration were not confident enough of themselves as Jews and secure enough as Americans to push Judeo-Centric issues to the forefront of national attention. They could do better, they would do better, and they did do better. In 1979 working with Stuart Eizenstadt, then President Jimmy Carter’s chief of domestic policy, they worked with the President to secure the safety and the immigration into the United States of Iranian Jewry during the hostage crisis.

Mark Talisman was named to the President’s Commission on the Holocaust under President Carter. His initial task was to school many on the Commission and the Council in the ways of Washington at a time when the leadership was often novice to their task. He kept the Commission out of trouble and ensured that it was task oriented and used its newfound political influence sagaciously and appropriately. He was an early advocate that the US Memorial – it was not yet imagined as a Museum — to the Holocaust be built in Washington not in New York, secure in the knowledge that the Holocaust had something important to say to the American people, all Americans and not just the Jewish community. He was confident that would be accepted by visitors from Iowa and Idaho and not just from New York or Florida. His reward: he was appointed Vice-Chair of its successor body the United States Holocaust Memorial Council and was the architect of the passage of the legislation establishing the Council and pivotal in securing the land from the US Government upon which the Museum was built. He offered wise counsel and kept the project moving. He was an unsung hero in the creation of the United States Holocaust Memorial Museum working behind the scenes, making sure that Congressional support from forthcoming and enlisting the support of a most influential Congressman Sidney Yates who was chairman of a key subcommittee of the House Committee on the Interior.

Together with his wife Jill, Mark Talisman brought the “Precious Legacy” exhibition to the Smithsonian Institution, then seemingly the bastion of WASP culture in the United States and to museums throughout the United States. Precious Legacy was a pioneering display of Judaica confiscated – stolen – by the Nazis and shipped to Prague where it was intended to serve as the basis for the Museum to the Extinct Race. It was an exhibition of some of the finest Judaica from Central European Jewish communities and individuals brought to the heart of our nation’s capital to bear witness to a life that was extinguished and to a people and a tradition that were not. Once again, it reflected Talisman’s comfort as a Jew and as an American and his confidence that the American people were open to the Jewish experience, even on the most venerated soil of its Capital City.

For years Talisman taught a course for newly elected Congressmen and women at Harvard teaching them the ways of Washington. His advice was sought by Republicans and Democrats alike and he mentored many a young elected official. His role was enhanced by his professional assignment as head of the Washington office of the Council of Jewish Federations, at a time when the Federations were at their peak of power and actually shaped the American Jewish community. That teaching assignment was ended by incoming speaker Newt Gingrich who felt that Republicans should have their own orientation, their own schooling in the wars that were to be fought with their Democratic opponents. Much was lost by that loss of commonality, their ending of bi-partisanship and Talisman himself was never to be quite as influential.

Talisman’s garden in Chevy Chase was a marvel, the envy of many who thought they had a green thumb. His interests in music and art were deep, his knowledge vast. He was a loyal friend and an exceedingly generous mentor to many in Washington. Many a young person coming to Washington could have said “I got my job through Mark Talisman, my first one, my second one, perhaps even my third one and then if I could not make it on my own, I was not built for that town.”

Small in stature, he often joked that when he “came to Washington he was 6’2.’ This is a town that will cut you down to size;” but if truth be told Talisman was a giant of his generation, smart, wise, determined, hard-working, a proud Jew and proud American who served his people and his nation with talent and grace, loyalty and imagination.