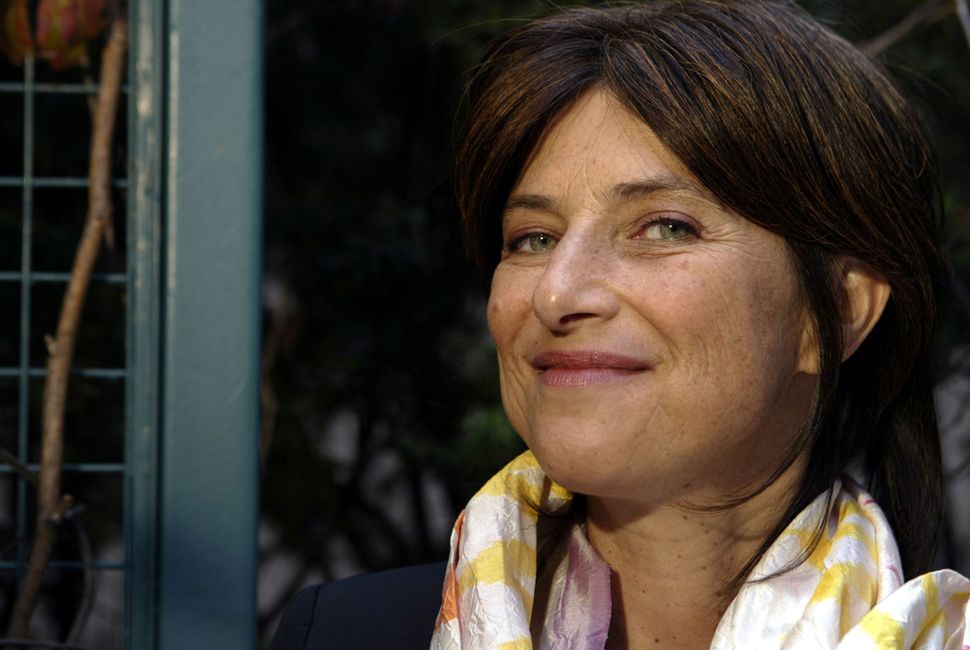 “What would keep me alive.”

It sounds like a question, but it’s not. Even if the punctuation mark were different, no answer would come into focus. It’s not quite a statement, either. The narrator, a woman in her sixties, states nothing — that would require certainty. She is painfully aware of living but has no idea how she continues to do so, or why. She knows the usual things people of her age are supposed to relish do not apply to her. No child or spouse or autumnal contentment, just a tough, cold what.

“My Mother Laughs,” the last complete book by the director Chantal Akerman, is full of whats and hows and whys that linger unanswerably in the memory. It is, ostensibly, “about” Akerman’s later years, when her mother Natalia was in poor health, but more often it seems to document a full lifetime of intense, devotional love and equally intense, devotional agony. The cover of the new, English-language edition, published by The Song Cave, features a photograph of the author in her twenties; even though I’ve glanced at it at least a hundred times in the last two weeks, I still forget that the grey object asymmetrically grazing her neck is a shirt collar, not a phantom hand. No matter how much I look, she’s fascinatingly askew.

The photograph has a lot in common with Akerman’s films. Between 1968 and 2015 Akerman directed some 48 works — describing them as documentaries or musicals or essay films is tempting but misleading. “Jeanne Dielman, 23, Quai du Commerce, 1080 Bruxelles” subjects its fictional protagonist to a degree of scrutiny rarely found outside of ethnographic documentary. It ends with a jolt worthy of “Dial M For Murder.” Seen through one eye, “News From Home” is a city symphony; through the other, a family drama. “Golden Eighties” contains Fosse-worthy musical numbers, and Holocaust allusions; “A Couch In New York” could be mistaken for a frothy Juliette Binoche rom com, save for its lengthy digressions on Lacanian psychoanalysis.

If these films refuse to be sorted into genres, it’s largely because of the way they were shot. To watch a Chantal Akerman film is to realize how heavily most directors rely on second-hand aesthetics — quirk-less clichés of the lens like “gritty” or “cold” or “lush” — and, on the other hand, how rewarding it can be to examine things closely, as if for the first time. There is no Akerman “look” in the same sense that there is a Fincher look or a Malick look. Her shots are specific to their subjects. They give us enough time to forget the way objects are supposed to look, and they give us the perspective we need to rediscover those objects, propelled by Akerman’s impeccable pacing.

Akerman’s is a slow, ruminative kind of filmmaking, and in almost anyone else’s hands the results would be unwatchably dull. One reason Akerman’s films inspire while the endless Akerman knockoffs coming out of undergrad film programs bore is that they’re built on a bedrock of sincere, unaffected feeling, with the result that their formal experiments and avant-garde flourishes seem as plain and natural as a Shaker table. Many of the best Akerman films — “Meetings of Anna,” “News From Home,” “No Home Movie” — study the relationships between mothers and daughters, tied together by affection and fear and incomprehension. Sometimes, the daughter is Chantal Akerman herself — throughout “News From Home,” she reads aloud from the letters Natalia wrote her while she was in New York, and footage of Natalia, recorded in the years leading up to her death at the age of 86, blossomed into Akerman’s final film, “No Home Movie.”

For all the biographical details scattered across Akerman’s films and books, strictly biographical interpretations of her work frustrated her. So did most interpretations. In a 2016 New Yorker article, the critic Richard Brody recalled a Q&A session during which Akerman was asked a long, jargon-heavy question. “Is that how to talk to your friends?” she snapped. Art, for Akerman, was partly a matter of demystifying her subjects — cutting through layers of cliché and academic mumbo-jumbo in order to reach the thing itself. Critics whose first instinct was to re-bury Akerman’s work, whether in French literary theory or simple-minded biography, were missing the point.

Make no mistake — biography is there in her work, even when it doesn’t assert itself right away. It’s there in “Jeanne Dielman” and “Golden Eighties,” and it’s there on every page of “My Mother Laughs” (not to mention the title). But biography does not and cannot explain Akerman. Rather than untangling her work, as it might a lesser artist’s, it reveals the tangles and contradictions that make her work hers and no one else’s.

Six years after it was first published, “My Mother Laughs” is haunted by two tragedies. One is the Holocaust, which left its filthy mark on Natalia Akerman, a survivor of Auschwitz, and on the rest of her family. The other is Chantal Akerman’s suicide on October 5, 2015, two months after the world premiere of “No Home Movie” and a year and a half after Natalia’s death.

You feel both tragedies in Akerman’s choice of words. Everyday phrases and figures of speech are tainted by what happened before and after Akerman wrote them down. “Everything makes me think about it again,” she observes, “even the words and things that might make you think of something else.” She’s talking about the grim vocabulary of the Holocaust survivor, the way innocent words like “smoke” or “Christmas” evoke the horrors that nearly killed her mother. But she might as well be talking about the experience of reading “My Mother Laughs”:

The noose is tightening.

I have to twist my neck.

I took some sleeping pills.

Of her old, pained dog, Akerman writes, “the veterinarian gave him an LSD shot so he could die happy, and we watched as he wound down little by little, and looked at us all happy, then he fell asleep forever.” Passages like this terrify because of what they might symbolize, but others are chillingly literal: “One day,” she recalls, “I even tried to kill myself but was smiling, pointedly not forgetting to smile, as if it were a gesture without consequences. Luckily it was, since I survived everything to date, and I’ve often wanted to kill myself. But I told myself I could not do this to my mother.”

This is a hard, bitter book, full of feelings most people lack the courage to acknowledge, let alone analyze with such care. Akerman’s arguments with her sister, her fierce, sometimes furious loyalty to her dying mother, and her bafflement with her own fame lead her to disturbing places. She begins dating a younger woman named C. who pushes her, screams at her, and punches her in the face. “She may have hit hard,” we’re told, “but I didn’t feel a thing.”

“My Mother Laughs” is also, to my mind, a hopeful book, by which I mean that its author was, for a long time, willing to endure enormous pain in order to go on living, and that she made art — book after book, short after short, feature after feature — in part to show that she was still here, still possessing of a life. Clouded by tragedy, the book nonetheless conveys a brazen, luminous brilliance, one that helped Akerman feel — again, for many years — that her life was worth living, and one that continues to make life seem worthwhile for admirers of her work. “I loved my mother so much when she was young,” she writes. “Her, her youthfulness, her beauty, her dresses.” The marvelously idiosyncratic genius of that insight (the way she makes existing into a quality, like beauty) can’t be separated from its underlying sense of despair. The same goes for “My Mother Laughs” and maybe for Akerman herself.

Her work is full of pain, but pain did not make her a great artist. She did not kill herself simply because she was waiting for her mother to die, though she gave us some reason to think so, and her mother’s death was certainly a factor. Akerman despised simplistic interpretations of her life’s work; it seems only right to steer away from simplicity when confronted with her death, as we are in “My Mother Laughs.” Her films’ place in the pantheon is already secure, but in her final book she left behind a bright, frightening intelligence that was always ready to examine the world, to examine itself, to double back, to attack, to repair, to erase.