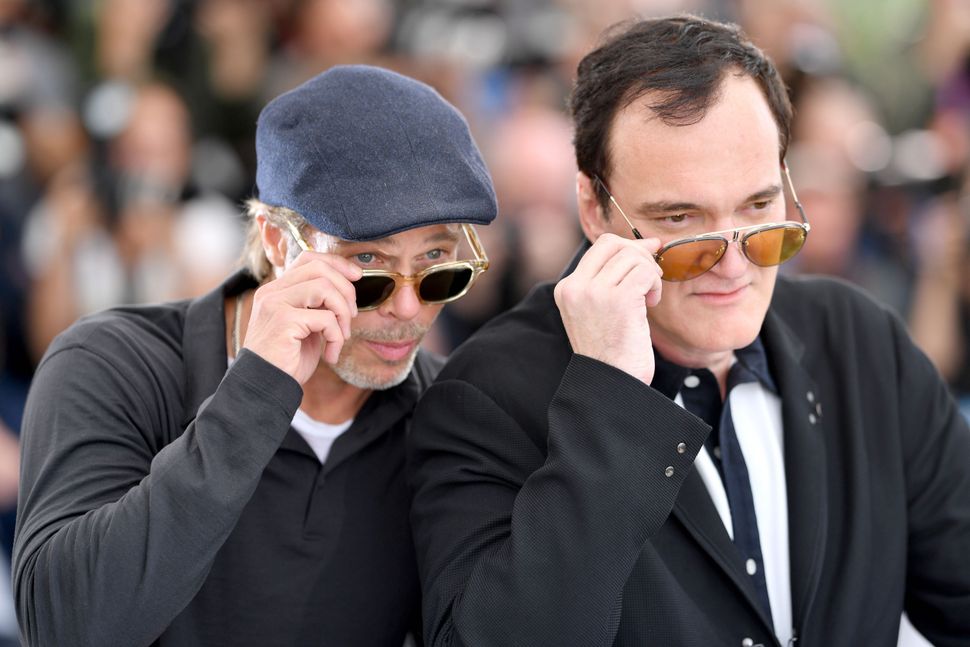 Quentin Tarantino’s “Once Upon a Time…In Hollywood” is upon us. And with its curious canonization of 1960’s Hollywood come a couple if curious choices as well. In the role of Hollywood agent Marvin Schwarz, we find none other than Al Pacino, who has made a late-career habit of playing Jewish characters (see also: Shylock in “Merchant of Venice” and Shelley Levene in the Broadway revival of “Glengarry Glen Ross”).

And, in the role of Roman Polanski we find the Polish actor Rafał Zawierucha. Fine with us, by the way — the more we keep Polanski’s religious upbringing out of the spotlight, the better.

But Tarantino’s casting of two non-Jewish actors in Jewish roles did get us to thinking about a topic that has been on our minds for a while: Which gentiles have given the best performances in specifically Jewish roles? Here’s our completely unbiased (and completely incomplete) list:

1. Charlie Chaplin as the Jewish Barber in “The Great Dictator” (1940)

One of the greatest films of all time in which Chaplin plays both a version of his signature Little Tramp character and the Tomainian dictator Adenoid Hynkel. Chaplin blends comedy and pathos with — in the film’s final speech — a needed glimmer of hope. For the record, we’re discounting unproven rumors about Chaplin’s possible Jewish heritage.

Perkins’s signature herky-jerky, nervous shtick had a hit-or-miss quality to it. He will be forever etched into moviegoers’ minds as the archetypal creep in “Psycho.” But he is remembered less fondly — if at all — for his impersonation of troubled ballplayer Jimmy Piersall in “Fear Strikes Out.” To our mind, his starring role as Franz Kafka’s persecuted hero in Orson Welles’s classic represents the pinnacle of his career.

Vittorio De Sica’s classic is, to our minds, one of the most beautifully made and understated films about the Holocaust. It is anchored by a slew of terrific performances, most notably Sanda’s.

Brian Cohen may not have made for a convincing savior, but Chapman’s understated turn as “the man who wouldn’t be Christ” elevated this Monty Python film to classic status. Clearly, the front-runner as chosen by the Judean People’s Front and the People’s Front of Judea.

A morally dubious and saccharine misappropriation of the Holocaust? Well, maybe, even though the story did have roots in Benigni’s family story. Still, Benigni’s portrayal of a Jewish bookstore owner is a comic tour de force. And even if it wasn’t, we’d still include it for the Italian actor-director’s walk to the stage to collect the Best Actor statuette during the Academy Awards, which ranks among the most entertaining moments in Oscar history.

Scarlett Johansson may have been the actress who became a star after Terry Zwigoff’s adaptation of Daniel Clowes’s graphic novel. But Birch’s endearingly dour take on Coleslaw (whose name is an anagram for Daniel Clowes) made this one of the best comedies of the early 21st century. Oh, and for the purposes of our discussion, we’re going to include this one despite the reports that one of Birch’s grandparents was apparently Jewish.

Apart from the terrific soundtrack, Todd Haynes’s meditation on the [Bob Dylan myth][4] seems more film school exercise than full-fledged film. Nevertheless, the performance Blanchett turns in as the Bard during his “Like a Rolling Stone” period marks the one segment where the film goes electric.

The rumor is that Harvey Weinstein was the inspiration for Cruise’s turn as a bald, bearded, loud-mouthed Hollywood producer who suggests a maniacal version of Christian Bale’s performance in “American Hustle.” Either way, this is one of Cruise’s most engaging comic roles, and even if much of the movie wasn’t totally worth the price of admission, the Les Grossman dance sequence certainly was.

9. Louis de Funès as Victor Pivert in “The Mad Adventures of Rabbi Jacob” (1973)

Well, he wasn’t playing a Jew as much as he was playing a bigot pretending to be a rabbi. Even so, the improbable international success of this insane caper was largely due to de Funès’s manic performance in the title role.

As one of the leading voices of New German Cinema, director Margarethe von Trotta has distinguished herself as one of the great interpreters of German history and culture. And, her collaborations with Barbara Sukowa seem every bit as significant to us as the one between, say, Martin Scorsese and Robert DeNiro.

This performance is as much about the hairpiece, the weight gain and the swinging ’70s outfits as it is about the character itself. But, whatever the reason, Bale is awfully convincing as David O’Russell’s con man who looks and acts just like the cousin you’d try to avoid at the next Passover.

12. Robert De Niro as Bernard Madoff in “The Wizard of Lies.”

Robert De Niro doesn’t really play Jewish characters that much anymore. Or specifically Italian ones. Really, De Niro plays De Niro whether the surname of the character he is playing is Rothstein (as it was in “Casino”) or Teleggio (as it was in the aforementioned “American Hustle”). The best he’s done lately in getting away from his laconic, squinty-eyed persona was his turn in HBO as Bernie Madoff. As we said earlier about Roman Polanski in “Once Upon a Time…In Hollywood,” maybe it’s better for non-Jews to be playing unsavory Jewish characters.

Leaving some names off this list was easy — John Turturro as Moe Flatbush in “Mo’ Better Blues” comes to mind. But there were too many to keep this as a simple 10. Score the last one as a tie.

Oh, and there should probably be an award for worst performance by a non-Jew playing a Jew. For now, we’ll go with this one.