The Secret Jewish History Of Woodstock 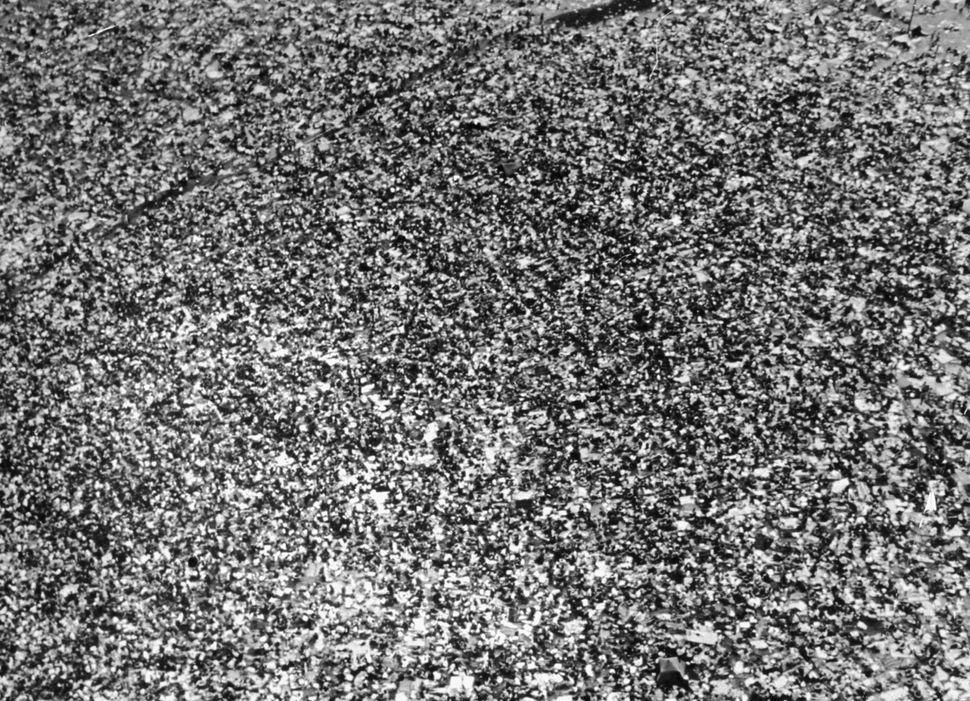 This August marks the 50th anniversary of the original Woodstock festival, which took place in Bethel, N.Y., on August 15-17, 1969. Woodstock lives on in memory as the culmination of the 1960s counterculture, the greatest rock festival of all time, and just plain and simply as shorthand for “the Sixties,” as in “the Woodstock generation.” It was also quite Jewish. In some ways, Woodstock was just a large-scale, Jewish Catskills pop-up, where the entertainment was rock ‘n’ roll instead of klezmer, the recreation was dancing naked in the mud instead of mahjongg, and the rooms lacked floors, ceilings and walls.

The quartet of Jewish men who created the original Woodstock Music & Arts Fair: An Aquarian Exposition, in White Lake, a hamlet of Bethel, N.Y., were promoter Michael Lang, who to this day remains the face of the festival, former record company executive Artie Kornfeld, and Joel Rosenman and John P. Roberts, two young financiers who at the time were scouting about for investment opportunities. Together they formed Woodstock Ventures, which would eventually become profitable: the festival itself was a monetary bust, but ancillary products, including the Woodstock film and soundtrack album, and licensing fees insured a perennial revenue stream.

After realizing there was no suitable site for the festival in Woodstock proper – the town was always a haven for musicians and artists, and some believe that the promoters wanted it to take place there in order to entice its most famous resident, Bob Dylan, out of seclusion – and having been denied a permit to stage the event in nearby Walkill, N.Y., the promoters finally made a deal with a Jewish dairy farmer named Max Yasgur to rent his 600 acres in Bethel. Yasgur’s farm just happened to be located in the heart of the Catskills’ Borscht Belt, about a dozen miles from Grossinger’s, one of the best-known Jewish summer resorts.

The promoters were aided by Elliott Tiber, the young president of the Bethel Chamber of Commerce president, whose parents owned a nearby motel. Born Eliyahu Teichberg in Brooklyn, where he attended yeshiva, Tiber already had a valid permit to stage an arts festival, which he transferred to the promoters, who made his parents’ motel their headquarters. (Tiber’s story is recounted in his memoir, “Taking Woodstock: A True Story of a Riot, a Concert and a Life,” upon which Ang Lee’s 2009 movie, “Taking Woodstock,” is based.)

Both Tiber and Yasgur caught flak from a certain element of the local population who were unhappy about the prospect of having hordes of long-haired hippies in their backyard. And that element reacted in a timeworn manner – with anti-Semitic vandalism. Tiber wrote about how Nazi swastikas and anti-Semitic epithets were spray-painted on his parents’ motel on a nightly basis. Yasgur, who was a hardcore Republican and a supporter of America’s war in Vietnam, quickly became a pariah and the subject of a boycott; a sign reportedly went up reading, “Don’t Buy Yasgur’s Milk, He Supports the Hippies.”

There were equally as many Jewish contributions to Woodstock onstage as there were off. The list of Jewish performers includes Country Joe and The Fish, who gained notoriety at Woodstock stemming from their expletive-laden “Fish Cheer,” in which the spelling of the word “fish” was replaced by the spelling of a different four-letter word beginning with “f.” Country Joe’s mother, Florence Plotnick, was the daughter of Russian Jewish immigrants. She and her husband were both Communist Party members before renouncing the cause, but not before naming their son after Joseph Stalin. In real life, The Fish was Brooklyn-born guitarist Barry Melton, whose maternal grandparents fled Odessa in 1914 for the promise of streets paved with gold in America.

Folk singer-songwriter Bert Sommer – who grew up on Long Island and in Westchester, where he became a bar mitzvah – turned in a rousing performance, which included a rendition of Simon and Garfunkel’s “America.” Sommer, incidentally, was in the original cast of the Broadway musical Hair, and it was indeed Sommer’s hair – a veritable Jewfro – that appeared on the playbill for the musical.

Hollis Hills, Queens-native Al Kooper (born Alan Peter Kuperschmidt) laughs these days about having missed what would have been his biggest gig ever if not for the fact that he quit his band, Blood, Sweat & Tears, one year earlier. The group, however – sometimes lovingly referred to as Blood, Sweat & Jews – boasted a handful of Jewish musicians, including Bobby Colomby, drums; Jerry Hyman, trombone; Steve Katz, guitar, harmonica, vocals; Fred Lipsius, alto sax, piano; and Lew Soloff, trumpet and flugelhorn.

Sha Na Na, an oldies (which in 1969 meant the 1950s) group that emerged out of a Columbia University a cappella ensemble, was helmed by Alan Cooper, who went on to pursue an academic career and became a Biblical scholar. He now serves as the Elaine Ravich Professor of Jewish Studies and provost at the Jewish Theological Seminary of America. In addition to guitarist Elliot Cahn and singer Rich Joffe, the band also included Henry Gross, who at age 18 was the youngest performer on Woodstock’s main stage. Gross attended an Orthodox Jewish day school and as a teenager performed at resort hotels in the Catskills. Later in his career, Gross gained solo fame after recording a song he wrote about the death of former Beach Boys member Carl Wilson’s dog, Shannon. Gross also named his record label, Zelda Records, after his mother. (I know; you’re kvelling all over; such a nice Jewish boy!) In later years, Jon “Bowzer” Bauman was Sha Na Na’s best-known vocalist, but he hadn’t joined the group as of Woodstock.

And while Bob Dylan turned down offers to perform at Woodstock – he actually left town on August 15, sailing on the QE2 to England, where he came out of seclusion and performed with the Band at the Isle of Wight Festival at the end of the month – he was still a presence there via his songs. Joe Cocker played three Dylan songs (“Dear Landlord,” “Just Like a Woman,” and “I Shall Be Released”) as did The Band (“I Shall Be Released,” “Tears of Rage” and the Ezekiel-inspired “This Wheel’s on Fire”). Melanie sang “Mr. Tambourine Man,” and Joan Baez also sang “I Shall Be Released.”

And with food hard to find at Woodstock by the time an astonishing 400,000 or so concertgoers showed up, members of the nearby Monticello Jewish Community Center rallied to provide thousands of sandwiches to festivalgoers. You can just hear them as they wandered the grounds handing out bologna and PB&Js: Esn, esn, mayn kinderlekh.

The Secret Jewish History Of Woodstock