Seven Decades Later, A Violin – And Its Story Of The Shoah – Finds Its Way Home 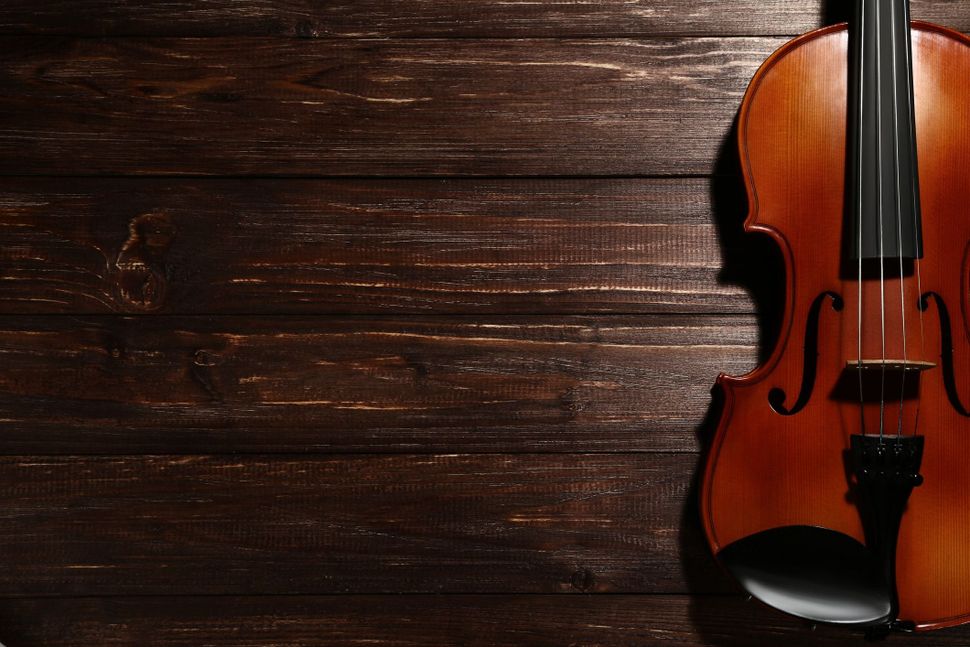 A violin Image by iStock

In 1943, with the Nazi deportation of Amsterdam’s Jews well under way, Bram Rodrigues and his father, Marcel, decided to flee the Netherlands. But before they left, Bram, who was 18 at the time, visited his friend Johnny de Haan, and asked him for a favor.

Bram gave Johnny his violin — his most prized possession — and asked him to look after it while he was gone. Bram never returned; he was captured at the Belgium border and deported to Auschwitz where he and his father were murdered. 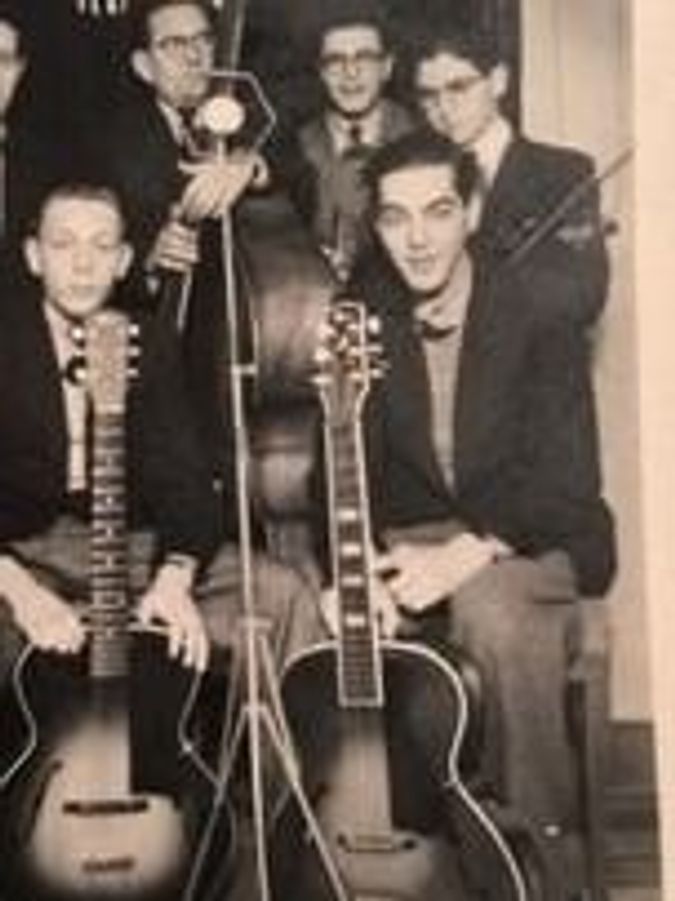 But Bram had a sister, Sipora who remained behind, living in the nurse’s quarters of the Nederlandse Israelitische Ziekenhuis, the Jewish hospital where she worked. She later hid for 16 months in the Dutch countryside, protected by a couple named the te Kieftes until the end of the war.

Sipora survived and made her way to America and raised a family. But her memory of the war and Bram remained, and in 2012, her youngest son, David Groen, published “Jew Face: A Story of Love and Heroism in Nazi-occupied Holland,” a book about her life during the war. Within days of the book’s release, Johnny de Haan died, leaving his son, Wim de Haan, his home in the Netherlands.

Seven years passed and, on March 20, 2019, Groen received a message on Facebook.

“Dear Mr. Groen,” the message read, “Might you be the closest living relative to Bram Rodrigues born 15 October 1924 and died in Auschwitz in 1943? Bram was a very close friend to my father.”

“I immediately knew it was my uncle based on the information,” Groen told the Forward. “It all matched up perfectly, there was no question.”

Taking stock of his father’s possessions at his home in the beach resort town of Bergen aan Zee, Wim de Haan found a Gibson guitar, a Dutch-made violin and a diary. The guitar was his father’s and, he learned from the diary, the violin was Bram’s.

Johnny de Haan’s diary spoke of Bram, whom he played in a band with, a number of times. Johnny wrote of their New Year’s Eve serenade of Sipora – whose birthday was New Year’s Day – which bridged the wartime years of 1941 and 1942. But Bram’s last name was only mentioned once in de Haan’s diary, in an August 1941 entry, where de Haan wrote his friend Bram Rodrigues was forbidden from attending school because he was Jewish.

While de Haan had sat with these possessions for years, it was only in March of 2019 he spotted Bram’s last name and decided to see if he might have living relatives.

Wim de Haan found Bram’s full name on Groen’s website, Holland’s Heroes, in a post with every name mentioned in “Jew Face.” De Haan reached out to Groen for confirmation and, on Purim 2019, a day after his Facebook message, sent the following email:

“I mentioned that I mounted my fathers Gibson against the wall,” de Haan wrote. “After reading the diary I felt that those two instruments belonged together. Therefore I intended to mount the violin next to the guitar, but now I ran into you, together with your brothers and sisters the inheritor of the violin.

Well David, this is my story, the story of my father and his good friend Bram.”

The story was one of close companions, who had played in a band during their teen years — in typical teenage fashion, the band’s name changed many times. It was a story of war. And, for one of the boys, a story of displacement and death. But 76 years later, the story appeared to have a new ending.

“We were all absolutely amazed,” Groen said of his family’s reaction. “It was out of nowhere. We’re talking about all these years later. You would think if it was going to happen it would happen sooner than this.”

Wim de Haan wanted to return the violin – asking for nothing in exchange – but Groen believed the circumstances demanded more ceremony.

On Sunday, July 21, in the Watergraafsmeer neighborhood in Amsterdam, where Bram and Johnny grew up, a crowd of 55 people assembled at Huize Frankendal, a 17th century castle, to witness the return of the violin. In attendance were diplomats, including Nina Staretz, the minister counselor at the Israeli Embassy, David Simon, Chairman of Friends of Yad Vashem in Holland and Peggy Frankston of United States Holocaust Memorial Museum in Washington, DC. 12 descendants of the te Kiefte family, that hid Groen’s mother, also attended. A production company filmed the proceedings for a documentary on Bram’s story. 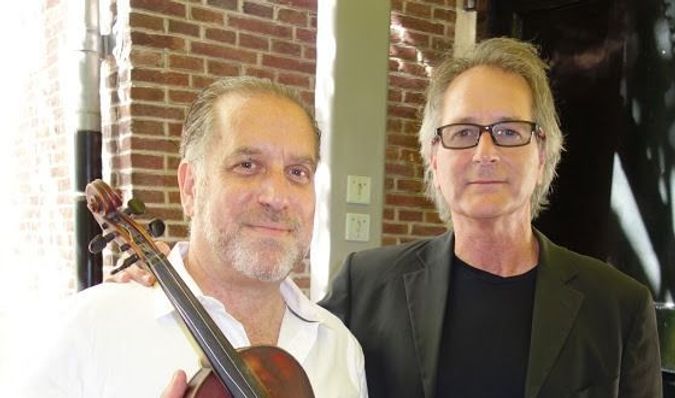 Groen was the master of ceremonies. The event began with recordings of Hatikvah and the Dutch national anthem, both played on the violin. A rabbi friend of Groen’s from Philadelphia performed an invocation and Groen told the story of Bram, his violin and his friend Johnny, the instrument’s caretaker for almost 70 years. It’s a story Groen will include in a new book, which he hopes to finish before the year is out.

Until the violin appeared, Groen said, Bram was his mother’s brother, a soft-hearted boy who lost his own mother at 10. But with the artifact, with the story — he became something more: his uncle. Groen addressed him as such in a letter he read at the ceremony.

“When Johnny’s son Wim sent me the email telling the story of you and his father and how you asked him to look after your violin, something he did with commitment and purpose even through the tragedy of your death, I knew then that your choice of friends was better than good, it was perfect,” Groen’s letter read.

Before de Haan returned the violin, a teenage boy came before the audience to play it. 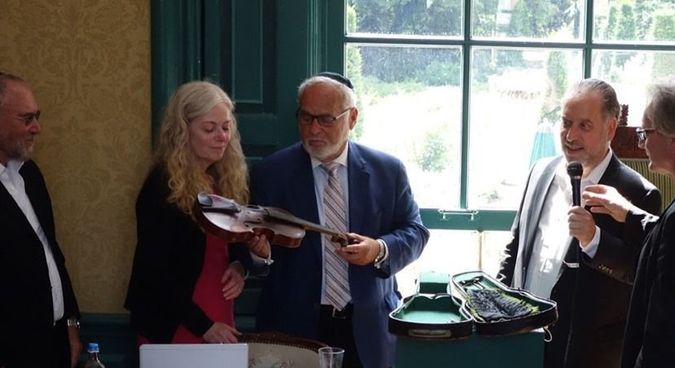 Bram Rodrigues’s violin is returned to his relatives during a ceremony July 21, 2019 Image by Courtesy of David Groen

“He was almost the same kind of kid as my uncle,” Groen said.

Now, Groen has the violin, and keeps it in a case within a case at his home in Oceanside, New York. The instrument itself doesn’t appear to be anything special — it’s awaiting an appraisal. While monetarily Bram’s most prized possession may not be worth much, Groen said “the sentimental value is priceless.”

Seven Decades Later, A Violin – And Its Story Of The Shoah – Finds Its Way Home