The Secret Jewish History Of The Village People 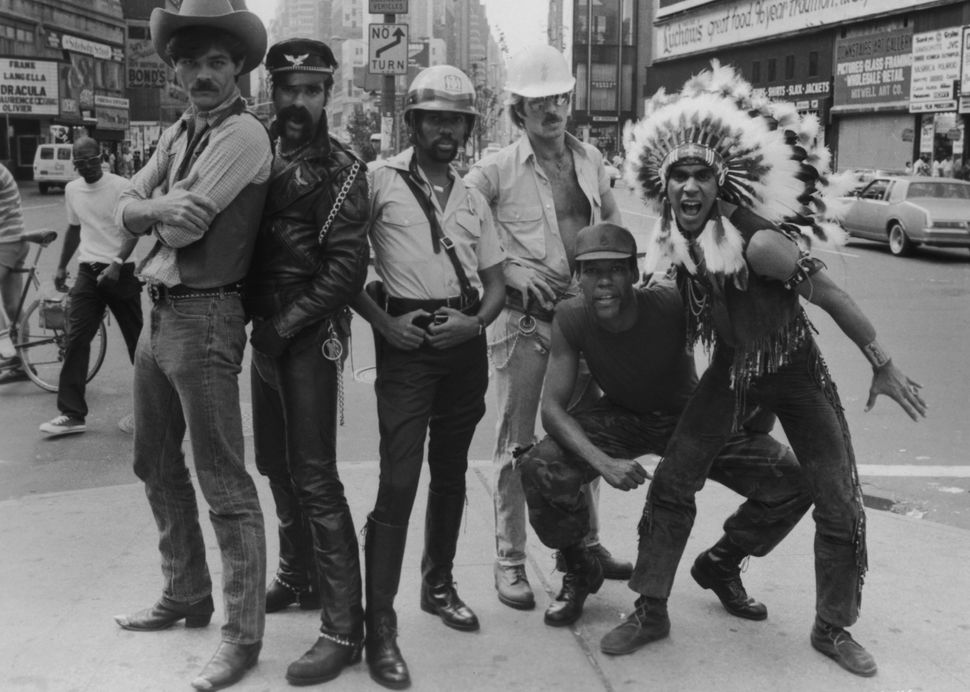 The Village People, circa 1980 Image by Getty Images

The French music entrepreneur Henri Belolo, of Moroccan Jewish origin, died on August 3 at age 82, reminding us how a melting pot of cultures in the Old and New Worlds has inspired émigré Jews through the generations. Belolo is best remembered for forming the American group Village People in the twilight of the disco era, whose hits “YMCA” (1978), “Macho Man” (1978), and “In the Navy” (1979) left an imprint on American Jewish pop culture.

In 2002, when Hershal Herscher, founder of the Jews Brothers music ensemble, was hired to celebrate the opening of the Cherry Hill Community Kollel in New Jersey, he chose as tribute to this center for research on Jewish law and practice to play klezmer-inflected parodies of “YMCA” and “Macho Man.”

No less decisively, Jeanie Linders, the American Jewish author of “Menopause the Musical,” included a parody of the Village People’s “YMCA” in it, according to theater historian Dan Dietz. The result is an enduring stage favorite for Hadassah and Jewish community center benefits, as well as international productions, including one at the Haifa Municipal Theater in 2007.

Of course, “YMCA” is also heard at weddings and bar mitzvahs, leading Roger Bennett, co-author of “Bar Mitzvah Disco” to hyperbolically inform “Spin Magazine” in May 2008 that it is the “single most important song to hit the Jewish religion since ‘Hava Nagila.’” Bennett further claimed that the diversity of costumes worn by the Village People, as an Indian, cowboy, construction worker, and so on, showed Jewish teens that despite parental advice, other careers and identities were open aside from being doctors or lawyers.

Naturally, bar mitzvah boys had no need of lessons from the Village People to realize this, but Henri Belolo’s inspiration was an example of how juxtaposing dissimilarities of the kind experienced in his Moroccan Jewish community could lead to innovation.

Born in Casablanca in 1936, Belolo heard music on American military radio stations in the 1940s, including Glenn Miller’s big band hits. He also relished local Gnawa music, Moroccan versions of African Islamic religious songs. The soupy “Moonlight Serenade” had nothing in common with alert Gnawa rhythms, but when Belolo journeyed to America decades later to make his fortune, he must have kept in mind an ideal about how apparently irreconcilable differences may add up to musical delight.

Belolo teamed up with Jacques Morali (1947–1991), another Frenchman born in Casablanca, whose family name, according to the French ethnographic journal “Terrain,” is also likely of Jewish origin, since Jews typically adopted names based on geographic origin. Belolo’s previous work in the Paris music industry had included producing albums by the star Georges Moustaki, of Greek Jewish roots. Belolo also reveled in Parisian nightlife at Régine’s celebrated club, owned by Régine Zylberberg, of Polish Jewish origin.

Yet Belolo’s real career advance would be in America, where tagging along with Morali to New York’s gay niteries, he once saw a dancer entering a bar dressed as a Native American, gyrating in front of a customer dressed in cowboy garb.

This epiphany, according to Belolo’s semi-fictionalized accounts in different interviews, relied on the conjunction of two American archetypes meeting in a gay bar, witnessed by two Moroccan Jews looking for a main chance in the New World. The moment was fraught with cultural complexity and contradiction somehow parallel to that of émigré Yiddishkeit.

Belolo and Morali managed to sell the idea of the group to Casablanca Record’s American Jewish founder Neil Bogart (1943 –1982), whose own trajectory, as recounted by biographers Josh Levine and Larry Harris has led to a biopic-in-progress, “Spinning Gold.” Bogart was enchanted that the two Frenchmen were natives of the city he had named his company after.

Belolo was also an aficionado of Philadelphia’s pop music scene, where another melting pot operated. In Philly, African American, Italian American, and Jewish musicians collaborated harmoniously. Belolo particularly admired the guitarist Bobby Eli (born Eli Tatarsky), founding member of the Philadelphia studio band MFSB an acronym for Mother Father Sister Brother, a mishpocheh-minded musical venture if ever there was one.

How representative of this ideal cultural mix were Belolo and Morali’s creation, the Village People? Opinions still differ. Disco historian Peter Shapiro disdainfully remarks that “if disco had a nadir, it was unquestionably the Village People. The Village People represented everything uncool about disco: the stale beats seemingly phoned in by studio hacks, the dunderheaded English-as-a-foreign-language lyrics, the complete lack of subtlety, all delivered by guys wearing a Native American headdress and a loincloth, a construction worker’s clothes, a police uniform, and leather biker gear… To top it all off, they were the product of the imaginations of the French.”

Shapiro posits that Belolo and Morali were not creating endearingly bad, self-conscious camp because being French, they really thought that derivative rock stars like the Belgian-born Johnny Hallyday were good. Such critics tend to exaggerate a certain outrage because the hypermasculine caricatures of the Village People as dreamed up by Belolo and Morali soon enchanted American sporting institutions such as baseball, as described by the sports writer Ken McLeod. And after intial uncertainty, the Young Men’s Christian Association (YMCA) appreciated the free publicity, taking the song’s lyrics at face value without any apparent clue about their original context or allusive meaning.

Even so, gender historian J. D. Gustav-Wrathall notes that the Village People were no pioneers in implying that some YMCAs were loci for diverse sexual expression; Rae Bourbon, a Texan-born female impersonator, had previously recorded a more explicit number, “Queen of the YMCA.”

Such overt assertions were naturally unacceptable to the wider public, and the sociologist Martin Levine, author of “Gay Macho” suggests that “traditional masculine themes were heartily embraced—in part as a new kind of camp (as in the various over-the-top displays of gay disco groups like The Village People).”

By contrast, music historian Alice Echols faults the Village People for presenting “urban gay macho identities as banal media products.” American gay audiences quickly became disenchanted with the group after its mainstream, un-marginalized acceptance. By selling to the mass market, did Belolo and Morali betray the cherished minority status of the group, banishing initial associative echoes of Yiddishkeit? Peter Shapiro states that eventually, the Village People “got most of their play at aerobics classes for senior citizens who could form the letters Y, M, C, and A with their arms without taxing their bodies too much, at barbecues by car mechanics who thought ‘Y.M.C.A.’ was about playing basketball, at straitlaced high school proms in Kansas, and at children’s playgroups.”

In a more nuanced, less vehement argument, the musicologist Judith Peraino concludes that the group’s success “can be read in retrospect as a supreme joke on conservative Middle America—a great gay hijacking of suburbia — if we neglect the processes that attend that success, namely the public relations program that vigorously straightens out the ample gay codes in their songs, and the inherent misogyny that allies gay and straight macho men.”

That this potentially nonconformist message emanated from Moroccan-born French Jews can hardly surprise any fan of the group’s pop songs.

The Secret Jewish History Of The Village People