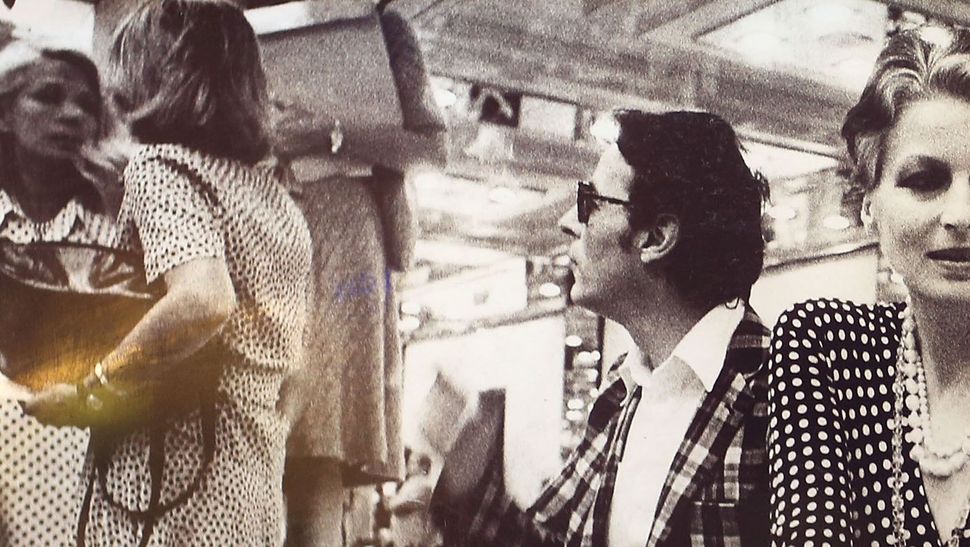 The Oscar-winning Italian costume designer Piero Tosi, who died on August 10 at age 92, proved that even the most storied showbiz careers can include unrealized projects that provide a tantalizing glimpse at lost opportunities.

The Florence-born Tosi, once described by the essayist Alberto Arbasino as “modest to a pathological level,” had much to be proud of. He worked with Italy’s most acclaimed modern directors, including Luchino Visconti, Federico Fellini and Pier Paolo Pasolini. In more recent years, he was a fount of information for historians about modern film and stage creativity. It’s due to his conversations with the film scholar Hava Aldouby that we know, for instance, of the visual inspiration Fellini drew from the Romanian Jewish artist Saul Steinberg and Roland Topor, the French artist of Polish Jewish origin.

During his decades-long career, Tosi particularly excelled in creating the visual detail needed for historical costumes in such epics as Visconti’s “Senso” (1954), “The Leopard” (1963) and “Death in Venice” (1971). 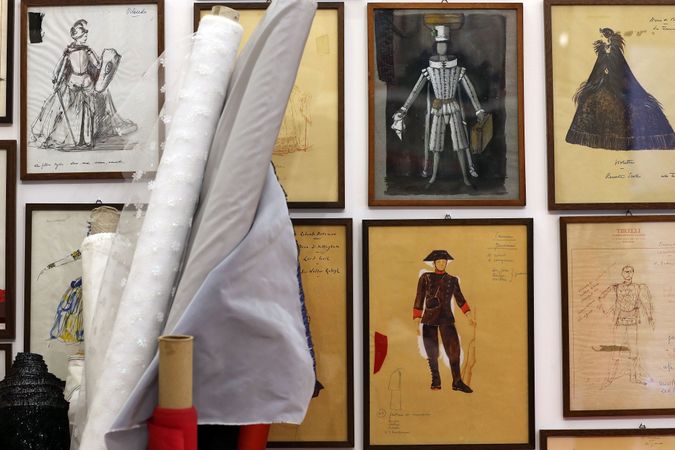 Costume designs by Piero Tosi at a Rome exhibit on February 20, 2015. Image by Franco Origlia/Getty Images

Tosi’s designs for films were also often humorous, as in the unlikely project “After the Fox” (1966) written by Neil Simon, directed by Vittorio De Sica and starring Peter Sellers. Simon would later recall that this unusual mix of ingredients led critics to treat this film as if it were the “work of a Chinese cook making an Italian dinner for a Jewish family.” In the film, a swindler posing as a film director (Sellers) convinces a has-been American screen idol (Victor Mature) to star in an avant-garde film. Tosi dressed Mature in outsized costumes — prefiguring the big suits that David Byrne of Talking Heads would popularize a generation later — in blinding shades of yellow, signaling his character’s braggadocio. Those costumes, as well as the clashing primary colors in which Tosi garbed Sellers, complemented the sometimes caricature-like effects of Simon’s first screen comedy.

In contrast to this mocking vulgarity, Tosi added surprisingly refined visual elements to “The Night Porter” (1974), written and directed by Liliana Cavani, about a Holocaust survivor who meets a former Nazi torturer in a hotel in 1957 and hopes to recapture the sadism of their former relationship. Critic Roger Ebert slated the result, writing that “The Night Porter’ is as nasty as it is lubricious, a despicable attempt to titillate us by exploiting memories of persecution and suffering. It is (I know how obscene this sounds) Nazi chic.” Tosi’s sleek leather designs for the film, while true to the self-consciously kinky themes of the movie, were atypical of his overall accomplishments. Steeped in the historical vocabulary of design, Tosi’s work, as in Visconti’s “Leopard” and “Death in Venice,” often tenderly evoked past eras.

That was true both of Tosi’s film catalog and his magical, transformative work for the operatic stage, where he and Visconti brought new life to works that could seem like dusty relics. For a Leonard Bernstein-conducted 1955 production of Bellini’s “La Sonnambula” (“The Sleepwalker”) at La Scala in Milan, Tosi provided Maria Callas, in the lead role of an unpretentious village girl, with a graceful, simple form-fitting white dress and humble crown of flowers. But at the opera’s end, when Callas’s character was united with her beloved, Tosi gave her elaborate jewelry to express her ecstasy, an allusion to the ornate traditions of opera designs a century prior. 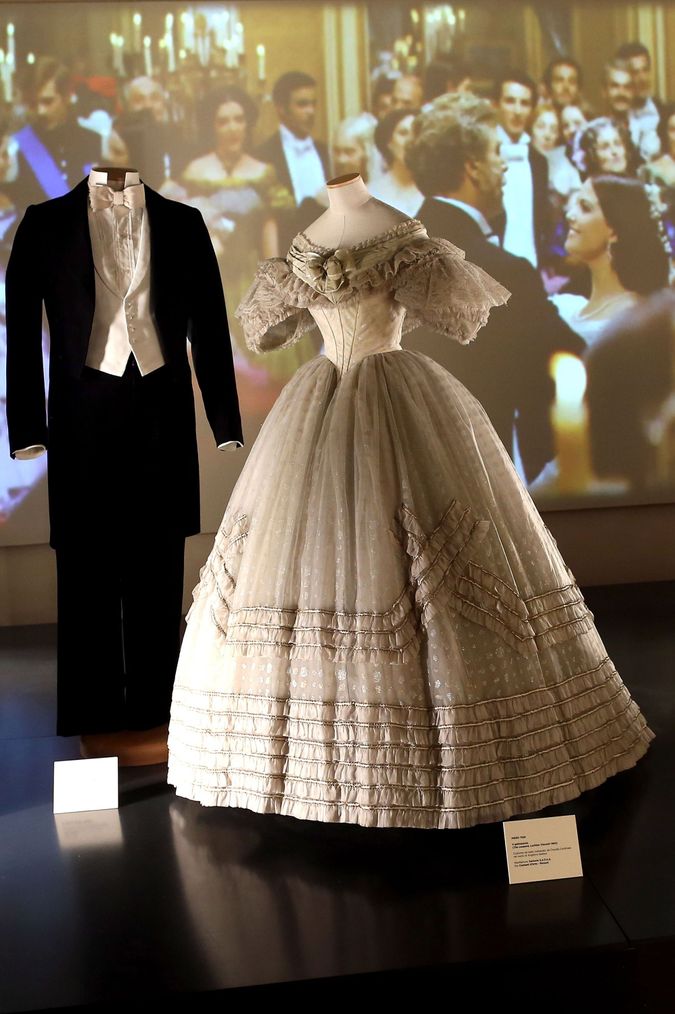 Costumes designed by Piero Tosi for Luchino Visconti’s ‘The Leopard,’ displayed in Rome as part of the 2015 exhibit ‘I Vestiti Dei Sogni.’ Image by Franco Origlia/Getty Images

Yet despite these and other achievements, Tosi’s never-completed projects are some of his most alluring legacies. The Corriere della Sera newspaper headlined Tosi’s obituary “The Costume Designer Who Said ‘No’ to Kubrick…” Indeed, the American Jewish director Stanley Kubrick sought to hire Tosi for “Barry Lyndon” (1975), his adaptation of W.M. Thackeray’s novel of the same name. Tosi later informed interviewers that although the offer was tempting, Kubrick warned that he was “used to having the best in the world by paying the minimum.” Accustomed to more lavish budgets, Tosi declined. Later, he said, he was glad to watch “such a masterpiece” without having to struggle through producing top visual effects on a shoestring budget.

An even more enticing possibility arrived in the early 1970s, when the Swedish film director Ingmar Bergman cast Barbra Streisand in an adaptation of Franz Lehar’s operetta “The Merry Widow” and hired Tosi to do the costumes; plans for the film were officially announced by SF Studios, a Swedish film production company, in late 1972. Bergman had first become aware of Streisand in 1971 when he directed her then-husband Elliott Gould in “The Touch,” in which Gould played an American Jewish archaeologist. As if Streisand weren’t enough star power for the project, Bergman enlisted Stephen Sondheim to hone the English lyrics for “The Merry Widow,” the original libretto for which is German.

How did such a promising project fall apart? Steve Swayne, author of the study “How Sondheim Found His Sound,” attributes the project’s eventual collapse to “Bergman’s tax and political problems.” By contrast, film historian Birgitta Steene asserts that preparatory talks for the film stalled “when Bergman became miffed at what he termed Streisand’s primadonna response.” Tosi himself would later state in interviews that during one phone conversation with the director, Streisand mentioned that the second part of Bergman’s screenplay could benefit from revision, a comment that, according to Tosi, caused Bergman to hang up the phone.

Yet there may have been other strains in the Streisand-Bergman alliance. As Bergman biographer Geoffrey Macnab noted in “Ingmar Bergman: The Life and Films of the Last Great European Director,” Bergman admitted to having had an enthusiastic affiliation with the Nazis, beginning in 1936 when, at age 18, he attended one of Hitler’s rallies in Hamburg, Germany. He maintained that affiliation through the war years, only renouncing it in 1946 after he learned fuller details of the concentration camps. Bergman even told the historian Maria-Pia Boethius: “The Nazism I had seen seemed fun and youthful. The big threat were the Bolsheviks,” a comment so grotesque it sounds like a spoof from Mel Brooks’ “The Producers.”

Yet rather than discord between a Jewish diva and a onetime Nazi, cinema historian Frank Gado wrote in “The Passion of Ingmar Bergman” that the reason “The Merry Widow” failed was that the affiliate producer Dino de Laurentiis demanded that SF Studios would have to pay for the entire film if it went over budget, a condition the Swedes were unwilling to accept. And so Tosi’s designs for Streisand as the Merry Widow never made their way to the screen. Intriguingly, in 1981, the American Jewish lyricist Alan Jay Lerner was approached to write the screenplay and lyrics for another version of “The Merry Widow” starring Streisand. That venture also foundered, and neither Bergman nor Tosi were attached to the project.

Piero Tosi’s designs for films made him a legendary costumier, among the most expressive of film history. Devotees of Kubrick and Streisand may still feel that his achievement could have reached new levels had his projects with those luminaries worked out, but as it is, his legacy is unsurpassed.