Remembering The Wisdom Of Sol LeWitt 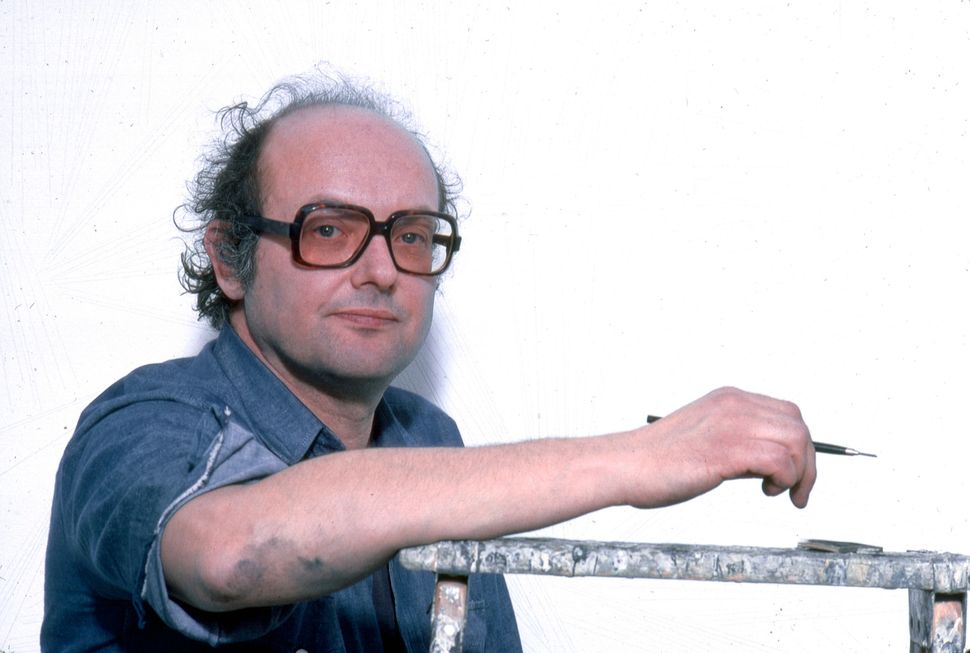 Sol LeWitt was born on this date in 1928. In honor of that occasion, we’re reprinting our interview with the late artist, originally published in the Forward on March 15, 1996

“Ask me any question you want and then put it in your own words,” says Sol LeWitt brightly over the phone from Manhattan, where he is spending a snowy day away from his home in rural Connecticut.

His easygoing nonchalance is a bit of a surprise — this is an artist who grants few interviews and refuses to have his photograph published in the press. “A very shy man,” warns the public relations officer, sotto voce, at the Museum of Modern Art, where a retrospective of Mr. LeWitt’s print work is on view through May 7.

What is not a surprise, however, is the level of deep contemplation that Mr. LeWitt, for three decades one of America’s most prolific and celebrated Conceptual artists, brings to even a small thing like a 45-minute talk with a journalist. “I’m not particularly fond of interviews,” he says gently. “It’s the form — when you say a word or a phrase or a sentence, and then you see the way it’s written, without the inflections and nuances that spoken language has … it’s dead on the page. Of course,” he offers, like a kindly professor attempting to guide a student through a complicated hypothesis, “written language is also valid in its own way.”

Such recognition of the possibilities and limitations of language has been at the heart of Mr. LeWitt’s work since he first gained acclaim in the art world in the mid-’60s. Although he’s worked in a variety of media, his legacy is less in the sculptures, paintings or prints he has created than in the ideas he has pursued — which is why he is considered the grand old man of American Conceptual art.

Viewers unaccustomed to Mr. LeWitt’s brand of Conceptualism might be forgiven for thinking his show would not hold aesthetic pleasures. “I don’t know if people find Conceptual art daunting or not,” he says. “People understand only what they can understand. I mean, there’s some very beautiful poetry written in Chinese, but if you don’t understand Chinese you’ll never be able to really read it. Looking at art is like learning a language — what I try to do is make the idea as beautiful as possible, to have the work make sense, have a meaning in itself that can be thought of as harmonious or beautiful.”

What is striking even for longtime fans of Mr. LeWitt’s work is how luxurious and visually compelling the prints are. Ranging from simple and elegant black-and-white geometric structures with bits of explanatory text describing the “system” used to create them — “Straight lines in four directions and all their possible combinations” — to richly colored blocks, stripes, undulating lines and dynamic starbursts, printed in deep blue, violet, warm yellow and scarlet, the works are hung salon style, covering the walls of the small print room on the museum’s second floor.

Despite their emphatic physical presence as objects, Mr. LeWitt’s prints are very much part of his overall conceptual program, according to Wendy Weitman, an associate curator of prints and illustrated books at MoMA who organized Mr. LeWitt’s show. “Here’s a man who has always worked with systems and he has taken the printmaking medium and made it another component of his ‘system,’” she says, “which tells you a lot about the kind of mind you’re dealing with.”

While extremely intellectual, Mr. LeWitt is hardly off-putting, she says. Well-known in the art world is the story of how, after his 1978 MoMA retrospective, he made an edition of prints as gifts for staff members, including art handlers, who had worked on his show — an uncharacteristic gesture for most major artists but, according to Ms. Weitman, completely in line for Mr. LeWitt. “He’s soft-spoken and generous,” she says.

Mr. LeWitt was born in 1928 to Abraham and Sophie LeWitt, Russian immigrants, and grew up in Connecticut. He attended Syracuse and then enrolled in the U.S. Army, which sent him to Japan and Korea. He used the opportunity to study Asian shrines, temples and gardens. He moved to New York in 1953 and settled into a studio at 117 Hester St. (looking out to the old Forward building on East Broadway). He currently lives in the Connecticut countryside, where he produces his prints, large gouaches and the wall drawings with which he is most often associated these days.

Mr. LeWitt’s artistic development began, appropriately enough, at MoMA, where he worked at the information and sales desks as a young artist alongside other now-major figures such as artists Dan Flavin, Robert Ryman and Robert Mangold. Mr. LeWitt credits a visit to Mr. Flavin’s studio with inspiring an artistic breakthrough. “I saw his first fluorescent pieces,” he recalls, “and my mind was sent off into a new direction, one which dealt with systems and ideas, and all kinds of worlds opened up. The idea became much more important than the actual form of the object — then you were involved with ideas as ideas, ideas as language, language as ideas, language as form, form as ideas, form as art, language as art … ” The form these explorations first took was consonant with the stripped down, minimalist qualities that characterized much of the art being made at the time, responding as it was to the gestural excesses of the by-then-faltering Abstract Expressionist style that had dominated American art since World War II. Yet if his objects shared a physical appearance with Minimalist work, Mr. LeWitt was at pains to distance himself from the absolutist, reductionistic ethos of its philosophical groundings, embodied by the Formalist critique of theorist Clement Greenberg. Formalism posited the artwork as a kind of blank slate from which all evidence of the outside world was to be emptied, leaving only the pure transcendent experience of paint on a surface.

Mr. LeWitt’s reply to this position was his “Paragraphs on Conceptual Art,” published in Artforum in 1967. In the text, now considered seminal in the development of Conceptual art, Mr. LeWitt satirizes the art world’s fascination with Minimalist reductions:

Recently there has been much written about minimal art, but I have not discovered anyone who admits to doing this kind of thing. There are other art forms around called primary structures, reductive, rejective, cool and mini-art. No artist I know of will own up to any of these either. Therefore, I conclude that it is part of a secret language that art critics use when communicating with each other through the medium of art magazines.

Thinking back on these early writings, Mr. LeWitt feels that what he wrote (“in self-defense,” he mischievously protests) was meaningful. “The important thing about the work was that the idea became the important thing, not the form,” he says. “Most critics could only conceive of things in a formal sense. They were saying, ‘What you see is what you get.’ What I wanted to say was, ‘What you think is what you get.’ ”

Now in his late 60s, Mr. LeWitt continues to work every day and says he has no intention of slowing down. “I always just do it,” he says about making his art. “I don’t even think about it. The idea of taking a vacation is abhorrent to me. I like to read, but I do a fair amount of that anyway. The idea of going on a cruise ship would drive me crazy.”

Mr. Kastner is a writer living in Boston.

Remembering The Wisdom Of Sol LeWitt