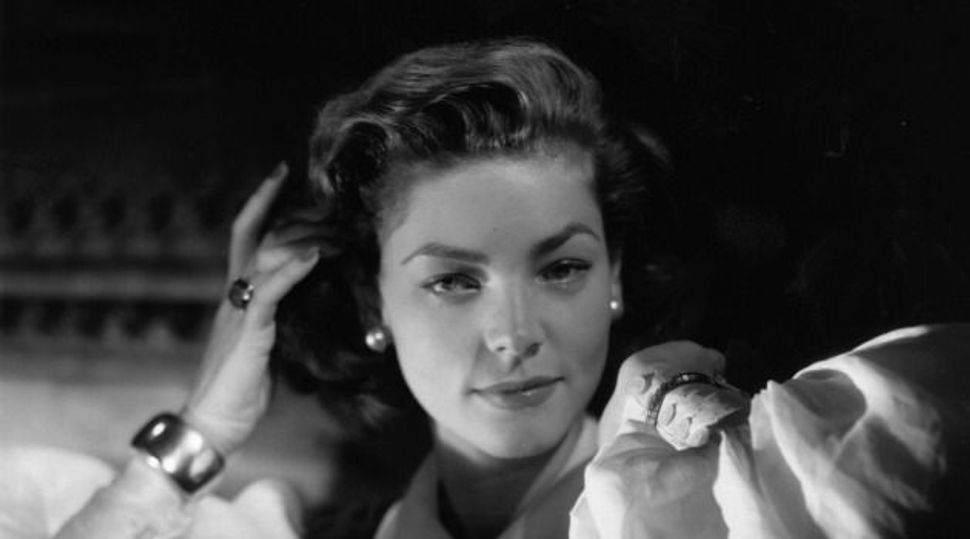 Tougher Than the Rest: Lauren Bacall was born Bette Joan Perske in the Bronx. Image by Getty Images

Born Betty Joan Perske, the daughter of Jewish parents in the Bronx, Lauren Bacall would soon became the epitome of New York cool. She was the slim, caustic partner of Humphrey Bogart, whom she married at the age of twenty and starred with in such films as “To Have and Have Not,” “Dark Passage,” “Key Largo,” and “The Big Sleep,” also known as the best film ever written. Later on, she would reinvent herself as an icon of both camp culture and posh society, putting her husky, singing voice to good use and making appearances in star-studded features of the Agatha Christie variety. She was also, incidentally, the first cousin of Shimon Peres. But right now, as we celebrate the career of Bacall, who would have turned 95 today, we’re less interested in exploring Bacall’s family connections than we are in paying tribute to the characters she played on screen and stage. There were plenty of highlights and lowlights (Barbra Streisand’s 1996 “The Mirror Has Two Faces” actually contained some of each). But these moments, in our completely biased opinion, were among her most memorable:

In the 1940’s, when Humphrey Bogart’s career was at its apex, there were few actors who could come close to holding the screen with him. Bacall proved the rare exception, sparring with him, and usually coming out far ahead. Check out the dialogue in the Howard Hawks adaptation of Raymond Chandler’s noir classic, co-scripted by William Faulkner with Bacall playing the role of Mrs. Vivian Rutledge.

Bacall’s singing voice was, at least two these ears, something of an acquired taste. In fact, a rumor (false) was spread around that in her earliest screen appearance in “To Have and Have Not,” her performances of Hoagy Carmichael songs were actually dubbed by Andy Wiliams. Bacall’s performance in “Applause” won her a Tony Award, and it’s a remarkably, uh, pungent time capsule.

If there ever was a more memorable film debut by an actor, I can’t think of it. She’s most known for her moments with Bogart in Howard Hawks’s very loose adaptation of Ernest Hemingway’s novel, and rightly so, but she displays a wonderful empathy too when she acts alongside Walter Brennan, here playing one of his signature alcoholics.

It would be hard to imagine anyone having a better time watching this performance than Leonard Bernstein did, here celebrating his 70th birthday. But this parody of an Ira Gershwin-Kurt Weill number with new lyrics by Stephen Sondheim is exquisite viewing nonetheless.

5) Murder on the Orient Express

At the height of big budget extravagance and delightfully tacky star-studded murder mysteries, Lauren Bacall’s performance as Mrs. Hubbard, perhaps more than any other film, demonstrated her graceful transition from smart-mouthed youngster to dignified stateswoman. The movie — despite its terrific cast and fine director (Sidney Lumet) — is pretty ridiculous, especially [spoiler alert] the ending. Still it’s worth a look for the performances of Ingrid Bergman, Sir John Gielgud, and of course, Lauren Bacall.

I don’t know if there’s anything one can say about this scene that hasn’t been said before. One of the most famous moments in movie history, and the one that made Bacall a star.