A streak of religious rebelliousness, struggle and redemption runs through his songs, making them sound a little, well, Jewish 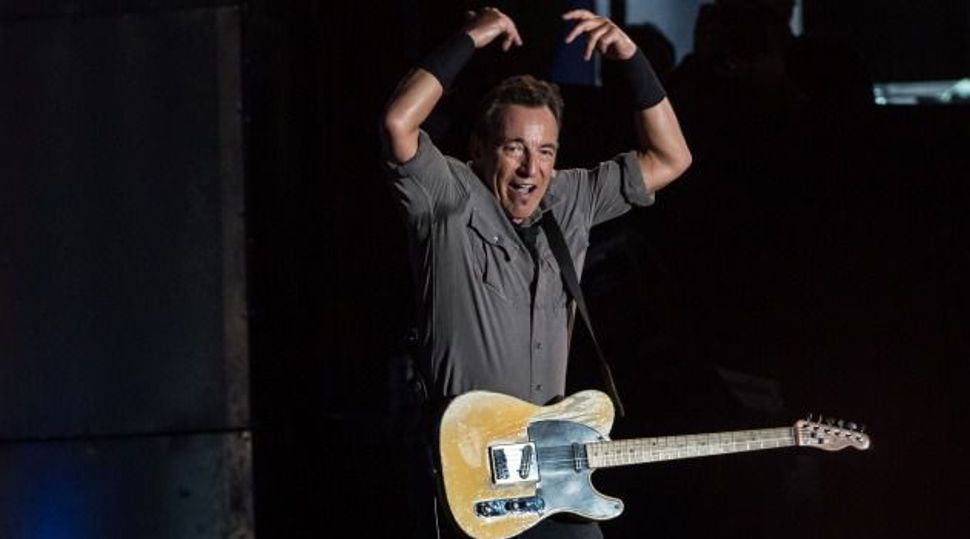 Editor’s note: Bruce Springsteen was born on Sept. 23, 1949. On the occasion of his 73rd birthday, we’re revisiting this 2019 story on the Boss’s Jewish influences.

It wasn’t all that long ago when The New York Times misspelled the Boss’s last name as “Springstein,” reminding those of us old enough to remember that, early in Bruce Springsteen’s career, it was commonly thought — or secretly hoped by some — that this rock ’n’ roll messiah was Jewish. That rumor, given further credence in this year’s film “Blinded by the Light,” was put to rest for good once Springsteen’s 1975 breakthrough album, “Born to Run,” garnered him the cover stories of both Time and Newsweek magazines in the same week. Besides fitting Springsteen for Elvis Presley’s fallen crown, the articles revealed little-known biographical facts including, alas, that Bruce was Italian on his mother’s side and Dutch-Irish on his father’s.

Still, there was something about his early street-poet vibe; the dazzling, Dylan-esque wordplay (albeit soon abandoned for a simpler, more straightforward vocabulary); the Lou Reed-like punk in his strut; and the suburban New York/New Jersey fellowship among the members of the E Street Band that was very familiar, almost haimish, suggesting that Springsteen was, if not a member of the tribe, at least a close haver, and one who in fact occasionally plays “Hava Nagila” in concert.

From the beginning of his career, Springsteen surrounded himself with Jewish managers, producers and musicians. Mike Appel scored the Boss his deal with Columbia Records (where he was signed by John Hammond — the same talent scout who nabbed a young Bob Dylan — deftly steering his career through “Born to Run”). Around which time, then-rock critic (and Brandeis University alumnus) Jon Landau — he of “I saw rock and roll future and its name is Bruce Springsteen” fame — took the reins as Springsteen’s producer, confidant and, eventually, manager.

Springsteen’s recording engineer on his first two albums and for the earliest sessions of “Born to Run” — including the title track — was the Israeli Louis Lahav. Lahav’s wife, the kibbutz-raised Suki Lahav (now an award-winning author), was likewise an early member of the E Street Band; it’s her klezmer-like keening you hear on the violin intro to the mini-rock opera, “Jungleland.” And the E Street band’s pianist, Roy Bittan, a New York native, once said that the secret to his own distinctive playing is that his “sound is that of a little Jewish kid with an accordion.”

The best-known member of the E Street Band, next to the late saxophonist Clarence Clemons, is perhaps drummer Max Weinberg. Anyone not already familiar with Weinberg’s skin-pounding for the Boss discovered him as the longtime drummer and leader of the house bands on Conan O’Brien’s late-night TV talk shows. Weinberg, whose parents ran a Jewish summer camp called Pocono Highland — and whose first public appearance as a drummer was at age 7 when he sat in with a bar mitzvah band — has also enjoyed a small sideline career as a motivational speaker, often speaking to Jewish groups, before whom he calls the E Street Band “the greatest bar mitzvah band of all time.” (Indeed, you can hear Springsteen himself addressing this notion on the recording, “Bruce Springsteen & The E Street Band: Live in New York City,” when he ecumenically tells the crowd, “I’m gonna throw a rock and roll exorcism… a rock and roll baptism, and a rock and roll bar mitzvah!”)

But it’s not just the Jews who Springsteen surrounds himself with that lend him the aura of Jewishness. It’s the streak of religious rebelliousness, struggle and redemption that runs through his songs. From 1978’s “Adam Raised a Cain” through 2012’s “Rocky Ground,” in which he sings, “Forty days and nights of rain have washed this land … Flood waters rising and we’re Canaan-bound,” the Boss has often worn the vestments of an Old Testament prophet, drawing extensively on Biblical imagery for his rock ’n’ roll odes to salvation and transcendence. Like the prophets of old, Springsteen speaks to and for the downtrodden, the forgotten and the oppressed — war veterans, the homeless, addicts, laid-off autoworkers, people with AIDS, victims of economic dislocation and those who perished or lost loved ones on 9/11.

In addition to all this, Springsteen himself talks about his work in language remarkably similar to that of modern-day discussions of tikkun olam, loosely translated as “fixing the world.” In an extensive profile in the New Yorker in 2012, the Boss told writer David Remnick, “We’re repairmen — repairmen with a toolbox. If I repair a little of myself, I’ll repair a little of you. That’s the job.”

Remnick also spoke to Jake Clemons for his profile of Springsteen. The nephew of Clarence Clemons, to whom the latter’s saxophones were passed down and thus can still be heard roaring at Springsteen concerts, says, “A Springsteen show is a lot of things, and it’s partly a religious experience. Maybe he comes from the line of David, a shepherd boy who could play beautiful music, so that the crazy become less crazy and Saul the king finally chills out … There really is a component of Bruce that is supernatural. Bruce is Moses! He led the people out of the land of disco!”

Springsteen himself has used the Moses comparison overtly in at least two of his own compositions: In “Red Headed Woman,” he sings, “I was Moses standing ’fore the burning bush,” and in the aptly titled “Leap of Faith,” he proclaims, “You were the Red Sea, I was Moses.” Moses, of course, led his people to the Promised Land, which also happens to be the title of one of Springsteen’s most enduring anthems and a staple of his concerts. It remains to be seen if, like Moses — who only glimpsed it from afar — he’ll ever actually get there. Springsteen has yet to perform in Israel.