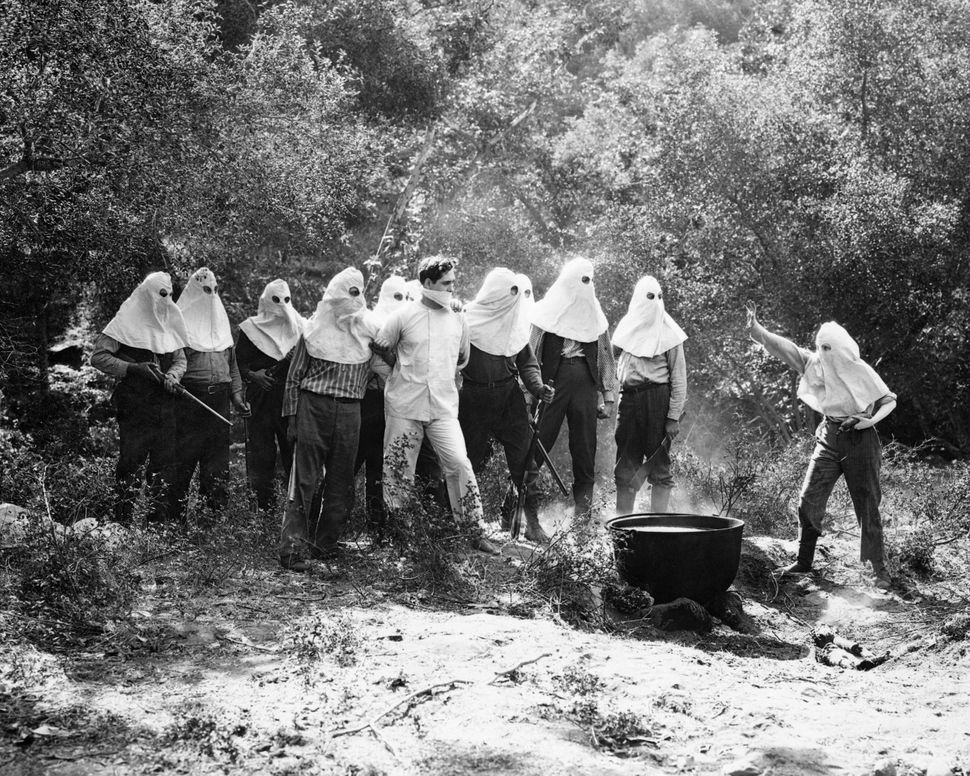 A scene of the Ku Klux Klan in D.W. Griffith’s “Birth of a Nation.” Image by Getty Images

The Accusation: Blood Libel in an American Town

On September 22, 1928, a four-year-old girl, Barbara Griffiths, got lost in the woods around Massena, a small town in upstate New York. Hundreds of townspeople joined in the search. Hours later, someone (to this day, no one knows who) suggested that the child might have been the victim of a ritual murder committed by members of Massena’s Jewish community – and the authorities took the accusation seriously.

The so-called blood libel – the scurrilous notion that Jews used the blood of Christian children for rituals – originated in medieval Europe. But, according to Edward Berenson, a professor of history at New York University, the Massena case was unique in the United States, and therefore deeply threatening to both Jewish residents and national Jewish leaders.

Berenson says his great-grandparents, who emigrated to Massena from Eastern Europe in 1898, may have been the town’s first Jewish settlers. He himself was born there, giving him a strong emotional connection to the story. As it happens, there’s not much to the Griffiths incident: The girl was found alive, Massena’s mayor apologized to the Jewish community, and life went on. Berenson’s achievement in “The Accusation” is to contextualize the Massena blood libel in multiple provocative ways.

Berenson offers a concise history of the origins of the blood libel in Europe, as well as its modern recurrences. He surveys both anti-Semitism and anti-Catholic sentiment in the United States, noting the divisiveness of the 1928 presidential election. And he uses the social and economic history of Massena to try to fathom why this grotesque charge should have emerged there, of all places.

The idea of ritual murder, Berenson tells us, originated with the 12th-century treatise of an English monk, Thomas of Monmouth, who credited his account to the questionable testimony of a disillusioned Jew. The slur would acquire a literary patina in the 15th century in one of Chaucer’s “Canterbury Tales.”

Berenson suggests that the first real “blood libel,” positing “the supposed Jewish need for Christian blood,” occurred in the central German town of Fulda. There, on Christmas Day in 1235, he writes, “five Christian boys died in a fire, and the local Jews were accused of killing them to harvest their blood.” Three days later, 34 Jews were tortured and killed in retaliation, setting a pattern of violent retribution that would reverberate for centuries. Berenson’s discussion of the libel’s periodic resurfacing, its enshrinement in Christian art and what he calls “social knowledge,” and the resulting consequences for Jews makes for horrifying reading.

“The absence in the United States of any social memory of ritual murder makes the Massena blood libel puzzling at best,” Berenson writes. But he adds that it may be explained, in part, by the large number of immigrant workers from Europe and neighboring Quebec, where Jews faced fierce anti-Semitism.

Bordering the St. Lawrence River, Massena got its first industrial boost from the building of a power canal. That project attracted immigrant labor and the Aluminum Company of America, or Alcoa, which became the town’s lead employer. By contrast, most of the town’s Jews worked in retail, provoking “both resentment and admiration.”

Berenson stresses the United States’ history of religious tolerance. Jews suffered rhetorical slights and “social discrimination of unprecedented scale,” but, he argues, “little physical or material harm.” (A notable exception was the 1915 lynching of Atlanta factory superintendent Leo Frank, convicted in the murder of a 13-year-old girl, but now regarded as innocent.)

One rhetorical controversy was sparked by Democratic presidential candidate William Jennings Bryan, who, in an 1896 attack on the gold standard, famously declared: “You shall not press down upon the brow of labor this crown of thorns, you shall not crucify mankind upon a cross of gold.” Jewish leaders took umbrage, while Bryan, despite his previous disparagement of Jewish bankers, “denied any anti-Jewish intent.”

Berenson chronicles the reinvigorated Ku Klux Klan of the 1920s, which targeted African Americans, Catholics and Jews. “That the Massena blood libel took place in 1928 was no accident,” he writes. “It occurred at the beginning of one of the ugliest and most intense electoral campaigns in United States history,” pitting the Republican (and Protestant) Herbert Hoover against the Democratic Irish Catholic Governor of New York, Al Smith. The campaign stoked Klan activity, including in Massena, and KKK members “might have spread the rumor of Jewish ritual murder, even if they didn’t necessarily initiate it.”

Corporal H.M. (Mickey) McCann, the state police officer who directed the search for Massena’s missing girl, reported that the ritual murder accusation originated with a “foreigner” in town. He and the mayor, W. Gilbert Hawes, both gave it credence – at least enough that they interrogated the town rabbi, Berel Brennglass, who forcefully rebuffed the charge.

Berenson managed to interview surviving Massena residents from that era. (That included Barbara Griffiths Klemens, who had no memory of her wanderings in the woods.) Alice Rosen, at 102, recalled that the ritual murder accusation convinced the town’s Jews that “a pogrom was imminent.” Doris Robinson, 94 when Berenson spoke to her, had no direct memory of the blood libel, but remembered other anti-Semitic slurs that occurred in its wake.

Berenson concludes that the widespread revulsion against the incident actually buttressed the status of American Jews “at the end of a difficult decade.” By the 1930s, of course, Jews in Europe had far worse problems. But even after the Holocaust, Berenson writes, the ritual murder charge would persist, inflaming anti-Semitic violence in Poland and rearing up, more recently, in Russia, Italy and the Middle East.